Today, guest writer Lea Harris, who you might know as BakersBunny, shares her visit to Souq last week. I would have loved to be there with her but was in bed with a cold. What did I miss out on? A lot more than food. 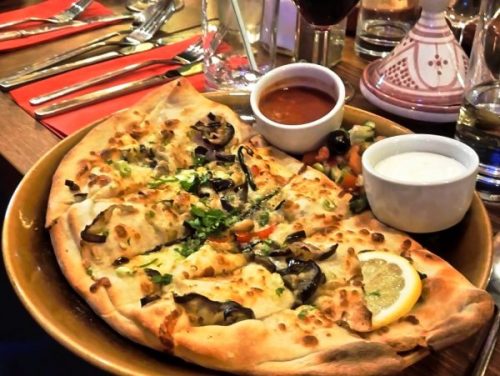 To define Middle Eastern food is not as simple as one first thinks. There are similarities between various countries, even continents; Greece and Turkey share a passion for mezze – hot and cold dishes that features the likes of hummus, dolmades, aubergine and yoghurt based dips. Each country calls them by different names but essentially, they are virtually the same. The boundaries don’t stop there as, to me anyway, tagines are a Moroccan staple, however it is also part of Arabic culture; it’s even mentioned in the 9thC, ‘One Thousand and One Nights’. 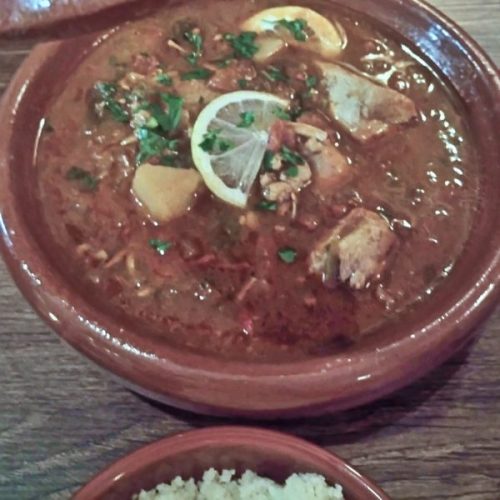 Chicken tagine – brown food is so unphotogenic but tastes fab!

All good in my books, and it was a delight to be invited to Souq (sister restaurant to Hanam’s, Pomegranate and Laila’s Bistro), over on the Southside of Edinburgh, for the official launch of #SouqSaturday, an evening of belly dancing, traditional food and good company

I wound my way through the bustling restaurant to be seated with some fellow bloggers. Nibbling on olives as we perused menu, staff took our orders for mocktails (you can BYOB). I opted for a San Francisco, a refreshing blend of grapefruit juice and grenadine that arrived swiftly as had my deliberation as to what to eat. 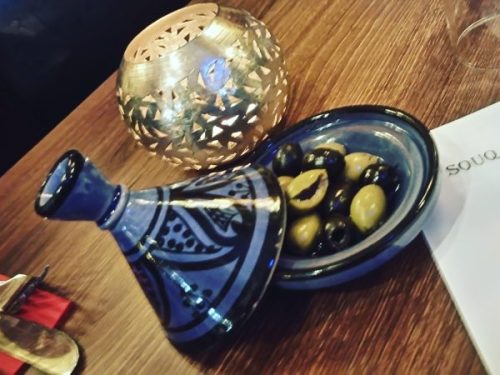 I wasn’t disappointed with my Qarnabit – fried cauliflower with whipped feta, not something I’ve had before; it wasn’t the most elegant dish but it was delicious with the florets retaining some bite, the cheese dip adding a salty tang. Consensus on the falafel was that they were a bit dry but the hummus provided some lubrication. In true Middle Eastern style, portion sizes are generous.

While waiting for our mains, we were entertained by three gorgeous belly dancers – Natalie, Moyra and Lorna. Trying to get a decent photo proved impossible as they swirled and swished with such fervour, it made my head spin. I don’t think anyone sat still, swaying in our seats as we admired the stamina and suppleness of the performers. 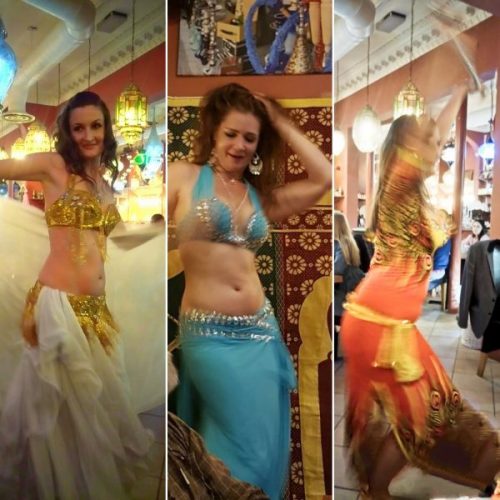 Shaking their stuff: Natalie, Lorna and Moyra demonstrates the art of the belly dance.

Our table was laden with terracotta tagines that, when the lids were lifted, aromatic scents of spice filled the air. Plump succulent chicken with potato and lemon had plenty of moorish (as in can’t stop eating!) sauce in which to dunk homemade bread. I, on the other hand, had Soujuk – spicy Lebanese sausage with tomatoes and green peppers. Spiced with cumin, this was a robust dish packed with thick slices of sausage; simple fluffy couscous was the perfect foil for juice-soaking. I could have easily have chosen the rather fine looking Vegetable Fataya, a flatbread topped with peppers and aubergine, that was being tucked into by one of the other guests. It looked good! 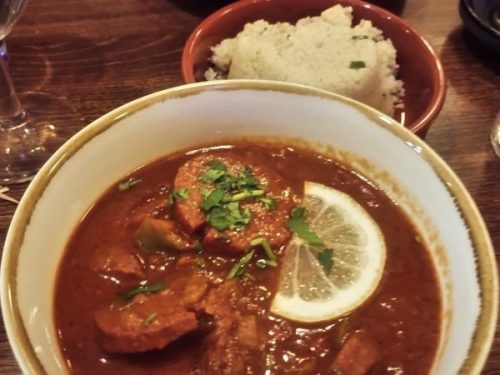 A quick change of costumes and the dancing commenced once again. This time a Saidi dance with sticks. Lorna and Moyra twirled with precision, missing our heads by a hairsbreadth. It’s a form of Egyptian martial art and is even depicted in ancient tomb paintings and normally performed by men. Natalie glided around the room, dancing with finger cymbals; each one tapping a different beat, a bit like patting your head and rubbing your belly at the same time, not an easy task. Their outfits were as vibrant as their vivacious movements. They were mesmerising, and it’s not long before we were encouraged up on the floor to participate. No me, I’m taking photos! Even owner Jamal joined in the fun. 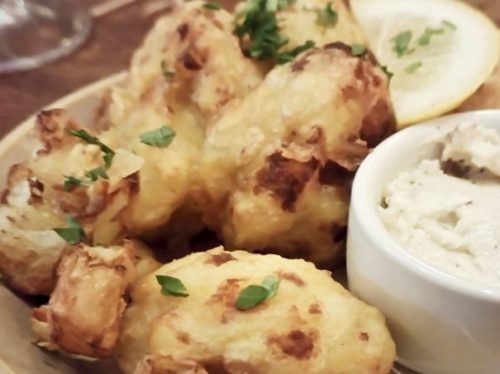 Traditional Dessert with a Twist

Baclawa, Turkish delight and rose or saffron ice cream for dessert were our choices. I had already been told about the Baclawa cheesecake so cheekily asked for that. It was an ok, typical creamy rendition that wasn’t unpleasant just a bit plain. The nutty pastries were a slight disappointment, lacking their usual finger-licking stickiness. The rose ice cream was a joy, deliciously fragrant, not too perfumed and a light finish to a rather filling meal.

What Else to Expect

Souq not only offers their Saturday set menu but you can enjoy breakfast, lunch, even an afternoon tea as well as dinner. It’s recommend that you book a table if you fancy dancing the light fantastic on a Saturday evening.

Lea dined at the invitation of Souq and Citylicious.

A bit about Lea Harris: Food is my passion; in words, pictures, cooking, eating but most of all in sharing! First person from Scotland to be on The Great British Bake Off – Series1