When you’re single, Sunday roasts are a rare thing so I jumped at an invitation to join other foodies at the Captain’s Table at the newly opened Chop House in Bruntsfield for a celebration of the best of British beef, with all the trimmings, accompanied by cocktails and wines. Who could refuse such an invite? 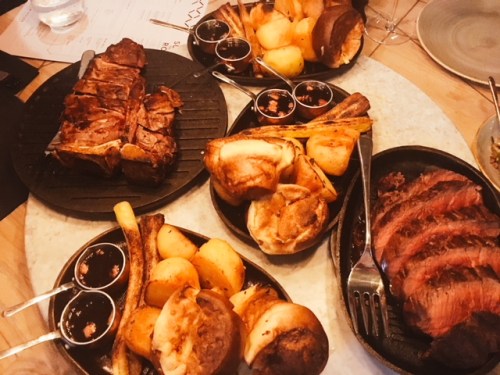 The new restaurant, the third Chop House opened by the Compass Group, overlooks Bruntsfield Links, which looked pretty as a picture, adorned with blooming daffodils.

The new space occupies premises that used to be TriBeCa.   It’s a light and airy space, with floor to ceiling windows, and while it has similarities to Chop House’s other two sites (in Leith and Waverley Arches), with its industrial design and exposed steel work and striking orange, leather seating, it still manages to maintain its individuality.

On the ground floor, there’s a welcoming bar, with an expensive looking, custom-made marble top that is central to the upstairs space, where it’s possible to dine on beautiful freshly shucked Loch Fyne oysters, alongside champagne or a glass of rose Italian sparkling wine or one of their rather wonderful cocktails.   It’s also possible to dine at one of their raised banquets, with the distinct orange, leather seats.

Downstairs is a further dining area, which seats 40, with various table combos and the rather special Captain’s Table, which can seat up to eight.

Known for its sociable style of dining, Chop House serves large cuts of beef, starters and sides designed to be enjoyed by the whole table and the round Captain’s Table, with the central Lazy Susan, provided the perfect setting for sharing great food and chat.

The beef is definitely the star of the show.  Dry-aged on the premises and butchered in-house, they source most of it from Shaws in the Borders, with supplementary supplies from Aberdeenshire Highland Beef and Hannan Meats in Ireland.

All their beef is dry-aged for a minimum of 35 days and up to a maximum of 90 days. It is then cooked over charcoal at around 450 degrees centigrade.  Don’t miss having a sneaky peak at Chop House’s signature cuts of beef as they are dry-aged in Himalayan salt, next to the kitchen, and where you can also catch a glimpse of the beef being grilled over hot coals on the Josper grill. 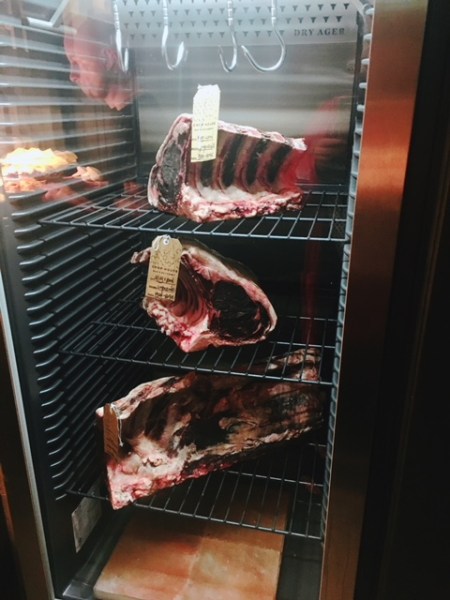 Chop House certainly pulled out all the stops, giving us an experience like no other.  There’s such attention to detail from the beautiful wine glasses, which enhance the drinking experience, and properly weighted cutlery and Laguiole steak knives, which all add to the dining experience.

Our perfect afternoon started with a glass of Da Luca Rosato Spumante, enjoyed sitting at the main bar, whilst appreciating the light airiness of the restaurant, with its floor to ceiling windows.  A sparkling Italian wine made from a blend of merlot and raboso, it was as pretty as a picture with its girly pink hues, and had fresh and vibrant raspberry and strawberry notes; the perfect welcoming drink.  I’ll be searching this bottle out again. 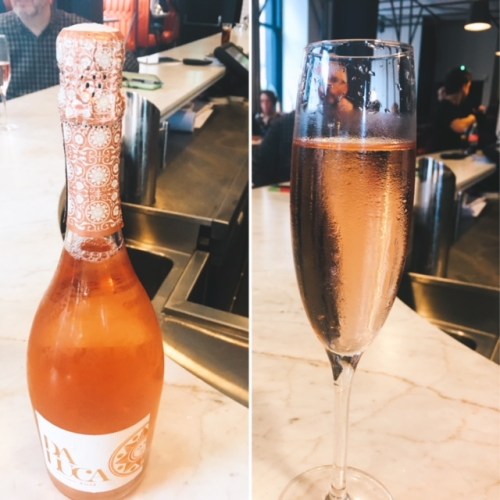 A glass of Da Luca Rosato Spumante, the perfect aperitif

We then made our way downstairs to the Captain’s Table, and were treated to one of Chop House’s signature cocktails, a Rosato Spritz made with RinQuin Peach Liqueur, Cocchi Rosa vermouth, strawberry and rose cordial, lime and Rosato Spumante.  Again a real crowd pleaser, with more pink hues, offset with the garnish of fresh rose-petals, it certainly appeared to the girls around our table and there weren’t any complaints from the boys either. 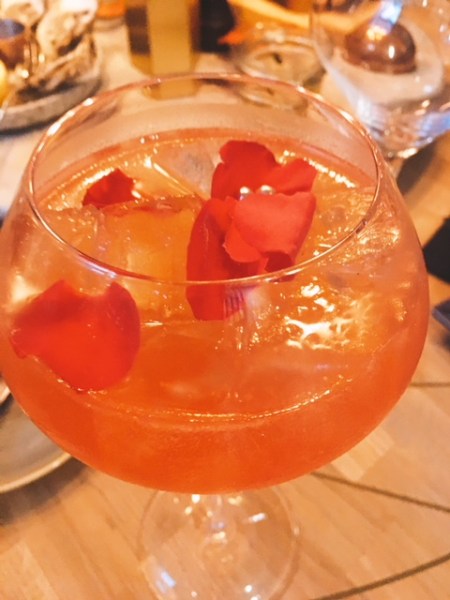 We started off with some bread, served with luscious marrow butter and some Gordal olives, which come served in small Kilner jars.  Even if you can’t stand olives, do try these. Gordal actually means the ‘fat one’ in Spanish and describes these perfectly.  Pitted olives, they come with a gentle kick from the Guindilla chilli in the marinade and are the only olives that I enjoy.  If like me you get a taste for them, Harvey Nichols stocks them in their food hall. 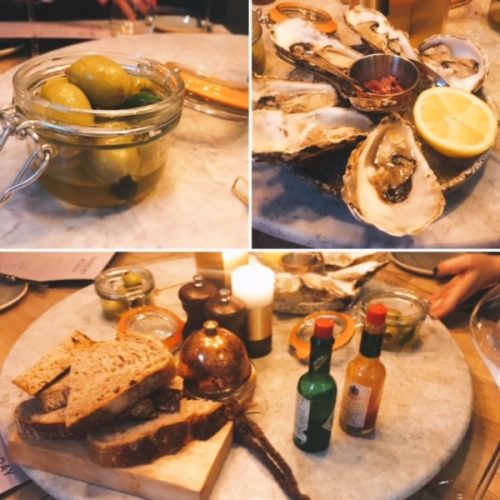 We were then treated to an array of seafood starters which included: scallops and pigs cheek with apple slaw and celeriac; Loch Fyne oysters served with Tabasco; and crispy shrimps with an IPA termpura batter, with a Bloody Mary ketchup, described by one of the table as rather like a ‘posh scampi’.  I think they were delicious but you’ll just have to take the rest of the table’s word on this one, as with my seafood allergy, I wasn’t going to risk it. Judging by the empty plates, I don’t think there were any complaints. 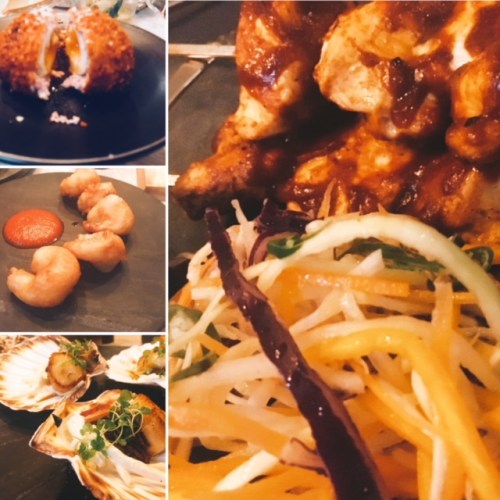 Chop House’s Scotch egg is something else

Instead, I got to sample the short rib Scotch egg with burnt onion mayonnaise and the chicken skewers with whipped blue cheese.  Both were superb with the Scotch egg, always a favourite snack of mine, having its own individual take with a short rib beef casing rather than the usual sausage meat. The egg was cooked to perfection and the yolk oozed out when cut into.

Then came the pièce de résistance, two choices of Chop House’s signature sharing cuts, the Porterhouse and the Chateaubriand, both cooked medium rare. The Porterhouse is a sharing rib-eye steak , which had great flavour, with sirloin on one side and fillet on the other, cooked medium.  It cut like butter and oozed flavour while the Chateaubriand was a thick sirloin fillet cut.

Tara, Chop House’s Assistant General Manager, had chosen a rather quaffable red rioja to accompany our beef, ‘The Innocent Man’ from producer, Casa Rojo. Made from tempranillo with some mazuelo, it had notes of red and black berries. We drank this throughout the meal.

Both the cuts were served with all the roast trimmings: large roast potatoes with a crispy outside and a perfectly soft inside, although I would perhaps have preferred smaller ones (but that’s just personal preference); honey roast carrots and parsnips; buttered greens and a well-cooked yet fluffy Yorkie that was enhanced by the little skillets of bone marrow gravy poured onto it. This gravy was thick and unctuous and the perfect accompaniment for the meats.   We were also indulged with some of their other sauces to try: bearnaise, peppercorn, and chimichurri but in my opinion the bone marrow gravy is just perfect.   Beware the chimichurri sauce, it’s pretty spicy.

The food was so good, we even found room for dessert

And despite us all being pretty full, our host insisted on us having dessert and organised a sharing platter of homemade marshmallow and crispy donut balls, served with a dipping fondue of salted caramel sauce, served in a small, cast-iron pot.   Say salted caramel to me and I’m sold, although many places only play lip service to the flavour, Chop House really know how to properly salt a sweet sauce. I truly was in seventh heaven. 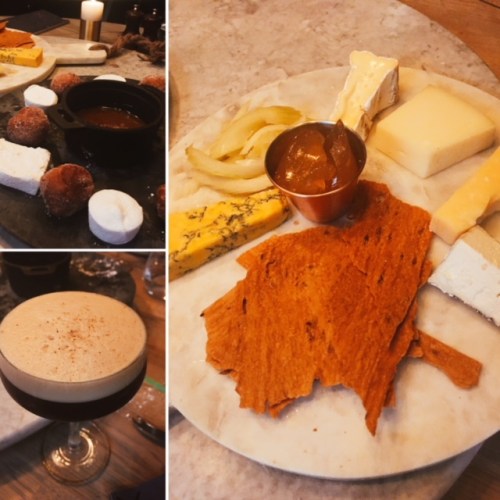 Marshmallows, donuts and salted caramel sauce; a selection of I J Mellis cheeses; and an espresso martini completed the perfect afternoon

We finished with a plate of cheeses to share, accopmanied by thin fennel crackers and a tart cider jelly.   The cheese have all been picked for Chop House by cheesemongers, I J Mellis, renowned for their range of farmhouse cheeses. They were washed down with a final cocktail, in my case a decaffeinated Espresso Martini. Sadly, I’m one of those ‘wusses’ that won’t drink coffee after 2pm, if I want to guarantee I’ll sleep and even then, I had a restless night!

The cheeses caused quite some debate at the table as to why there were no Scottish cheeses on the menu but frankly by this time, I didn’t care a hoot!  They were the perfect end to my meal.

The choices on offer gave a nod to the best of different styles and textures. We tried the Baron Bigod (England), a buttery brie style cheese made from milk from grass-fed cows; the Shropshire Blue, a vegetarian cheese (England), which had a lovely piquancy to it without being overbearing; the Dorstone goat’s cheese was tangy, just as it should be; the Ossau Iraty was a ewe’s milk cheese from the Basque region of the French Pyrenees; whilst my favourite was the Prima Donna from Holland, which combines the fruitiness of Parmesan with the creaminess of an aged Gouda, a cheese I have tried many times as my brother lived in Holland for half his life. 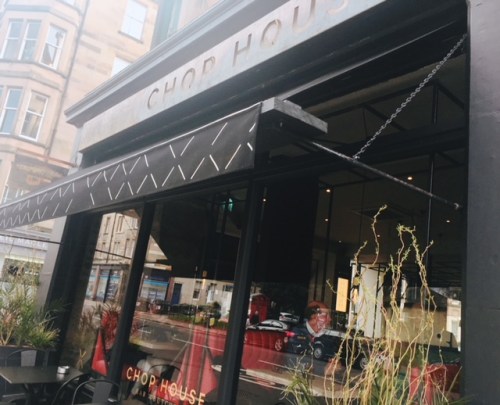 Even if you don’t live this side of town, go out of your way to visit.  If like me you’re a sad singleton, who’s craving a good roast dinner, Chop House is definitely the place to enjoy some truly fine beef and make good memories with friends. It won’t necessarily be the cheapest of lunches if you go for the sharing beef cuts (which are priced at market value) but treat yourself.  However, if you want a more affordable option, their Sunday Roast Beef Lunch, served with all the trimmings, costs just £18.50 per person.   I promise you’ll be wowed by great service, location, ambience, decor and of course, the star of the show, its beef. This place is certainly the real deal.  And I’ve already got my eye on their Bloody Mary breakfast for my return visit!

Kerry dined as a guest of Chop House