South Africa will always hold a special place in my heart, having spent six months there retraining in a complementary health technique, Body Stress Release in 2003. I waa also lucky enough to return again in 2005 on a two-week trip visiting some of their best safari lodges and various wineries. So when I received an invitation to a tasting of South African wines at one of my new favourite restaurants, Fazenda on George Street, this was one invitation worth taking a day off from the day-job. 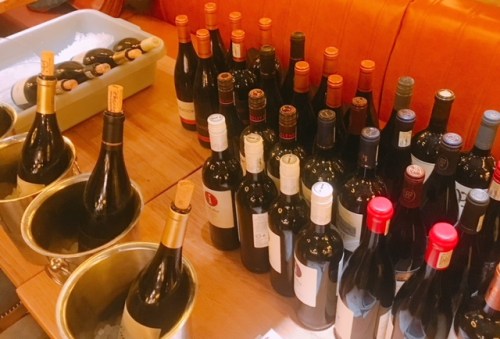 An afternoon of some serious South African wine tasting at Fazenda

Fazenda’s  driven passion for wines has led them to distant continents, far from their native South America; strengthening their love for the new world. 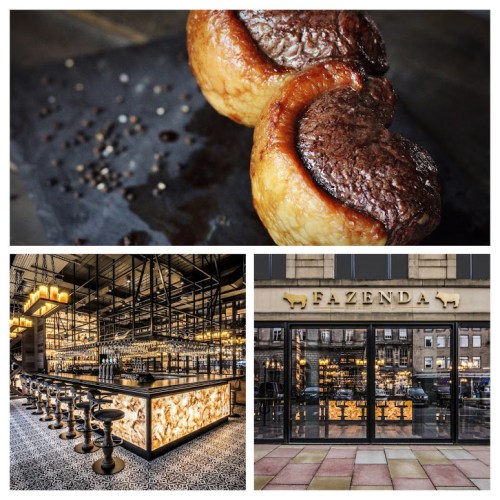 What an afternoon tasting wines of South Africa at Fazenda

The other assembled guests of bloggers, journalists and sommeliers from the trade were in for a real treat, tasting 13 of the finest wines of South African from areas including the Hemel and Aarde Valley and Stellenbosch, whilst enjoying all the tradition behind Fazenda’s unique Brazilian way of serving. 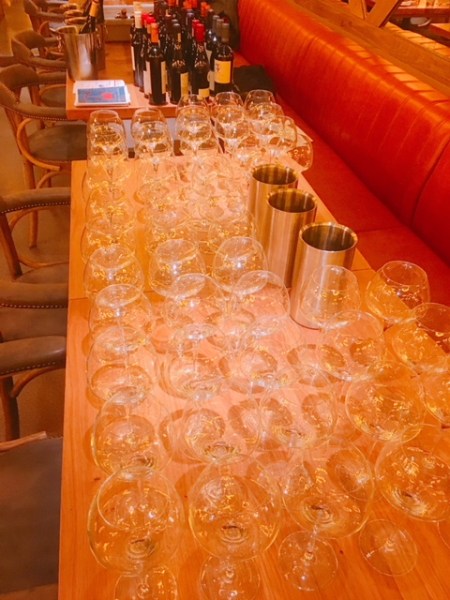 We were joined by Carolyn Martin from Creation Wines, Tom Hanson-Smith from Journey’s End Vineyards in Somerset West, Simon Briggs from Great Grog and Jo and Claudia from trade body, Wines of South Africa U.K., who shared their passion for these wines, the vineyards and brought the experience to life.

South Africa is enjoying a wine renaissance and is often regarded as the most exciting wine producing nation in the Southern Hemisphere.

The first serious plantings of vines in the New World were in the Dutch colony of the Cape which was subsequently incorporated into  South Africa. This was an essential re-victualling point for the Dutch East India Company ships on their way to Java, and as early as 1654, the Governor Jan Van Ribeck planted vines for wine production.

With this rich history that goes back over 360 years, in addition to its Dutch influence, it also draws on German, Italian and French influence, embracing all the best traditions of the Old World Wines, while still exploring New World styles.

Overall, the climate is favourable to grape growing, though irrigation is frequently necessary. It has a unique terroir and landscape: 500 million-year-old soils (the oldest in the world) are rich with life and diversity: the Atlantic Ocean off their west coast and the Indian Ocean bring sea breezes, mist and fog; mountain slopes and valleys offer micro- and macroclimates, with varying degrees of sunshine and shelter.

The most widely planted quality black grape variety is Cabernet Sauvignon. Hermitage (Cinsault) is also important and this has been crossed with Pinot Noir to create the indigenous South African Pinotage. Other red varieties include Merlot; Shiraz and Pinot Noir.

And of the whites, the dominant Chenin Blanc, is very versatile and, as in the Loire, can make either sweet or dry wines. In fact, South Africa has the most Chenin plantings anywhere in the world.

Chardonnay was a comparative latecomer but is now widely planted, as are Sauvignon Blanc,  Semillon, Viognier and Rhine (or Weisser).  Hanepoot is the local name for Muscat of Alexandria, which is the most widely grown variety for dessert wines.

Carolyn Martin (and with a long family history of wine-making), and wife to Swiss winemaker Jean-Claude (JC) enlightened us and delighted sharing the uniqueness of Creation Wines.

In 2002, the two of them travelled the rustic Hermel-en-Aarde Road that winds its way along the slopes and valleys of the scenic Babylon Toren Martin. What they discovered at their journey’s end surpassed their wildest dreams: a small, undulating tract of virgin land, perfectly suited to winegrowing, yet never planted with vines before.

Having brought their ‘little piece of heaven’ in this highly acclaimed maritime wine region, JC set out with Swiss precision to establish the first vineyards. Initially, 22 hectares of prime land, 300 metres above sea level, some 9 kilometres from the cold Atlantic Ocean, were selected and planted with virus-free strains of the finest varietal clones.

The custom-designed, ultra-modern cellar was completed in time for the 2007 harvest and since then Creation has established itself as a trendsetting winery, currently offering a range of ten exceptional wines; an exciting safari to discover Creation on foot; to the unique opportunity to create your own wine blend; and various wine and food pairing events.

Of the Creation Wines we tasted, I loved the Art of Chardonnay 2016. With 100% Chardonnay grape and only 3,700 bottles created, this was a particularly special wine for me to taste. With an element of limestone minerals and flintiness, the nose of roasted almond married well with vanilla and oak and was absolutely stunning. At £63.80 sadly though, it’s one for a special occasion but worth every penny.

Wines with a conscience

Carolyn was keen to make the point that whilst some of their wines may not be ‘cheap’, as a business they want to ensure that the farm-workers get paid a decent living wage, so there’s more to the cost of a bottle of wine then you may think.

In its quest to give back to the community, Creation is a founder member of the Hemel-en-Aarde Community Project (HEACP) and plays a leading role in HEACP’s objectives to improve the standard of education, health, social and recreational services to the children and families in the area.

The Journey’s End estate is a stunning boutique winery and vineyard located on the Shaapenberg hills of Stellenbosch – recognised as some of the best terroirs in South Africa. In 1995 the Gabb family (originally from Shropshire, UK) purchased this picturesque wine farm surrounded by 20 hectares of gorgeous vineyards. There has been continued investment in vineyards, and a new solar-powered winery, with the estate now 120 hectares in size. Their aim is to create top quality single-vineyard and appellation wines that are intricate, integrated and true to the terroir of the vineyards and climatic benefits of the region. At Journey’s End, they produce a 3-tier range.  ‘The Cellar Range‘ consists of the Haystack Chardonnay, Weather Station Sauvignon Blanc, Huntsman Shiraz / Mourvedre / Viognier and the Pastor’s Blend (BDX). Their ‘Estate Range‘ consists of four varietal wines (Chardonnay, Merlot, Shiraz and Cabernet Sauvignon), made from carefully nurtured vines of their low yielding vineyard sites. Their ‘Icon range‘ sits at the top – with very small parcels of ‘Destination’ Chardonnay, ‘The Cape Doctor’ Cabernet Sauvignon and ‘The Griffin’ Syrah being produced.

I loved the Cape Doctor Cabernet Sauvignon 2012. A well-balanced style of 100% Cabernet, it developed characters of mineral, herbaceous, and jammy blackberry fruits. With medium+ acidity, it was full-bodied, had high alcohol and the tannin was soft and ripe. This paired really well with Fazenda’s Cordeiro, the lamb grilled with just a touch of mint sauce.

Simon Briggs described on Great Grog’s website as ‘a ridiculously chirpy Teesider’ . . . ‘who loves a drop of wine most minutes of the day and tends to know slightly more about what he’s drinking than the people who made it’, is just as he’s described on the tin.   He was extremely knowledgeable on the variety of wines he presented and was able to wax lyrical about the winemakers, the producers and the grapes.

He had a difficult job, having to present many of his wines against Carolyn Martin’s and Tom Hamson-Smith’s selections, with many of Great Grog’s wines at considerably lower price points, but the wines chosen easily stood up easily against the other producers, had great character and were brought to life by Simon’s great story-telling.

One such example was the Lemberg Lady 2015, tasted after Creation Wines Art of Chardonnay 2016. Made of 52% Viognier, 21% Semillon, 16% Hárslevelü, and 11% Sauvignon Blanc, the wine combined flavours of floral peach and pear fruitiness with honey. The mouthfeel was lightly creamy and smooth with decent acidity and an excellent wine, which paired really well with Fazenda’s Barriga de Porco (Pork Belly, served sliced with honey and cinnamon sauce) and the Sobrecoxa De Frango (Marinated Chicken Thighs). 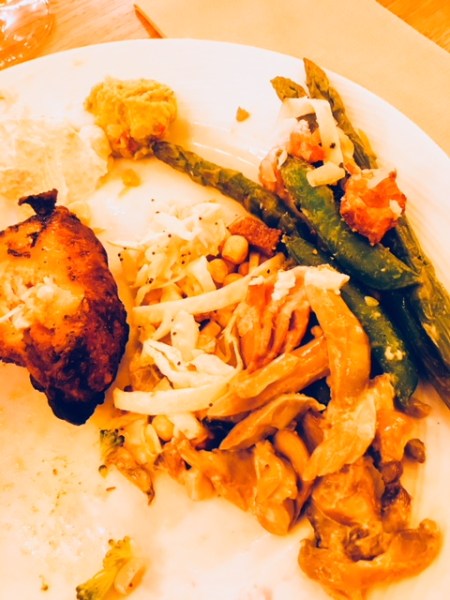 I was unaware of the Hárslevelü grape but it is found within Lemberg’s vineyards and is a rare Hungarian white variety. Released as a single varietal within their portfolio, it also plays a major role in Lemberg’s major white blend ‘Lady’.

I also loved the Indaba Mosaic 2017, made with Cabernet Sauvignon, Merlot, Malbec and Petit Verdot, which ploughs money back into the Indaba Education Foundation, which empowers the most vulnerable children in the South African winelands through transformative education, so whilst you’re drinking wine, you’re doing so with a good conscience.  Once again another good example of a South African wine producer taking its social responsibility seriously.

If you’re looking for some South African wines stockists in Edinburgh, Great Grog is a good bet. They are an internet and telephone wine merchant, situated in their ‘mother-ship’, the wine warehouse on East Claremont Street. They also have a wee wine shop on the Dalkeith Road. By avoiding the high street, they avoid high street rents and can pass on these savings to their customers.

Thank you to Fazenda for the invitation and an incredible afternoon of wine.  I would not have missed it for the world. Whilst I may not have literally escaped to the Cape, the South African producers, winemakers and suppliers have planted a seed that I need to return – so guess where I’m planning my next holiday?  I can’t wait to go back and see how much the wine scene has changed in 13 years.