Mug cake – what’s that all about then?

I was in the baking section of my local super market and did  double-take when I saw the instant mug cake. If there’s a powder version, it must have really made the main stream. It was a rainy, dull day. I decided to do some research and see if there was a pattern to mug cakes. I now have a go-to recipe. 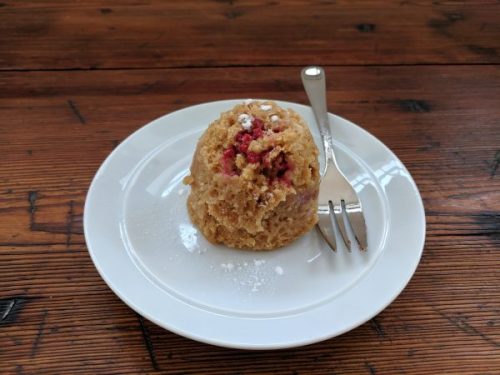 Vanilla and raspberry – simple and satisfying.

The pleasure of mug cake is that it’s fast: you stick some things in a mug, blast it with microwaves and ta-dah! – dessert. If you have to make more than one or two it becomes a faff and you might as well make a cake. But as a near-instant sugar fix, it’s useful. It’s portion controlled, you don’t need any special tools and can use ingredients that re probably already in your cupboard. Having seen the light, I wanted to develop an easy-to-use recipe for my personal online cookbook. 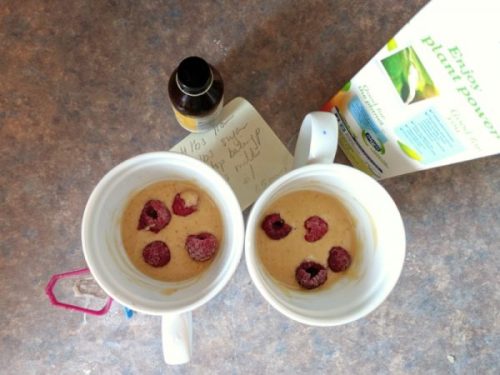 Making mug cakes: all it takes is a mug and a few simple ingredients. And a microwave oven.

I googled dozens of recipes looking for a plain vanilla mug cake. There are lots of different varieties out there, some use egg and butter, some use curdled milk for lift. I opted for a vegan recipe since I wanted a one-cup, minimal mess cake. Extrapolating, I came up with a basic recipe of 3 parts dry to 2 parts wet, or 4 tbsp plain white flour, 2 tbsp soft brown sugar, 0.25 (to a half) tsp baking powder, 3 tbsp soya milk, 1 tbsp oil, 0.25 (to a half) vanilla essence. 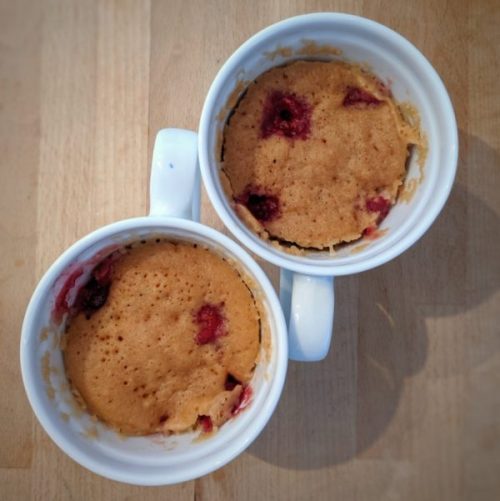 You can serve it straight from the cup. Personally, I think it looks a little pale on it’s own so I like to serve it on a plate. I know. I’m missing the point completely, aren’t I?

The cakes puff up in the microwave, then deflate when they come out. I like to let them sit a few minutes before eating or decanting onto a plate. It gives them a bit more integrity.

Have fun playing with this. 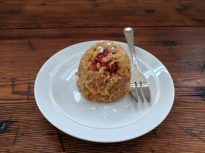 Save Print
Preparation time
2 mins
Cooking time
1 min
Total time
3 mins
This is a basic mug cake recipe that can be adjusted in many ways: swap one tablespoon of flour for cocoa and the raspberries for cherries; add a good pinch of cinnamon for a spiced cake. Add some orange zest or a couple of chopped hazelnuts - have fun.
Author: Caroline von Schmalensee
Recipe type: Dessert
Cuisine: American
Serves: 1
Ingredients
Instructions
3.5.3208