Kitchen Porter, A Night To Remember

If you had asked me two weeks ago about visiting a complete strangers house along with another sixteen people I didn’t know, I would have said you were mad. But this is the concept of a secret supper club, visiting a host in their own home and letting them cook dinner for you.

For us it was a leap of faith into the unknown, not withstanding that we had paid a few days before the meal and for all we knew we could be turning up at a confused pensioners house expecting to get fed!

‘Kitchen Porter’ is one of Edinburgh’s new supper clubs based in a quiet street in Corstorphine. Mark the host is an experienced chef who currently teaches in a local college.

On arrival, we were greeted by Mark and offered a glass of Prosseco and Canapes. There were 2 canapés on offer, the very light and tasty cheese puff was the star of the show. We mingled with the other guests, all of which had never been to Kitchen Porter before.

We were taken through to where we would be eating, a small extention to the house. There were three tables, one of four, another of six and finally a table of eight. We all introduced ourselves to our table companions for the evening. It was a strange mixture of diners, from bankers to a retired Police Officer to a chiropractor. 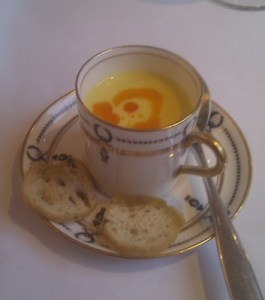 To start with our amuse bouche, sweetcorn and chorizo soup. This was served in a small cup and saucer.

This was a delightful mouthful of sweetness tempured with a few shavings of chorizo. It was the perfect way to start the meal. I delved in with my bread roll to ensure that I managed to get every last droplet of soup out of the cup. 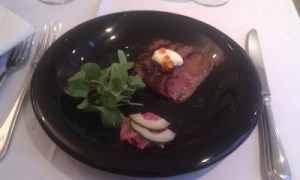 The next course was treacle cured salmon. After endeavouring to try and do this a couple of years ago for Christmas dinner, we were very interested to sample this dish. We were not disappointed, the salmon sliced beautifully into 4 or 5 slices was cured beautifully with the treacle. Not too sweet and not too overpowering.

The pickled onion and cucumber balanced out any sweetness with a sharp tang which tingled the taste buds and made me hanker for more. I could have omitted the side of watercress as that did little for me and some thinly sliced bread would not of gone amiss, but overall I thoroughly enjoyed this. I would say this was the stand out course for me. 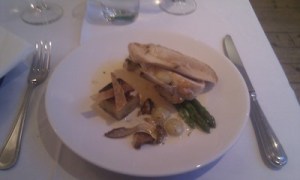 Next up was the confit of chicken leg along with the sliced chicken breast, wild mushrooms, asparagus, dauphinois potatoes, grapes and cream sauce. Unfortunately Mark forgot to put the confit chicken leg on our plates and came through very shyly 2 minutes later with plates of the leg so we could add to our dinner.

The star of this plate was indeed the 2 pieces of chicken fat which had been added to our potatoes and had the same crack in your mouth you would get when eating the finest pork crackling. I must admit to being a tad sceptical about the grapes on the plate but they did work beautifully which the chicken. Mark apologised for the portion size, being slightly too big, I didn’t have a problem with this but my wife couldn’t finish it so I lucked in big style as being able to assist in finishing her plate.

My wife also found the breast of chicken slightly salty, I thought it was perfect so its down to personal taste on that one. The one thing I did find disappointing was the dauphinoise potatoes, these should be oozing with cream and running over the plate, instead we were presented with a cube of potatoes which reminded me slightly of a an overdone Spanish omelette.

Overall I really enjoy my main and I would of licked my plate if it was the done thing… but it wasn’t. 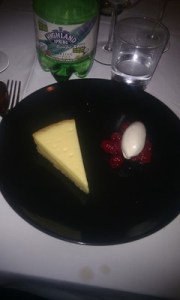 Last but not least was the pud. This was a lemon tart with cream and raspberries. If you like your puddings sweet this wasn’t for you. The best way to describe this was – it draws your cheeks (of your face) together. My wife loved it, she’s a big advocate of tart puds, I could of done with a little bit more sugar. It was served with cream but perhaps some ice cream would of been better.

The general consensus at the table was that it was good, but tart lemon and sharp raspberries didn’t give much contrast and for me it was all too sour.

The meal was rounded off with coffee and chocolates. The coffee was good and strong without being so overbearing that it dissolves your taste buds.

We relaxed, finished our wine and chatted to friends who had been complete strangers 2 and half hours ago. If you get a chance to go to Kitchen Porter go it is well worth it and we will try to go again sooner rather than later. It was a thoroughly enjoyable evening, the food was better than a lot of restaurants that we have eaten in…. I would say its better than a certain Michelin starred restaurant in Fife.

The ambience is certainly better and may I be so daring to say the amuse bouche was better than the pea soup we had at ‘The Kitchin.

Thanks again Mark, your cooking is great and you are a very humble host.