By all accounts Michael Smith cut quite a dash in Manhattan on a recent visit with Visit Scotland. The kilted chef (@Kiltcuisine on Twitter) certainly stood out at the recent Taste of Edinburgh Festival. He was relishing the fact that there were so many real food lovers around that weekend. 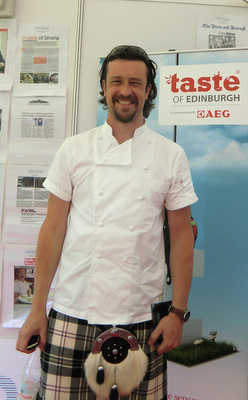 Michael Smith at Taste of Edinburgh

I haven’t yet visited the Three Chimney’s Restaurant on the Isle of Skye so asked him to describe the island.  Michael enthuses about its mystical quality with a sense of intrigue and adventure that captures the imagination and inspires him and each visitor.  It has all that is best about Scotland, mountains, scenery, sea and wonderful produce.  Just avoid the midges during July and August!

It takes a good hour to reach the restaurant once you’ve crossed the bridge. It’s his seventh year at the restaurant. The Three Chimneys has won many awards including the Gold Award for Eat Scotland 2010/2011 and 3 AA rosettes for the last 11 years.

During that time the islanders have diversified crofting to produce a much wider range of local produce. He has up to 60 suppliers and is very happy to have one of them arrive with a small quantity of a superb local product.  He leads a brigade of 10 including himself. His sous chef Kevin has been with him for 10 years. He encourages his team to go fishing especially to hand dive scallops.

And so to  his mission at the show, Inconvenient Cooking.  I think I am a fairly adventurous cook, but must admit I have never cooked a crab myself. Rather than demonstrate a particular recipe at Taste of Edinburgh, Michael decided to show just how to kill, prepare and cook a brown crab. Sunday’s audience were evidently more ambitious than the previous days, as when asked half a dozen people owned up to prepare a crab. He showed a rapt audience how to prepare a brown crab step-by-step. I am certain he has won over quite a few converts! 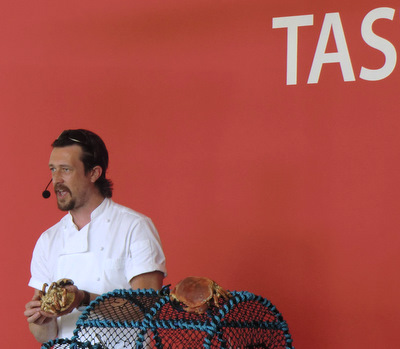 I sure am looking forward to my visit to Skye. Thank you Michael.

The next Taste of Edinburgh will take place between 8 and 12 June 2012.

The Three Chimneys and The House Over-by