The Glorious 12th, the start of the grouse shooting season, sees the start of that wonderful time of year when game is plentiful. As Autumn draws on you might think of rich dishes, stews, casseroles with unctuous sauces. But as we’re still in Summer (!), I’m looking forward to warm salads with delicately flavoured game adding a delicious note or perhaps some venison chorizo. 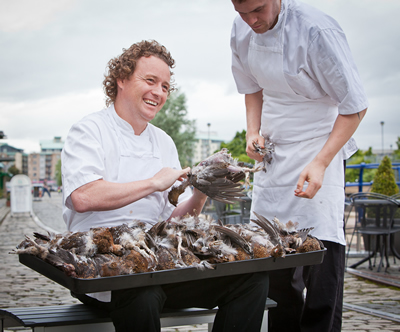 As I am so partial to game, I was interested to hear about a brand new competition for professional chefs to  enter the first ever Game Chef of the Year sponsored by Braehead Foods. The competition was launched by Tom Kitchin on the 12th and is open to any chef in the UK over 18. I’ve you’ve not yet tried Tom’s grouse dishes, get that reservation in quickly.

Not only will four heavy weight chefs who’ll be judging the competition: Tom Kitchin, Martin Wishart, Keith McGillvray and Ian McAndrew. but there will be a live cook off to choose the winner on 30 January 2012 at The Cook School Scotland – I would love to be there on that night!

The first prize is amazing – a trip to the frozen north of Sweden hunting Wild Boar, in the company of Michelin award winning chef, Tom Kitchin. If you’ve tasted great game at your favourite restaurant – make sure the chef enters!

If you fancy cooking game yourself, your local farmer’s market is an ideal starting point – Austin Davies is a regular around Edinburgh. Look out for Great Glen Game products in your local deli or online.

Did you know that game is even good for you as it is low in saturated fat, nutrient-dense and very rich in protein, essential for metabolism, energy, digestion and for proper growth and repair of muscles, bones and tissues. Wild game also contains B vitamins, iron and zinc.