Badger and Co – Making an animal of myself

There’s a new kid on the block at 32 Castle Street in the form of Badger &  Co, a swanky new bar and eatery, which on its official launch night, was packed with the ‘it’ crowd and lots of bearded hipsters.

Boasting its credentials as the former home of Kenneth Grahame, the author of the classic children’s novel, The Wind in the Willows, the riverbank characters adorn the walls throughout, as well as a charming mural by local artist Chris Rutterford on the wall of the outside smoking area. Just a pity that to enjoy it, it has to be shared with the smokers!

Original Wind in the Willows mural by Chris Rutterford

But don’t worry about standing out from the crowd if you’re not a trendsetter, Badger & Co, with its period features mixed with contemporary bar design, makes an equally pleasant venue for breakfast, lunch or dinner with your mother, colleagues or a group of friends.

They also keep waste to a minimum and use as much of the ingredients as possible, creating “nose to tail” dishes which are sustainable as well as tasty.

I was looking forward to trying the whole roast suckling pig that had been promised on the launch night but it seemed to be off the menu so I had to suffice with the delicious canapes including rabbit hearts on croutons, instead.

I had dropped in, pre their launch night, with a group of friends for a late Sunday ‘tea’. Their gourmet pies are worth seeking out. On offer was a Scottish game, a vegetable patch and a Borders chicken and leek pie, which was to die for. 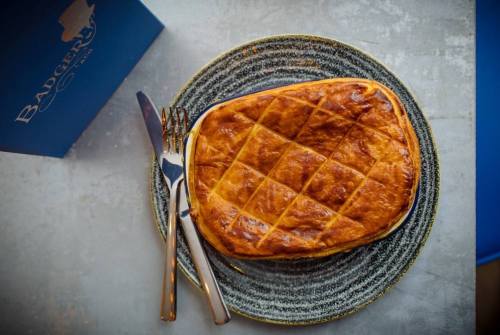 Comforting game pies are on offer at Badger & Co

With its thin layer of  Crispy Feuille De Brick pastry , the home-made filling of braised chicken and leeks in a creamy tarragon sauce had been made by a talented chef, using the right balance of seasoning. Paired with both the tripple cooked beef dripping chips and a portion of hand cut chips, it was the ultimate comfort food on a cold April afternoon.

The drinks menu is impressive with delicious cocktails crafted by experienced mixologists with names paying homage to the novel like Willow Wren, Badger’s Burrow and It Snows in April, which it certainly did on the launch night!

There’s a fabulous offering of draught and bottled beers including Caledonian Rare Red Rye, Vedett Extra Blond and Singha and a good wine list too.

They also have a private dining room downstairs, which seats 12. With  its own bar, it’s the ultimate adults playground, with a table that converts from a dining  to ping-pong and even a pool table. Equipped with a screen, it would serve well as a  venue for an intimate corporate drinks or up-market dining event. I almost hate sharing this – as it’s a hidden gem.

There’s never a wrong time to check into Badger & Co. Open from breakfast to late at night (8am-1am daily), this fab’, new bar is set to be my favorite new destination for meeting friends.

“They had felt hungry before, but when they actually saw at last the supper that was spread for them, really it seemed only a question of what they should attack first where all was so attractive, and whether the other things would obligingly wait for them till they had time to give them attention.” Kenneth Grahame, Wind in the Willows