Those of you who know me, will know I have something of an obsession for France. So you might quite rightly think the most evocative thing for me would be a great meal, the landscape, the wine, the bread.

I have to confess that it is actually …. Orangina! This is someone who rarely drinks fizzy soft drinks too. 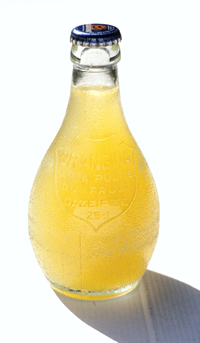 I have been to France more times than I can count. At a very early age, I can remember drinking Orangina from thick, slightly scratched bottles (which were in fact recycled and refilled). There was something  just that bit magical when you shook the bottle to mix it rather like shaking a  snow globe perhaps. I just love the slightly sparkling taste of orange (with a hint of lemon, grapefruit and mandarin).

I was somewhat of a surprise to learn that the Orangina was created 75 years ago  and it is not exactly French.

It came about due to the meeting in 1935 at a fair in Marseille of Dr Trigo Miralles from Spain and Leon Beton. Dr Miralles had invented a process to conserve orange juice by adding carbonised water. This was “matured” in a round bottle shaped a little like an orange with rough sides topped with a special stopper.  He called his invention Orangina, Naranjina soda (Naranjina means small orange in Spansih). Leon Beton took the formula back to Boufarik in Algeria with the intention of  promoting the drink. 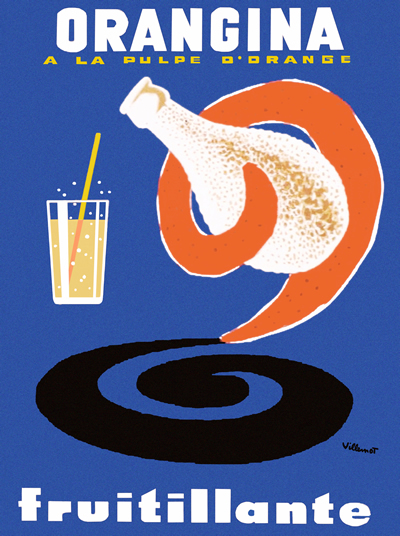 In 1947, Jean-Claude Beton relauched the product which met with disapproval from cafe owners as it wasn’t a conventional shape and took up too much space.  Jean-Claude insisted he wouldn’t change a thing. By 1953, it was drunk on the Champs Elysees and by 10 years later it was one of the most popular drinks in France. It wasn’t until 1961 that Orangina moved its headquarters in Algeria to France. It’s also had many firsts. The first carbonated drink to be put into a can in France in 1977; the first “light” drink created in 1988. Now,

Orangina has always had a talent for publicity. From the now iconic posters many created by Bernard Villemot, to some edgy television adverts today and too celebrate its golden jubilee a 23 metre high version of the famous bulby bottle was created weighing 65 tons. If you’ve a minute, you’ve just got to check out some on YouTube – what can I say but very French.

Bottom line, for me Orangina was and still is the perfect drink when it is very hot and sunny. 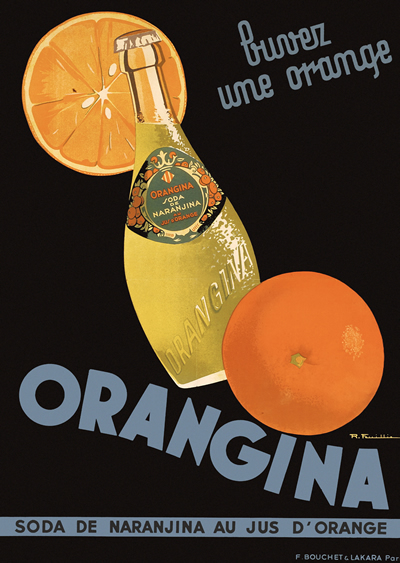 Orangina a perfect cocktail mixer so why not whip up a refreshing cocktail ?

Thanks to Jean Watin-Augouard for his history of Orangina (in French).
Photographs,  illustrations and cocktails are courtesy of Orangina. 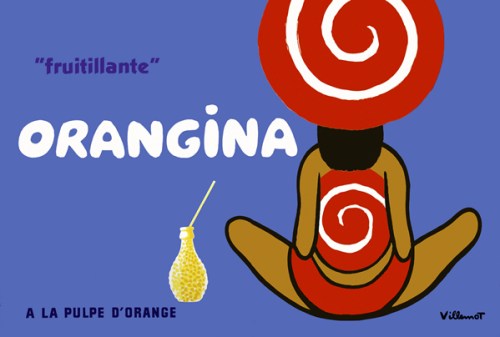