I am already won over when I walk in to the restaurant out of the freezing air into a gloriously warm space. I later find that the temperature is set to Australian temperature, co-owner Georgie Binder’s native country.

Blackfriars Bar and Restaurant is located just off the Royal Mile in the premises that used to be Black Bo’s, an Edinburgh institution for more than 20 years. It’s a curious set up as the bar is at no 57, and the restaurant at 61. There are two separate entrances and two separate rooms, linked by a basement corridor and kitchen. 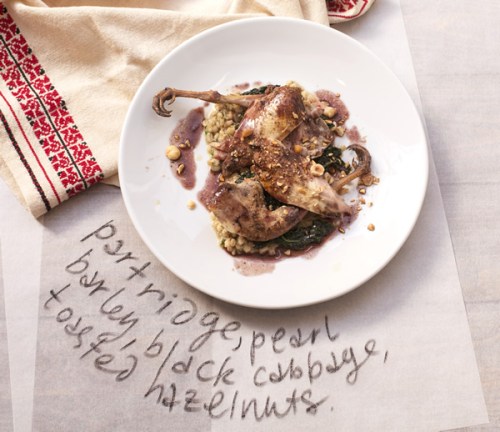 Andrew Macdonald, co-owner and head chef spent many a long evening in Black Bo’s when attending Edinburgh College of Art and always had a soft spot for it. Now Georgie and Andrew having gained experience together in restaurants as far away as Melbourne and as local as Martin Wishart are bringing their passion for local ingredients to their growing fan base. Andrew tells me of his satisfaction at breaking the meat down from a carcass and sourcing local ingredients. I remember back to that extraordinary performance of One Pig, when he provided some of the wonderful dishes on sale after the performance. 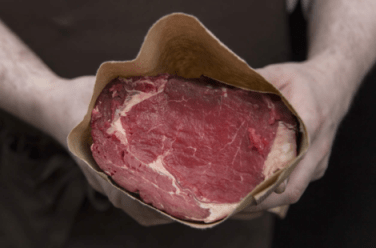 There are plenty of interesting drinks to choose from and beers in particular. I wish I’d been at the beer and food dinner featuring beers from the Wild Beer Company held recently – can you imagine Roe deer loin, salted bakes roots, onions and greens paired with a beer named Modus Operandi made with wild yeast and oak aged?

In the bar, small dishes are served – pink fir apple potatoes served with their own chorizo sounds so good. Mr EF and I are dining in the restaurant.

It was one of those menus that was difficult to choose from. We liked the sound of everything. I’ve probably said this before, but Mr EF very rarely orders steak as he so often finds it a disappointment. He feels he’s in good hands here and asks for the Rump Steak with Béarnaise Sauce and is bowled over by the flavour and quality of the meat. It’s cooked medium rare as requested and is juicy and delicious. 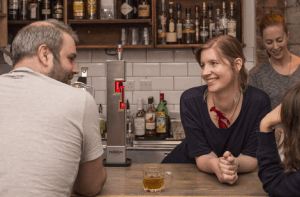 Andrew and Georgie in their restaurant

I plump for pheasant served with pearl barley. Seeing the size of the portion, I rather wished I had not tucked into my game terrine starter with so much gusto. (But I wouldn’t have missed that either).

It was the whole bird roasted and served on a bed of pearl barley and hazelnuts – perfect comfort food. Simple hearty flavours perfectly cooked and moist. Mr EF had declared his starter of grilled radicchio, beetroot and blood orange beautifully fresh.

There’s three desserts to choose from and they perhaps do not reflect local produce to quite the same extent as the starters and mains. I tried the Frangelico affogato and Mr EF quince and pear tart with honey granita. Both were lovely and we both loved the taster of some wonderfully spicy ice cream.

Blackfriars is the sort of place you’d love to call your local: A friendly welcome with delicious food cooked with passion with something nice to sup on the side. 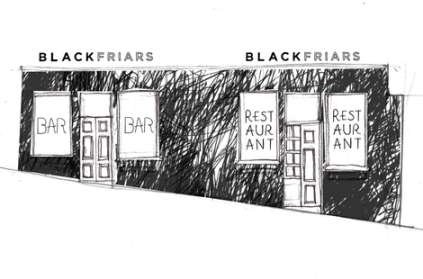