A feast of foraging

John and Miles are at Edinburgh Science Festival on March 31, 2013

How many of us actually eat wild plants these days? Picking blackberries, elderflowers and  elderberries, sloes and wild garlic are all popular finds for me. Much as we like the idea of mushroom picking, that’s fraught with problems. So where to start? 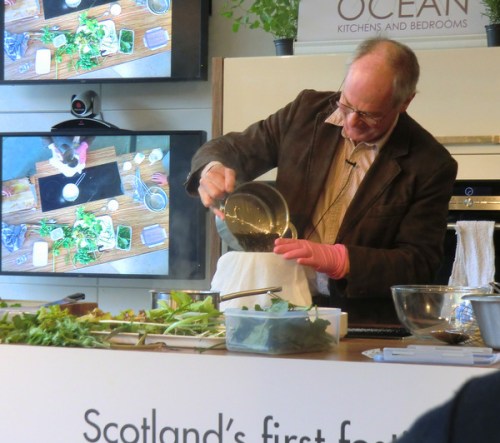 My personal highlights of Edinburgh’s first food and science festival, Science on a Plate was the chance to go foraging with John Wright (of River Cottage) and Miles Irving well known forager, and to hear Rene Redzepi‘s thoughts on wild food. 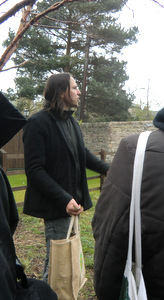 We were split into two large groups one with John, one with Miles to explore edible opportunities throughout the Royal Botanic Garden Edinburgh accompanied by a botanist. The Botanics are perhaps not the obvious place to forage as it is so meticulously looked after, but each group came up with more than 30 different food suggestions (including I have to report, ducks and squirrels!).

Miles easily convinced me that with a little research there is so much more to discover! One tip is to find out what family the plant comes from, it usually gives some indication of whether it will be edible!

It was fascinating to find many of the weeds I continually reject from the garden such as chickweed are edible and to discover that wild sorrel is far more tasty than the cultivated sort. We were encouraged to munch cherry blossom (they have a distinct almondy taste). I subsequently found out that the blossoms are made into ice cream in Japan. 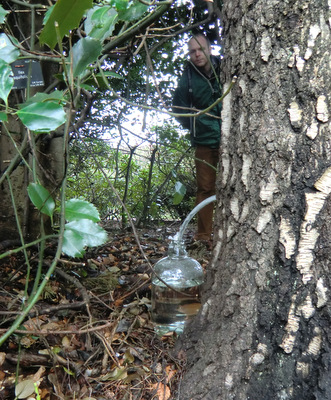 Collection of birch sap in the Botanics

The green shoots of a juniper bush were a revelation. Other plants tasted particularly spicy, like cloves for example even if they have nothing in common with the spice itself. Towards the end of the foraging session we were led through bushes to a large silver birch tree. It was being tapped for its sap. You can only do this when the sap is rising, for a few weeks a year. Amazingly the sap you can see in the jar was collected in 24 hours!

Nicely chilled, we set off back to the John Hope Gateway restaurant. John and Miles had foraged some items the day before and added to a few other local ingredients we had a breakfast fit for royalty. Delicious. Favourites were the eggs baked wild garlic and morel and the apple and sea buckthorn juice. 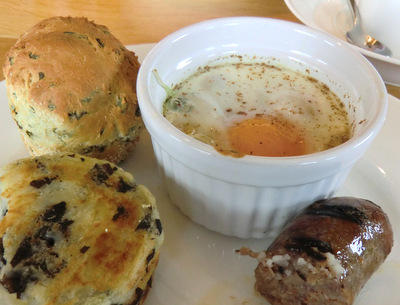 Later that day, we discovered all things seaweed with John. It’s good to know that there are no inedible seaweeds, but you have to be careful of water purity.

Now so many of us eat sushi, we’re more familiar with it, but few of us use it at home. It’s not just for savoury dishes, John used carageenan to set some panacotta in minutes! Commonly known as E407 this seaweed used in many different items including toothpaste! There was no lingering aftertaste of seaweed in the dessert.

To round off the perfect foraging day, we dialled in to Rene Redzepi’s kitchen at Noma, Denmark via Skype to find out what he’s currently foraging. 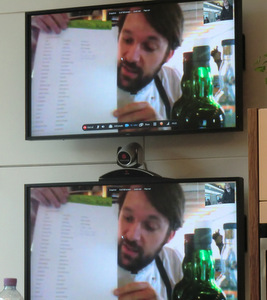 He’s currently using a lot of wild garlic; ground elder with steamed turbot; nettle tips that have an almost cucumber-like taste, purslane, wild parsley root and yellow star of Bethlehem. He too uses the birch sap – it is served as an alternative to water in the restaurant or made into a beer. Lichen needs to have special treatment before it can be eaten – it’s washed in ash and water. In the picture below, he is sharing with us his list 51 different pickles they make including one made with gooseberries that is lightly fermented. He has an astonishing 1,500 kg of food in storage at any one time. It was amusing to note he was absent mindedly nibbling some his ingredients throughout the chat.

Well done the team behind the first Food and Science Festival. I do hope a second is in the offing for next year!

John and Miles recommended the following books. If you’re particularly serious, they suggest going for the Vegetative Key.