There are about a dozen of us sat round a table upstairs in Iglu restaurant, Edinburgh. We’re there in part because Ben Reade worked at the restaurant some 7 years ago and partly as he’s now Head of Culinary Research and Development at the Nordic Food Lab based in Copenhagen, Denmark. It was set up by Noma chef, Rene Redzepi and Claus Meyer in 2008 to:

“explore the building blocks of Nordic cuisine through traditional and modern gastronomies, and to share these results with chefs, academics, industry, and the public”. 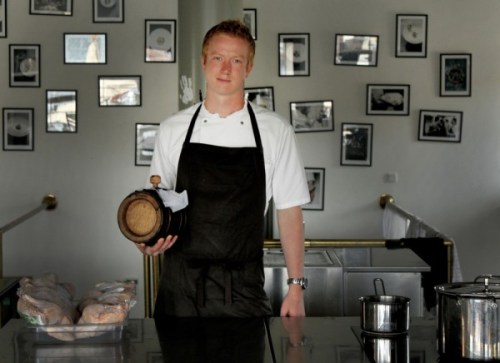 Having thoroughly enjoyed the foraging morning organised at the Botanics early in 2012 and hearing Rene explain via Skype about how he uses foraged food, we were keen to hear more.

Ben explains that we are very Mediterranean-oriented in our tastes in Britain, when we could be looking towards Scandinavia. Copenhagen is just a little further south than Edinburgh and we have much in common. We’ve got so many ingredients we could use. In some cases we’ve simply forgotten how.

Ben has brought us a selection of foods to taste – items that were portable and could be easily packed. What followed was simply astonishing. 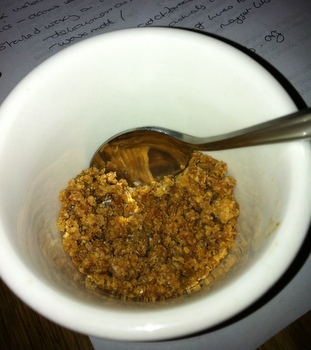 Seaweed is not too unfamiliar to many of us. However, the dulce we tasted had been aged 2 years. After this time salt crystals form and the flavour intensifies. It’s chewy and not unexpectedly, tastes of the sea.  We were surprised to learn that experiments turning it into ice cream had been pronounced as delicious by all who tried it. “Ideal way to get children to eat something good for them”. Ben quips.

We’re warned to take a very small pinch of the next item. It’s brown and crumbly. We gingerly place a small amount on our tongues. The flavour explodes. Looking round there’s a surprised look on everyone’s face. This is konbu. Japanese dashi is made from konbu or kelp that been slow cooked, then dried. It’s got a similar sort of flavour as Marmite, just more intense. You can imagine a tiny amount enhancing any dish. 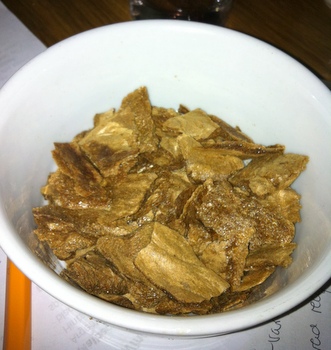 Here we have a short discussion on umami erroneously called the fifth taste, it is rather “the sensation of deliciousness”.

Our next food is dark brown, thinnish irregular slices. This is freeze dried beef stock. It’s not something you could easily make at home, Ben gets a friendly professor at the local university to dry it for him in his very expensive, very large freeze dry machine. It’s rich and round and flavoursome – who needs savoury crisps when you can savour just one slice of the stock.

We then taste samphire powder which is a very bright green. It has all the taste of the plant we eat frequently with fish and could be used as savoury flavouring . However, a major use for this plant is biofuel, what a waste.

Many cultures have fermented sauces that feature in their cuisine, such as nuoc cham in Vietnam or soy sauce. Many are fish based, others plant based. Possibly my favourite taste of the evening was a soy-like sauce made with yellow peas and barley inoculated with mould (see the picture above) then fermented for a month. The resulting sauce is light in colour and has far less salt than standard soy (about  a fifth). 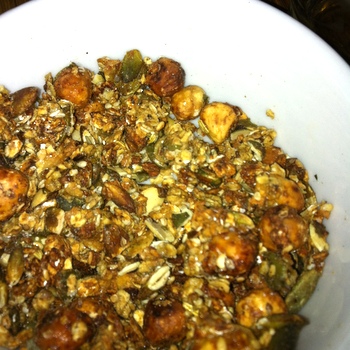 So that then led us to insects. In Europe, we rarely have enough of any type of insect to make it a food staple. However, some beekeepers are removing drone brood to lessen the effect of the varroa virus. Can you see where this is going? Drone brood look rather like maggots, but these insect have only fed on honey their entire lives. Which leads us to our last taste, bee larvae granola. It tastes and looks like any good granola – you’d not be able to identify any specific ingredients. It’s a fiddly process extracting the larvae but they’ve just discovered that dipping in liquid nitrogen does the trick.

Could some or all of these foods become common place? I do hope so. The research carried out by the Nordic Food Lab can be accessed free of charge and chefs can access recipes. I for one am very keen to try the “mouldy barley” sauce.

Seaweeds for umami flavour in the New Nordic Cuisine 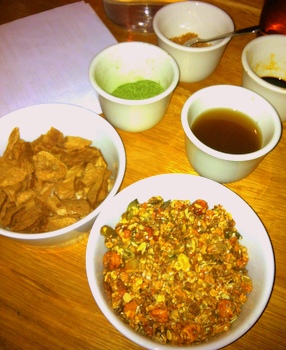