Ginger Snap pop-up restaurant: a glimpse of something different

Last year, pop-ups – temporary shops and restaurants – grew in popularity. I visited two pop-up restaurants – The Gardeners’ Cottage in the summer and Ginger Snap just before Christmas. Pop-up restaurants are great for showing off a chef’s skills while they wait for a kitchen, or get them seen by a new audience. Pop-ups are great for marketing and they offer an interesting, new eating experience. The very fact that they are temporary, intransigent, is part of their attraction. Of course, the food still has to be good. 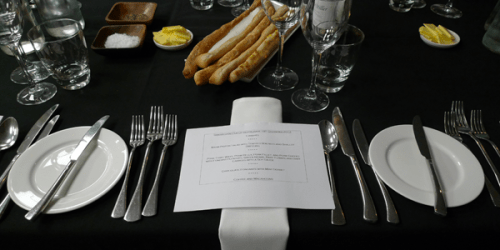 An attractive place setting and a promising menu at Ginger Snap’s pop-up restaurant in Leith.

When the foods good – and both of my experiences were great – pop-up restaurants are fun and different. I’d recommend that you bring a friend, though.

December in Edinburgh is dark, windy and frequently wet. I got on a bus in gloomy Gorgie to go right across town and down to Leith, were Ginger Snap – Tania Dixon – uses her commercial kitchen as the venue for a pop-up restaurant. 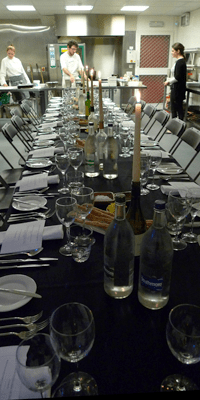 Ready for service: Tania and her staff are preparing the last touches before the diners arrive.

The unit’s one of several on a lane of industrial units. The door is unassuming and despite the clear Ginger Snap sign it took me a couple of seconds to decide to knock. It doesn’t look like a restaurant because it isn’t. I was let in an made comfortable and had time to have a good look at the kitchen, the table and the menu. It all looked good. I wished EF was with me so she could have a look at the sous vide and compare it to the one at home. I was genuinely excited about getting a good look at a commercial kitchen. The space is reorganised to leave the cooking area near the back, where the ovens are, and clear the floor to create an open area where the dining table goes. The table, swathed in crisp black table cloths with bright white napkins and shining silver cuttlery was a calm island in an busy industrial sea. I liked the look of it.

I was early to have a brief chat with Tania whose main work is catering. About once a month she opens her kitchen and turns it into a restaurant. It is a fun night for her guests but also for her. As a caterer, she’s often hidden away in a kitchen, doing a lot of the work out of sight. This way, she gets to see her guests’ reactions to the food that she serves: immediate feedback. 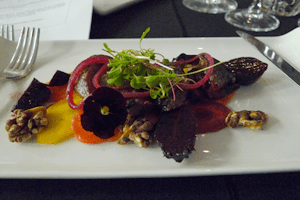 The reaction to the starters must have been satisfying for her. A warm salad of pigeon on pickled carrots with toasted walnuts and a shallot dressing. The pigeon was perfect and went well with the crunchy walnuts. The carrots were crunchy and although a little sharp – I’m not big on vinegar – they worked with the rich meat.

Ginger Snap’s pop-up restaurant is BYOB which means that you can match something to the menu without breaking the bank. Since I was going on my own, I didn’t bring anything but stuck to water. Not a bad thing in December, really.

I’m not shy about doing things on my own, usually. I’m happy going to the cinema on my own and have had many meals out on my own. Both the pop-ups I’ve visited, however, have had long tables and sitting in the middle of one of them on your tod feels a little sad. At Ginger Snap I was paired with a journalist from Edinburgh Life magazine which I was grateful for since we had groups of good friends in high spirits on either side. Butting in would have felt rude. We had a great chat and a very nice evening. 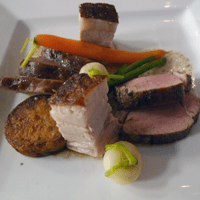 We both enjoyed our main tremendously. “Pork three ways” offered pork fillet cooked sous vide and slow cooked pork cheeks and belly. The fillet was infused with the delicate flavour of star anise, the belly meltingly soft and the cheek savoury and moreish. The pork was accompanied by fondant potatoes and baby turnips but the meat ruled the plate. It was lovely dish, one I’d happily eat again.

If you follow this blog, you’ll know that when I don’t have the cheese, I have something creamy, often créme brulée. With a set menu, I didn’t have a choice so I had something I wouldn’t usually chose: a chocolate fondant with mint sorbet. The fondant was rich and gooey; the sorbet was cool, crisp, and clean. I had worried that it would be too minty, flipping over into toothpaste, but it was just right. 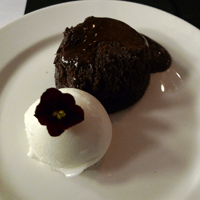 Mint sorbet: I’d like a tub of that in my freezer.

We finished with teas and macaroons from the Manna House. ‘Twas the season and smoked pine is a hugely seasonal and totally genius macaroon flavour. I took the evocative flavour of pine, knitted it together with the flavour of anise infused pork and wrapped my self in the feeling of comfort that engendered before braving the night again. It was cold out there, outside the warm kitchen, and the wind was up again. I’d had a great meal in interesting surroundings and would recommend it to anyone looking for a new experience.

Rustle up your friends, find a favourite bottle and book your seat.

The next pop-up dinner is January 17th. Keep an eye on Ginger Snap’s Facebook page, or follow her on Twitter, to find out when the February menu is released.