Wee Restaurant: a small restaurant with a big heart

What’s special about your favourite restaurant? The food and service are very important of course, but if you’re lucky it is also that special welcome you get if you’re a regular diner. Perhaps it’s not so easy in a big city, but just 15 minutes away from Edinburgh city centre, you can find just such a welcome at the Wee Restaurant in North Queenferry.

Nearly five years ago, and just two weeks after their first child was born, Vikki and Craig opened the restaurant. On that first day, they were hoping that it would be fairly quiet, but the locals had other ideas, they turned up to support the restaurant and have done so ever since.

Dishes from the Wee Restaurant menu

Since that day, the Wee Restaurant has a very loyal following -diners are known by name as are their favourite dishes. It’s proved a popular destination from diners in Fife and beyond attracted by how easy it is to reach by train. One diner confessed that the first time they visited they hadn’t travelled on a train for 20 years. It’s such a practical way to dine -no need to forego a drink!

Serving up to 40 people, the restaurant is indeed wee. The kitchen is just as compact. Craig’s time on the Royal Scotsman train definitely comes into play here, it is beautifully laid out with everything within reach and somehow seems larger than it is.  When I visited, Craig was busy making duck rillettes after cooking the meat for many hours and letting that night’s bread prove.

Everything is, of course, made from scratch. Craig has a passion for cooking “long and slow” reflected in two of the dishes I tasted. You can tell his classical training shines through with modern adaptations. The calf’s tongue (a first for me, almost like a duck confit in texture) rich and tasty and a slow roast collar of pork that just melted in the mouth. Craig creates a new menu every two weeks and rather than create fancy dishes, lets the quality of the ingredients speak for themselves. He’s a dab hand a pastry too – the pineapple tart tatin was fabulous.

Craig explains that Nick Ryan instilled in him to “respect your ingredients” when he worked for him as Head Chef at the Crinan Hotel. “He’s a wonderful man, and has been very generous with his advice over the years”. He also counts Martin Wishart as a mentor, who he also worked for. Martin provided Craig and Vikki valuable advice when setting up the restaurant. 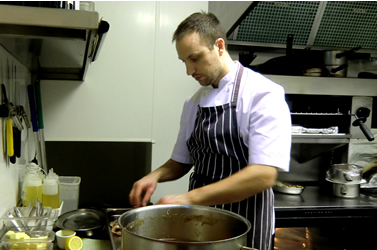 Craig Wood at the Wee Restaurant

Craig works very closely with his suppliers to ensure he has the best, most seasonal produce. Rather than buy large quantities, he buys small quantities, frequently and has a number of trusted suppliers he works closely with. He comments “Scotland undersells itself, we have the finest produce anywhere. People say they’ll not eat steak anywhere but here – we pride ourselves on sourcing the very best”.

Do pop over the water to try the wee restaurant, you’ll be very welcome. Craig and Vikki often hosts special wine dinners. Check the website for more information.