Zizzi Edinburgh opens with a sizzle

To get to the first Zizzi to open in Edinburgh in seven years, you have two choices. If you’re working up an appetite you can walk up from Cockburn Street or indeed if you want to keep fit. The easiest option is from the Royal Mile, look out for the entrance to Mary Kings’ Close, walk down the passage as if you were going into the attraction, turn left and you’re there. 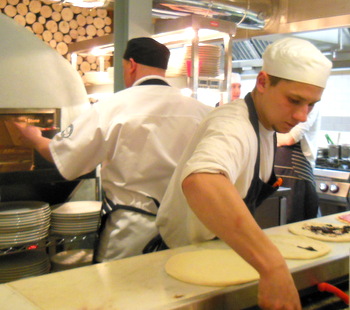 We went along to the launch evening, and were enchanted to be met by some of the residents of Mary Kings’ Close dressed in their finery for the occasion. Now, I can’t promise that sort of welcome each time you visit, but you’ll instantly feel at home. You walk into an L-shaped space. Before you is a fabulous view down over Princes Street and beyond.

I am instantly drawn to the left of the room where, in an open kitchen the team are preparing pizzas to bake in the roaring oven behind them. Starters are being prepared to the other side. It’s a hive of activity. Later when I talk to Steve, the manager, I discover that he had the pick of staff from other Zizzi’s and has brought the best to lead his team. He did have to find other staff to replace them mind you!

Much as the pizzas looked delicious, I was keen to try one of the other dishes and was tempted by the Zizzi fish stew. A rather nice touch, the menu indicates dishes that contain 600 calories for those wanting to go for a lighter version and incredibly this dish is one of them. To start with with have a platter which showcases some of the dishes from the menu. 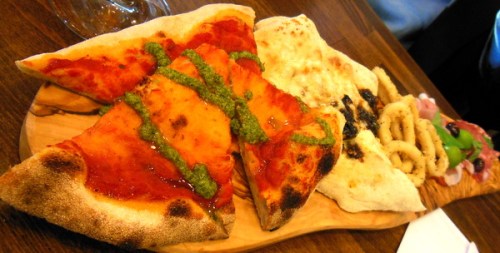 A selection of starters

The calamari (from the sharing menu) and the garlic bread with mozzarella and tomato and pesto bread from the “dishes to start”. The calamari are among the best I’ve ever tasted. Both the breads are delicious and the way I like them, crisp and not too much topping. Mr EF waxes lyrical about his insalata di pollo (chicken salad) which is again one of the 600 calorie dishes and includes chicken, pancetta, green beans, cannellini, onions, tomatoes and lentils in a aioli and lemon dressing. It’s moist and has just the right amount of dressing. 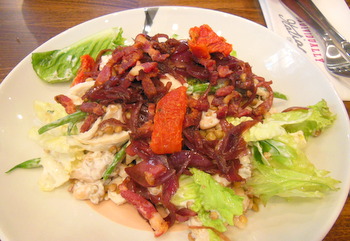 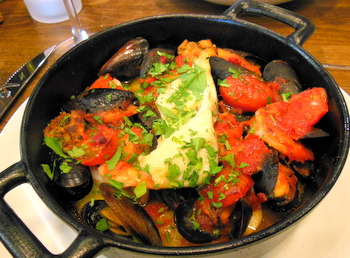 My fish stew is chock full of fish and seafood in a deeply flavoured tomato sauce with sliced potato – each element cooked perfectly. Portions are generous!

We get to share 3 desserts between us: lemon tart, tiramisu and chocolate tart. It was difficult to chose our favourites as all were a very fitting end to a lovely meal. Just to mention, the drinks list is extensive and reasonably priced and don’t miss the chance to try the limoncello!

We continued to enjoy the atmosphere throughout our meal and the excellent service. Prices are reasonable – do go and give it a try especially if Italian restaurants are not your first choice. It’s really special.