We left Edinburgh on a Friday afternoon and promptly got stuck trying to get over the Forth Road Bridge. Our sat nav seemed desperate to send us via the Erskine Bridge. We stuck to our guns. It was actually a good journey and we arrived at the Craigellachie Hotel without any further incidents. The weather on the way up was lovely. Would the weekend prove to be as glorious? 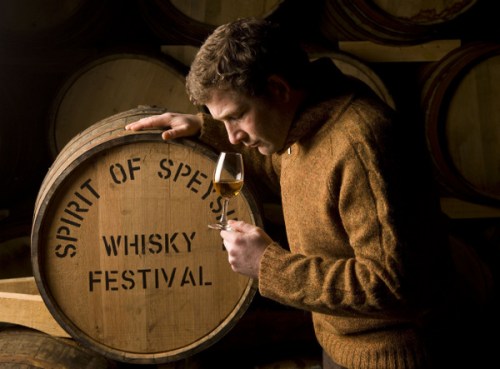 A whisky festival is such a great way to discover Scotland. With over 300 events to choose from, it is suffice to say you’re spoilt for choice at the Spirit of Speyside. We were keen to try a wide range of activities. We could have taken the whisky bus that wends its way from one distillery to another or hop on and off the No. 36 which runs all year. But with limited time, we handpicked some rather lovely events.

The Birth of a Distillery 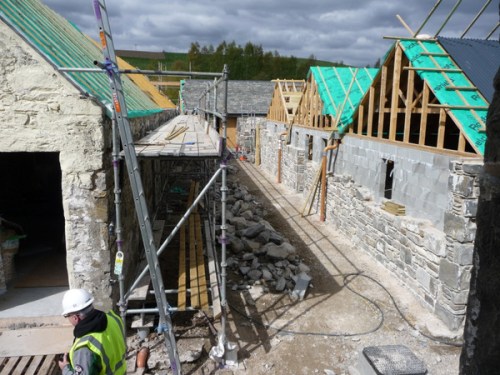 Ballindalloch is one of the most lovely castles in Scotland. It has been lived in continuously by its original family,  the Macpherson-Grants since 1546. The castle sits at the heart of the Estate where the family now combine both traditional Highland activities and contemporary business enterprises. Now the family are creating on a fascinating adventure, creating a single estate distillery. 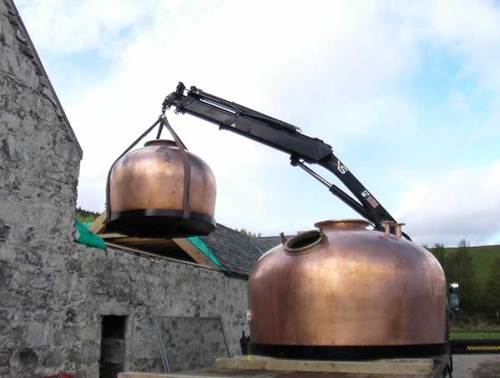 Placing the pot in the still. 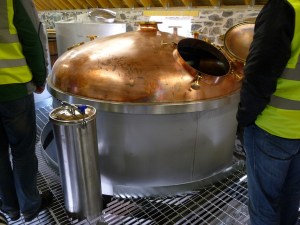 We’d noticed some renovations taking place close to the Ballindalloch golf club on our way past, not realising that this was its location. Distillery Host Brian Robinson, just 5 days into his new job, was on hand to show us round. We donned hard hats and set off through the buildings being renovated. 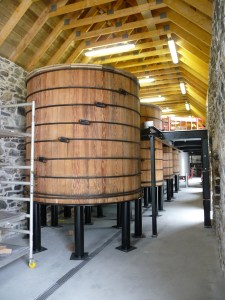 The air of anticipation is palpable. Brian describes how quickly things are progressing, some of the equipment is now in, and the all important stills are due a few days later. There’s a hole left in a roof so that they can be winched in. We were in the company of employees from other distilleries and they kept marvelling at the scale – the distillery anticipated making 100,000 litres each year on a completely different scale to the big guns.

The family were previously involved with the Cragganmore distillery, and over samples from two private casks of 27 and 29 years old, we discovered how the distillery will draw as much from the estate itself (hence single estate whisky) starting with growing the barley and that they are seeking to create a whisky with similar characteristics as Mortlach. All very exciting stuff – and the malts were beautiful. Distilling will start in July 2014.

Test of the Senses with the Whisky Belle

May 3, 2014 was declared the first International Women of Whisky Day. To celebrate, four wonderful women of whisky ran an event at the Aberlour Hotel. Johanne McInnis, a Canadian whisky writer and judge known as Whisky Lassie; Alwynne known as Miss Whisky; Annabel Meikle known as the Whisky Belle and Angela D’Orazio master blender from Mackmyra Distillery in Sweden joined forces to present a fascinating programme.

After a leisurely walk from the hotel along part of the Speyside way in the gloriously warm sunny weather, we joined Annabel Meikle for “Test of the Senses” one of the Women of Whisky events. During a very entertaining interactive session, we tried to identify different flavours within 6 whiskies – with plenty of foods on hand to help – chocolate, apples, apricots, spices, tablet. The participants from Italy, Norway, Denmark, Germany, Scotland and England got stuck in and came up with some fascinating descriptions. We dipped back into childhood memories to identify comforting smells like vanilla and not so pleasant, damp and moss.

The visitors to the festival come from all over the World. Much of the time, there were far more foreign visitors than ones from these shores! All were very knowledgeable and many visit year after year. A group of Norweigans chartered a bus to transport them round for the festival. We met a German man who was logging all the drams he’d tasted over the 5 years he’d visited and Danish ladies with a penchant for the peatiest whiskies available and then a delightful German couple on their first visit. Some Italians proved particularly adept at Annabel’s tasting. Scotland and whisky clearly have a high standing abroad! 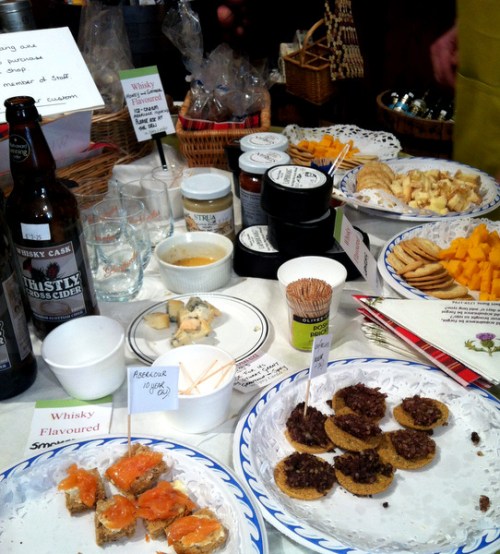 A cornucopia of whisky infused foods at the Spey Larder

What glorious tastes we found! Speyside Larder had a table groaning with local whisky flavoured products. We savoured their own recipe haggis with Glenfarclas; venison paté with whisky and several different cheeses. On the sweet side, there was whisky cake, whisky flavoured honey and shortbread. We just had to return later in the day to try their whisky ice cream which featured toasted oats and plenty of cream. Luckily all these products are available year round, not just during the festival.

That evening, we had a little time before our meal to follow the path up to the Aberlour Falls discovering some macrophotography with a whisky theme on panels along the way.The tree trunks are black close to the distillery, covered with “the angels share” fungus. 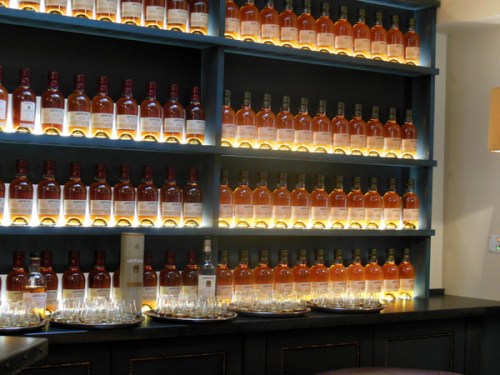 A fine selection of Aberlour Whiskies

The Fleming Rooms at the Aberlour Distillery are beautiful. There are some lovely touches, lighting created from wine glasses and bottles and a fabulous table. Guests made themselves comfortable throughout the suite of rooms and sampled 5 different malts carefully matched with food which Ann Miller, Brand Ambassador described. I was particularly pleased to come across Aberlour a’bunadh Batch 46 for the second time that day. We’d discovered it at Annabel’s tasting and it had swiftly become a favourite. Here this was teamed with a platter that included mini Yorkshire puddings, pigeon burgers and mini beer Wellington. If pushed, I’d have to say that my favourite platter had to be the desserts: macarons, praline, creme brulee and tarte tatin teamed with Aberlour 18 year old. 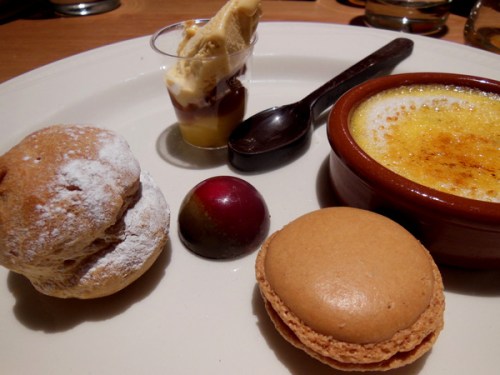 After our supper, we caught the second half of a concert featuring Charlie McKerron and his all star band’s: Tim Edey (currently on tour with the Chieftans) and Ross Ainslie  (Salsa Celtica, Treacherous Orchester, India Alba). A lively and fitting end to our day 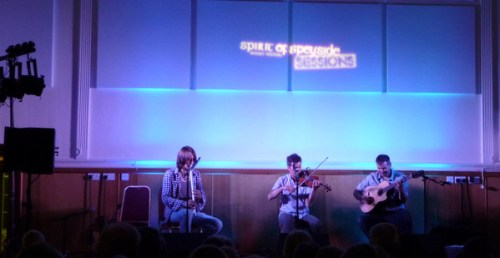 Spirit of Speywide Sessions Concert with Charile McKerron and his band

Before we headed home, we took the train from Dufftown to Keith. No ordinary train, this is run by an enthusiastic team of volunteers. We met the wonderful Sybil Stuart who runs the Buffer Stop Cafe. I ate one of the best scones I’ve ever tasted before we boarded the train. 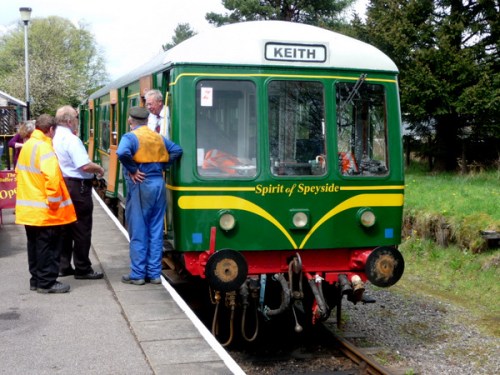 All aboard! Keith and Dufftown Railway

It’s a leisurely 11 mile trip between the two towns through the Speyside countryside, and as it was whisky festival time, we enjoyed a dram and whisky cake! Alas on the return visit, the train broke down. The first time in 14 years! All credit to the volunteers who managed to replace a part and get us going again within 30 minutes. And out came another dram to compensate the passengers. We ate sandwiches in the Buffer Stop on our return. The trip was a very fitting end to a wonderful festival visit. 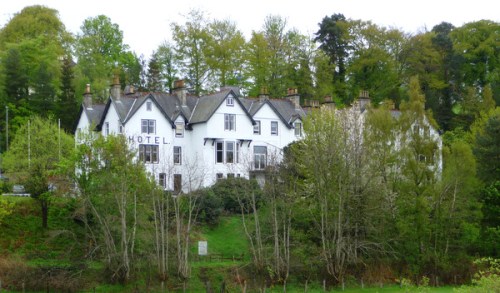 The Craigellachie Hotel had re-opened just the day before after thorough refurbishment. We found understated decoration, whites and beiges. Our room was large and airy. A lovely touch was the items on the tea tray: fresh coffee and cafetiere and local tablet (fudge). The staff were very friendly and made us welcome. The laid back bar and restaurant served a menu that is varied, focusing on local ingredients and including some interesting dishes for vegetarians. There are a few things that need ironing out, but it’s early days. The Hotel already has a lovely feel, it will get better and better.

The Spirit of Speyside takes place each May. However, there are whisky festivals all over Scotland throughout the year! You can also experience many wonderful events outside the Festival. For example there is a VIP tour at Aberlour which can include filling your own bottle of whisky. There will be further private tours of the Ballindalloch Distillery – please contact the Distillery for more information. The Railway is open year round for trips on most Fridays, Saturdays and Sundays. Annabel Meikle will be holding sessions during the Edinburgh Fringe Festival in August 2014.

Thank you to Visit Scotland and the Spirit of Speyside for a wonderful visit. We’ll be back! 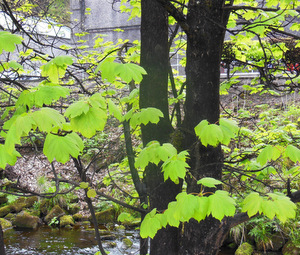 Aberlour Distillery Visitor Centre
Craigellachie Hotel – The Quaich Bar and Restaurant are open to all.
Keith and Dufftown Railway
Speyside Larder
Spirit of Speyside Festival – 30th April to 4 May 2015
Whisky Belle Tastings
Whisky Events during Whisky Month May 2013 and throughout the year

Food and Drink in Scotland