Beer 52: A refreshing taste of Summer 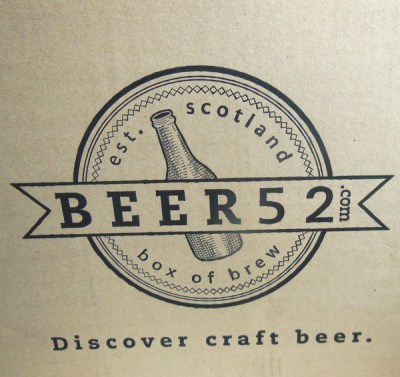 Would we like to try a box of beer? Yes please!

A great part of going to a beer festival is discovering all the brews. But how many times a year do we get to go to one? The’re a great alternative. Beer 52 is a craft beer club. Experts select 8 small batch beers for you to taste and it is sent to your home on a monthly basis.

Read on to find out about a special offer for Edinburgh Foody readers.

The box arrived. It was very well packed so that there was no likelihood of the bottles getting damaged. (Delivery is free by the way, which we heartily applaud). Inside is a copy of Ferment magazine which contains an entertaining number of articles – all on beer of course. If you like a good drop of beer this is an enjoyable read, definitely not  too geeky.

So to the beers. Mr EF tasted the Summer beer selection. He opened them in no particular order over a few weeks and shares his thoughts with you. Seven of the beers were from Britain, with one from the Netherlands.

Cheddar Ales: When carefully pouring the 500ml bottle into a pint (568ml) glass, as instructed on the label, there was so much gas release that the (creamy) head was about an inch thick, resulting in not enough room in the glass. I have never seen such activity in the glass from a beer! Quite well hopped with a clean and quite bitter taste, leaving a vague hint of orange as an after-taste. Very Good.

Sunburst: 4.8% alc. Straw gold in colour. A lovely clean light lager. Some lagers don’t taste very nice when a bit warm, but this one didn’t need the chill to mask any nastiness. Paired well with fish and a Thai coconut sauce.

London Fields Brewery, 3 Weiss Monkeys: 5.5%. A part wheat beer so a bit cloudy (which seems wrong to me!). Very creamy, with apple/banana and citrus notes.

London Fields Hackney Hopster 4.2%: Amber coloured, with active yeast in the bottle, so needs to be stored, and poured carefully. Quite dry, and lightly hopped.

The full Nelson 4.8%: Another ‘volcano’ beer. Spewed out of the bottle as soon as the top was partially off. Lost quite a bit on the floor before I got to the sink. After I got it in the glass, the bubble eruption continued and put a 5 cm head on it. Not particularly bitter and a very pleasant flavour billed as ‘grape’.

Ticketybrew Rose wheat beer 4.7%: Lively in the glass. A straw coloured beer, possibly with a slight green tinge. Tastes slightly of grapefruit and/or ginger, with the tickle on the tongue that you get from raw ginger. A nice light and refreshing beer.

Amerikaans 4.5%: Yet another ‘volcano’ beer, although only once it was in the glass. Had equal measure of head and beer to start with, so had to let it subside a bit to get the rest of the beer in the glass. Quite bitter, but without extreme hoppiness.

Theme: All the beers were definitely right for summer.

Price: Reasonably priced at £28 including delivery. Great to have all the selection is done for you. You can then go to the suppliers to buy your favourites direct – all the website addresses are provided.

Edinburgh Foody readers can get a case at £10 discount with code FOODY. Sign up now.

Enjoyability: A great way to try beers other people have suggested and might not have otherwise come across. 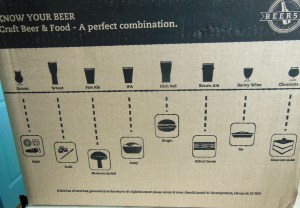 Fraser Doherty started the business with my co-founder James Brown last year after he went on a motorcycle ‘craft beer road trip’ around Europe. He discovered there were more than 12,000 microbreweries in the world, producing all kinds of amazing beers. After that trip, they put together a team of craft beer experts who now handpick eight different beers each month for our members to try. We’re sourcing exclusive, small batch beers from the best tiny and experimental breweries around the world.