I am a huge fan of Fentiman’s beverages. At the Speciality Food Show in Glasgow recently, I was very excited to see two new bottles on the Fentiman’s stand their new tonic (better than any other I have tasted) and Ginger Beer marketed under the name of John Hollows. Due to licencing laws, I was unable to sample the Ginger Beer at the show. But Andrew at  Vino Wines came to the rescue. I popped into their rather classy store in Morningside to pick up a bottle. 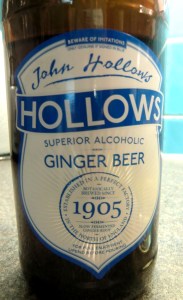 For those of you familiar with their beverages, many have quite a kick to them. I was expecting the same with the Hollows. However, it is altogether more subtle, very light, quite bubbly with a wonderful gingery taste.

Fentimans explain  “Unlike other so-called ginger beers, ours is the real thing. Using only the finest Chinese ginger root we botanically brew Hollows Superior Alcoholic Ginger Beer. There’s no wine, nuts, hops, malts or any other artificial nonsense. That’s why we call it a Superior Ginger Beer”.

Definitely one to go on my list! Thanks so much for Vino for sorting out the tasting. It’s also available at Earthy and hopefully more widely too!