Chaopraya’s Ron Zacapa Experience – If you like Pina Coladas…

I recently went along to Thai restaurant Chaophraya, on Castle Terrace, for the Ron Zacapa Experience Launch Party. Chaophraya have partnered with rum brand Ron Zacapa Centenario to create a new Terrace Menu, including special canapes and cocktails. The menu was certainly a complement to the new cocktails, as both were sweet and beautifully presented. 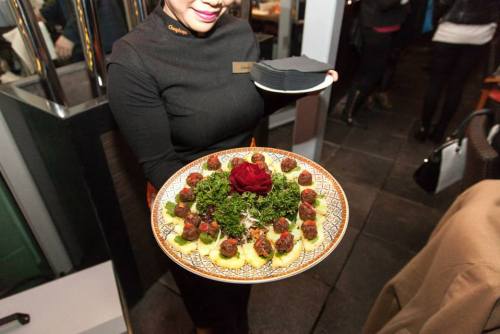 Being more of a foodie than a drinker, I was initially drawn to the canapes. The chicken satay stood out as a favourite. It was served with a light peanut sauce but was just as good without it. The chicken, which been marinated with lime and peanut, had kept the flavour of both and was perfectly moist. I was also impressed with the deep fried pork meatballs served on a tiny sliver of pineapple. They were smoky and fiery, with a meaty flavour that was offset by the sweet zing of the pineapple. 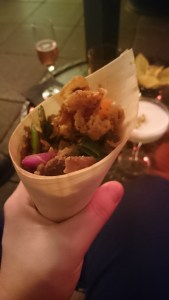 Without a bit of a batter would have been better.

More disappointing was the duck salad. Served in a charming cone made from a dried palm leaf, it was a mixture of battered duck, red onion and spring onion. It tasted overwhelmingly of onion though and it seemed a shame to have battered the duck. It could have been left pink, served in slices and have better retained its flavour and texture.

Delicate baskets of golden tempura containing flaked cod and pomegranate seeds were closer to the mark for me. The baskets were crispy and the cod was sweet with palm sugar and kaffir lime. However, whilst the sweetness was moreish it was also overpowering, with only a hint of fish coming through.

Lastly we sampled some juicy Thai fish balls. The flavours of fish and lime were very well balanced, light and authentic. Spot on.

Having fully assessed the food offering, our attentions were turned to the stars of the night: the cocktails. The new selection available at the terrace bar comprises various spirits, including the showcase Ron Zacapa rum and others in the brand like Ketel One vodka and Tanqueray gin. The smoking Pina Colada was a firm favourite, with bell jars housing the Coladas under plumes of hickory smoke whizzing past us to excited guests all night. When we finally managed to flag down one of the busy waiters and secure some of our own, we could see what all the fuss was about. 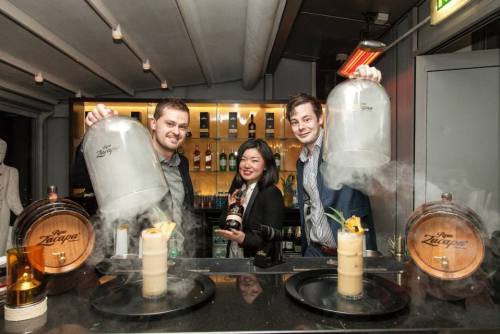 Upon delivery, the bell jar was removed with a flourish and a puff of smoke. A tall glass filled with a pretty cocktail, garnished with a wedge of pineapple, a twist of orange and a maraschino cherry, was revealed. The mix of Ron Zacapa 23 rum, coconut cream, vanilla sugar and pineapple juice was surprisingly refreshing and not too sweet or strong.

We also had a Bramble, with gin, cranberry and a squeeze of lime, which appeared in a tall glass, glowing pinky-red and topped with a blackberry. There was a Caprioska too, with Ciroc vodka, lime and sugar syrup; short, pale and finished with chilled grapes. Both were refreshing and mildly fruity, two classic serves that let their premium spirits shine through.

Overall I would highly recommend the Roof Terrace at Chaophraya for a fancy first date or a celebratory night out. Sipping a superb cocktail, enjoying some excellent Thai nibbles and considering the castle would be a wonderful way to enjoy a summer’s evening. 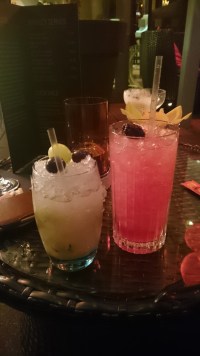 Amy attended the launch as the invitation of Chaophraya