Call me naive and granted I’ve yet to visit Thailand but I was under the impression that Thai food is often eaten with chopsticks. Not according to the latest marketing blurb from Chaophraya, who have recently launched a new autumn menu. Apparently it’s only Thai noodle dishes that are eaten this way and they’re on a mission to change preconceptions from what you eat, to how it is served. 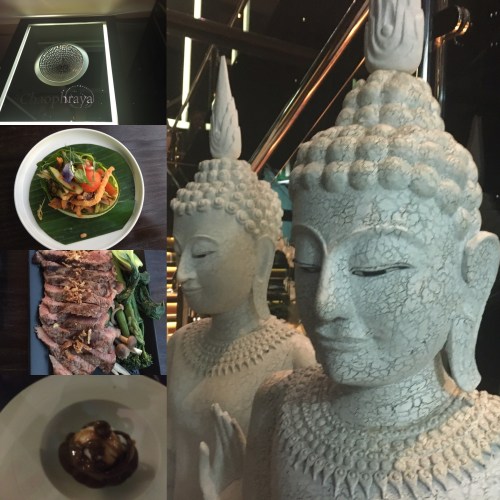 Chaophraya is elegant and classy with views to die for

So I jumped at the chance to try it out. The new menu mixes contemporary dishes inspired by tastes from across Thailand to the classic stables including red and green Thai and Massaman curries.

Chaophraya is certainly a restaurant with views to die for, especially if you can ‘bag’ yourself one of the tables in the glass enclosed room, which has views across to Edinburgh Castle on one side and the Fife on the other.

Certain provinces have influenced the surroundings including Chiang Mai, the Maeklong River, Khanchanaburi and the banks of the Chaophraya River in Bangkok, from which the restaurant takes its name.

In Thai culture, they eat ‘family style’, sharing food ordered with those you are dining with. There’s one fatal flaw though with this concept in that, if there’s only two of you, you need to hope that your dining companion doesn’t have dislikes or food allergies as it could limit your choices!

My dining companion, PS, started with the soft shell crab and squid tempura which is served along with wing bean and asparagus tempura, with a chilli and lime avocado dip, whilst I opted for the crispy duck salad. With a seafood and fish allergy, there wasn’t the option to dine ‘family style’, although I did have a bite of the asparagus tempura with the avocado dip, which was crispy and very tasty.

My salad, roasted crispy duck strips tossed with cucumber, shallots, spring onions, celery and pomegranate in a roasted chilli and lime dressing, was beautifully presented and sculpted like a work of art.

It was healthy and clean tasting but had I chosen this as a main, I might have been left still feeling rather hungry but as a light lunch option, or for those on a diet, it could work.

For our mains, PS opted for the green vegetable curry, with rice as a side. Served in a bowl, it had Thai aubergines, sugar snap peas, courgettes and tofu garnished with sweet basil and chillies.

No sharing ‘family style’ this time either as anything with tofu, is only fit for being confined to ‘Room 101’, as far as I’m concerned.

I was intrigued by the chamber aged sirloin steak, a seared 8oz sirloin steak, which you cook yourself on a Himalayan rock salt block. As it is served with a tangy chilli dip alongside stir-fried shimeji mushrooms, onions and Bok choy, I was advised that I wouldn’t necessarily need to order another side. 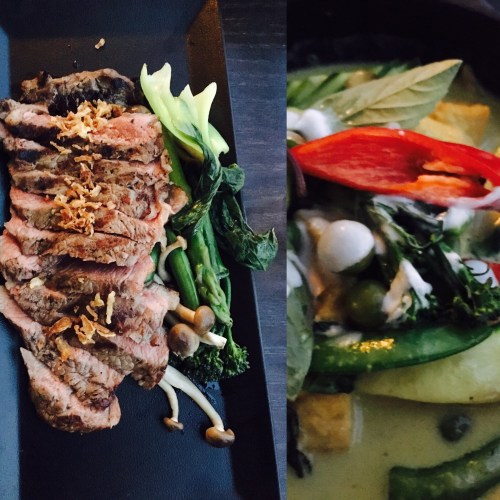 I’d perhaps advise the opposite especially for those with a healthy appetite, although it did mean there was room for dessert.

The beef was delicious and well-sourced and the cooking process, imparted a beautiful salty flavour to the meat. They apparently wash and re-use the salt stone, which was a relief.

The star of the show however was the chocolate bombe. Having for once not loaded myself up on carbs, I had ample room for dessert.

At £7.50 per head, they’re not cheap but it was worth every penny. A melting chocolate bombe with Thai whiskey ice cream and honey and toasted sesame popcorn centre has hot caramel sauce poured over it at the table, with the dessert morphing into an amusing ‘frog-like’ formation. It’s a really theatrical performance. 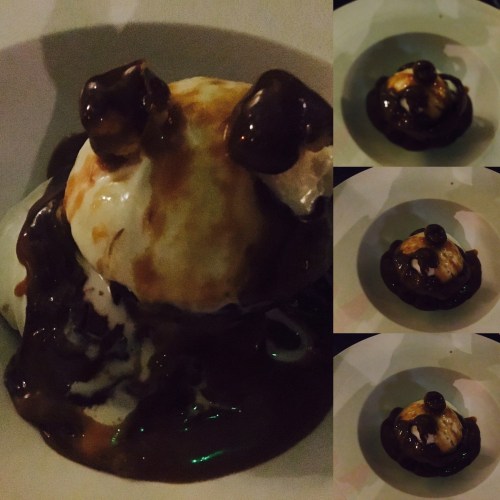 The star of the show – a chocolate bomb

Eating at Chaophraya is certainly a treat, with its opulent surroundings, beautiful waiting staff, dressed in traditional costume and with exciting menu choices.

If you’re a fan of eating with chopsticks, even if I have been doing it wrong for years, you’d better opt for a noodle dish, otherwise you’ll be presented with a knife and fork.

But I’ll be returning again very soon, if just to indulge in one of the amazing chocolate bombes and a cocktail, whilst taking in the views. If my social media feed is anything to go by, when I posted the Chaophraya video of the chocolate bombe, so will many of my friends, including one from Greece who will be visiting Edinburgh soon. And I guarantee you will be too when you watch it  too!

Kerry dined as a guest of Chaophraya