I’ve long been a fan of Thai food, even though I’ve never visited the country and whilst a holiday is not on the cards in the near future, I set myself a challenge of doing a Thai cooking course this year, slightly nearer to home.

I’ve had my eyes on a couple of courses including Krua Thai but settled on the one offered by Chaophraya culinary skills classes on Castle Street, Edinburgh, as I have dined there a number of times and have always been impressed by the service and the cuisine. It also has one of the best views for dining and drinking in Edinburgh.

I wasn’t quite sure what to expect as not a lot of pre-course information is given, other than that on the website, which states that you will be given an introduction to Thai ingredients, a demonstration and hands on session, a tasting session and a Chaophraya goody bag to take home.

We were all greeted with the synonymous warm Thai welcome, accompanied by a big smile and a freshly made bramble or fruit punch cocktail or a non-alcoholic strawberry daiquiri. 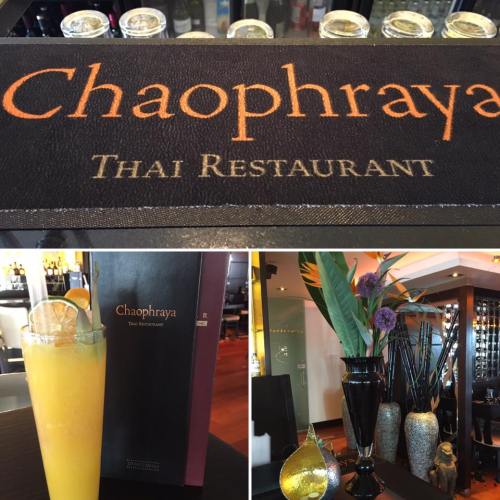 As it turned out, there were eight of us, which included three couples, myself and another male singleton. We were seated at two tables at the near end of the drinks terrace, where a pop-up cooking station had been set up with two electric hobs and a big tray of ingredients.

Our hostess Mo explained that our chef would be demonstrating how to make three dishes that night: a Tom Yum soup, a Panang Curry, finished off with bananas cooked in coconut milk, before we each got to prepare our own versions.

Thai cooking places emphasis on lightly prepared dishes with strong aromatic components and a spicy edge. It is known for its interplay of at least three and up to four or five fundamental taste senses in each dish or the overall meal: sour, sweet, salty, bitter, and spicy.

The everyday basic herbs in Thai cuisine have many health benefits, and they taste great too. Here are just a few examples of what some favourite Thai ingredients can do for you:

Tom Yum soup is a Thai soup, usually cooked with shrimp but dietary allergies were catered for and in my case, as I am allergic to fish and seafood, used chicken instead, whereas the vegetarian in our group used tofu as a substitute.

There weren’t any exact measurements for the ingredients used, which comprised chicken stock (or water in the case of the vegetarian), galangal, lemongrass, kaffir lime leaves, mushrooms, chicken, tomatoes, chilli paste, more fresh sliced chillies, lemon juice and fish sauce, which I omitted due to my allergies. It was a case of add, taste and add more according to your taste-buds and how spicy you like your food. As you’re only cooking for yourself, you only had yourself to please.

The Penang curry was equally as simple to make – which for me is one of the joys of Thai food. A tablespoon of vegetable oil is added to a wok, followed by two large ladles of coconut milk, followed by some Panang curry paste, readily available at any of the Asian shops on Leith Walk. The mixture is then brought to a simmer. When it is bubbling, some cooked chicken is added or if you prefer, prawns or tofu can be used. Kaffir lime leaves, along with some vegetables were added by me to ensure I had some of my five a day, although I’m not sure how authentic that is! The finished dish was served with some some sticky Thai rice.

Our dessert called for the use of yet more coconut milk, which is heated in the wok, to which you add sliced bananas, a spoon of salt and sugar (depending on your individual taste) and a pandan leaf. This was my least favourite part of the evening but probably has more to do with the fact that as far as I am concerned, cooked banana should be confined to Room 101.

Pandan, also known as screw pine or palm pine is a herbaceous tropical plant that grows in Southeast-Asia and is often used to flavour drinks and desserts but can also be found used in savoury dishes.

We were also shown the knives and tools used to make the intricate Thai fruit and vegetable carvings that often adorn a Thai meal and shown some books unveiling the tricks of this intricate art but as they were all in Thai, we were left none the wiser other than it looks likes years of learning and patience!

And there our evening ended. You’ll be sent home feeling pretty full and contented with life and with a Chaophraya goody bag, comprising some recipe cards, your Chaophraya apron and chef’s hat, a discount voucher off your next dinner and a bottle of Singha.

If you like Thai food, making small talk with strangers and good company, then this is the course for you. At £60, I thought it represented good value. You may not go home with many new skills but it’s an insightful course giving you a better understanding of Thai food and the ingredients that make it so special and is something that you can easily replicate at home.