A new menu at Revolution

Having spent a few evenings at what I affectionately knew as “Vodka Rev” during my Freshers’ Week many years ago, I was not sure what to expect of the food offered on Revolution’s new menu. If I’m honest, all I was really aware of was the fact that they did trays of interestingly flavoured vodka shots. I was therefore pleasantly surprised to find that the restaurant menu was full of things that I was quite keen to eat. 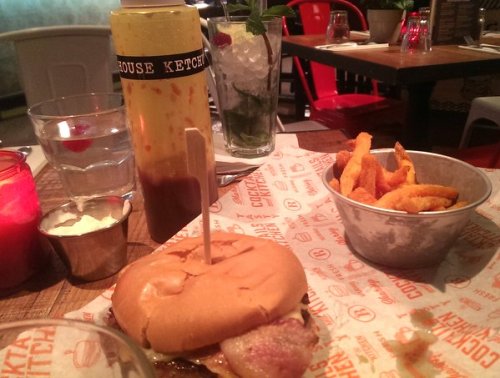 Although my dining companion and I had previously sworn to eschew cocktails, it being a Tuesday night, we could not resist when we saw the selection. Ever a traditionalist, he opted for the classic Mojito, while I sampled their raspberry and basil version. I didn’t find the flavour of raspberry to be as strong as I expected, but there was certainly a refreshing sharpness to the drink, and the basil added a very nice counterpoint to the rum.

The food was difficult to choose, as there is something for everyone on this menu and we would both have been happy to eat most of the items listed. There are all the things you would expect to find in a bar/restaurant such as pizza, flatbreads, burgers, sandwiches and wraps, as well as hot dogs but all of these items have been refined with the addition of more interesting condiments and garnishes.

I have a profound love of hot dogs, but was craving a burger so decided to share a plate of Dough Dogs as a starter. The Bockwurst was exactly as I had hoped: salty, juicy and wrapped in chewy dough which had been drizzled with ketchup and American mustard. We were off to a good start!

For the main, I ordered the Smokin’ Bacon Burger, while the Traditionalist opted for the Classic Steak Sandwich. The burger was nicely caramelized on the outside but still moist and flavoursome, the brioche bun was soft and the chorizo ketchup brought a nice level of spice to the mix. If I were to criticize something, I would have liked the bacon to be a bit crispier, but it was still a very tasty burger. The steak sandwich was also a hit, packed with nicely cooked strips of rump steak and complemented with the addition of the Dijon mustard and onions. The ciabatta roll, however, was nothing special. 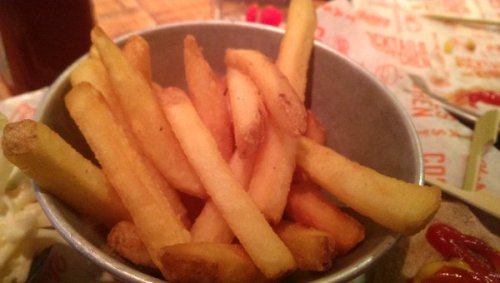 One particular star of the evening, however, was the House Ketchup which was brought to accompany our chips (sweet potato for me and classic for the Traditionalist). The chips themselves were great, crisp on the outside but fluffy within and not too thick cut but they were really brought to life by the House Ketchup whose secret ingredient we were unfortunately unable to guess. I would actually have described it as more of a barbecue sauce, but it was slightly sweet, slightly smoky, with a background heat from spice which made it very enjoyable indeed.

Finally, I decided to indulge myself at the recommendation of our very friendly and attentive waiter and try one of their specialties: the Chocolate Fluffwich. This turned out to be a decadently sweet confection of marshmallow fluff and Nutella sandwiched in brioche and then deep fried. It proved too much for me to finish after everything else, but it was certainly enjoyable, particularly paired with the slightly sharp blueberry sauce. Our waiter confessed that he had had to limit himself to one a week and I could understand why that would be necessary but also difficult. 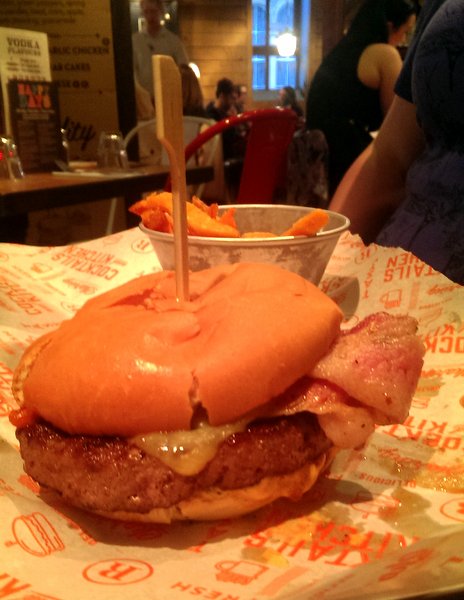 Overall, I would say that Revolution has something to appeal to everyone, which was reflected in the wide range of clientele there on the Tuesday I visited. I would strongly recommend it as a place to go with a group of friends of an evening for some tasty cocktails and well-executed bar food with a twist. With 50% off food on Mondays, it would make an excellent place to fend off the Monday Blues, while £4 cocktails in the week make it an appealing place for an after work cocktail with friends or colleagues.