Formally the Skean Dhu, provocatively-named La Petite Mort is making noises on Edinburgh’s food scene with its creative and modest menu. Its name refers to French slang for being over-full, but is most commonly defined as “orgasm.” Would the food be as pleasurable? 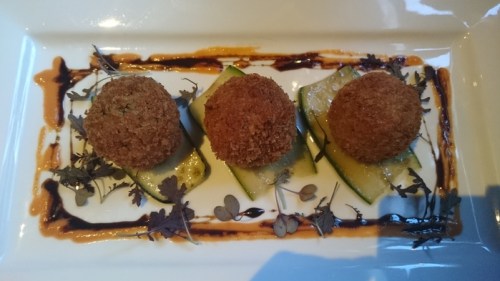 La Petite Mort is joined to traditional Tollcross pub, Bennets, but tucked away around the corner on Valleyfield Street. The revamped restaurant offers an on-trend menu with well executed, meat-heavy, better-than-pub-classic food. Our starters were pretty damn good, but the mains were even more superior.

I began with the black pudding and goats cheese bon bons, which were marvellously rich and dense with a perfectly thin and crunchy breadcrumb coating. My only complaint was that they were a little too large for a starter, but the courgette ribbons were a welcoming, moist accompaniment. 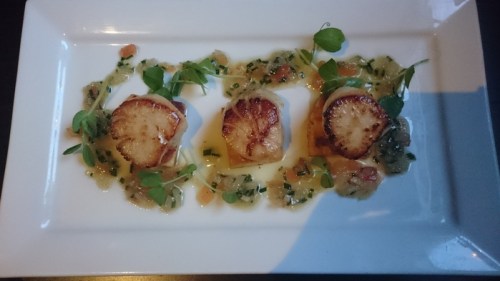 Dining pal Charlotte was drawn to the smoked halloumi, salsa vierge and scallops. The tangy salsa vierge nicely offset the bouncy scallops and the salty halloumi, which was well smoked and equally well cooked. However, I felt it was too overpowering for the delicate scallops and was best enjoyed separately. Still, it’s a dish I would definitely order again to enjoy its varied elements.

For mains I was very pleased with my sea bass and tempura aubergine; a great carb-light combination, with a generous portion of celeriac and apple puree and wilted spinach. The tempura was crispy and flavoured with delightfully delectable sesame. What little oil there had been was absorbed by the fish and its incredible crispy skin. It was a light dish that was extremely satisfying and an imaginative combination that really worked. 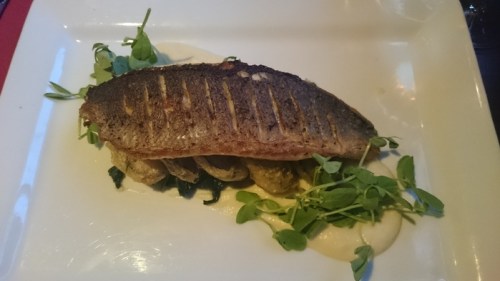 Charlotte was very happy with her choice of trio of pork. The slab of loin was just the right kind of pink, moist and accompanied by a flaky, flavoursome cheek. There were lots of ‘mmm nom nom’ noises from her side of the table, which made for some ‘hmm jealous’ mumbles from me, even though I loved my fish. Her potato fondant was well done too, firm at the edges and soft in the middle, and the pulled pork “sausage” roll is worth going for alone: soft pork with tiny chunks of carrot encased in an expertly seasoned pastry. Mmm nom nom… 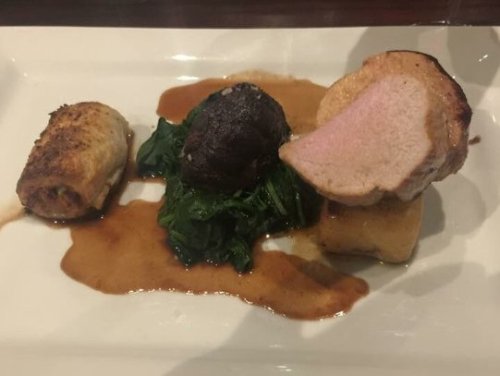 Pulled pork roll, cheek and loin on the fondant

For dessert – which was driven by greed rather than necessity – we had the cheese selection and the Earl Grey fondant. The fondant came with both ice cream and custard – the decadence! – but the Earl Grey was sadly unnoticeable. It was also more of a light chocolate sponge cake, as it lacked a runny centre. The cheese comprised cheddar, blue and brie and was served in fantastic doorstop-sized pieces, along with artfully arranged apple slices, a wonderful pistachio and plum chutney and artisan oatcakes from Perth.

Another absolute delight was the wonderful staff, who were very jolly and demonstrated excellent knowledge of the wine menu. Each course was well matched and our cocktails with dessert – a Brockman’s Martini for Charlotte, and a Woodford Reserve Old Fashioned for me – were both well balanced and delicious. 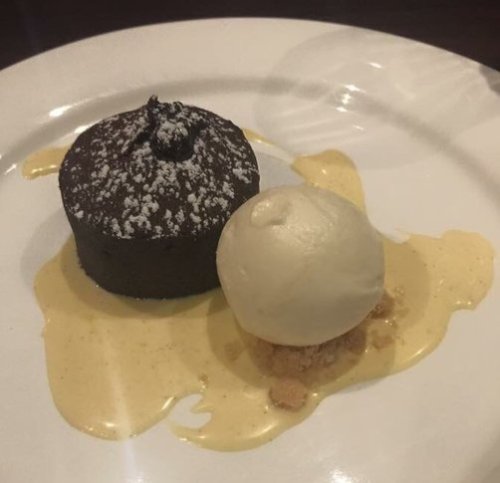 Fondant with ice cream and custard

A lot of thought has gone into the menu at La Petite Mort and give or take a few wrinkles, it’s well delivered and reasonably priced. They responded to questions and dietary requirements attentively and Charlotte said she would definitely recommend it to a friend. I agree: it’s a first rate choice for a local dining option or as a meal before catching a show at the adjacent King’s Theatre. With a thoughtful selection of wine and cocktails, a visit to La Petite Mort makes for a wonderful evening out.

Amy dined at the invitation of La Petite Mort