Chop House – On a New Block

There’s some exciting things happening at the Arches on Edinburgh’s East Market Street, near Waverley Station and the newest kid on the block is Chop House.

This second Chop House bar & butchery* opened its doors on 11 August, following hot on the heels of their Leith one, which opened in September 2015. They’re already starting to make waves and have recently been nominated in the ‘Best Steak Restaurant’ category in the I-on Food and Drink Awards, voted for by I-On readers. 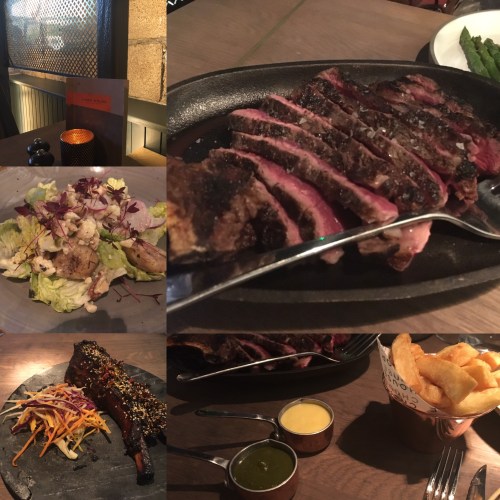 New kid on the block – Chop House at the Arches

Set within a stunning C-listed brickwork arch, the split-level interior 60-seat restaurant and bar enhances the architectural details of the original stone structure, using lots of industrial type metal. Sitting downstairs, it had the air of an urban New York dining experience, except the vista was that of the stunning Calton Hill.

The focus of the menu is British beef, butchered in-house then dry-aged for up to 90 days, in an on-site specialist fridge, before being cooked over an open-flame charcoal grill.

Their meat is sourced from two suppliers – Shaws Fine Meats, a traditional, artisanal, family-owned butchery who source their meat from St Boswells Market and from local farmers; and Hardiesmill, a boutique farm specialising in pedigree Aberdeen Angus cattle, based in the Scottish Borders.

Sociable dining is central to Chop House’s ethos, with large sharing steaks such as chateaubriand, bone-in rib and porterhouse taking centre stage. These specialist cuts are available in varying weights between 500g and 1.2kg and are designed to encourage a sharing experience around the table and are priced at market rate.

Prime cuts such as fillet, sirloin and rump also feature on the menu alongside dishes such as steak burger, lobster and pork tomahawk. The sharing culture is encouraged across the menu allowing tables to create their own feast of dishes such as oysters, scallops and hot chicken wings to begin with, as well as a variety of sides to complement the main course offerings. Make sure you go in with an appetite.

Tara, the lovely manageress of this new venture, explained the menu to us. My dining companion, ‘F’, started with a healthy ‘charred pear salad, served with Buck Blue cheese and walnut’, whilst I opted for the ‘fiery BBQ rib’, served with sesame crust and coleslaw. 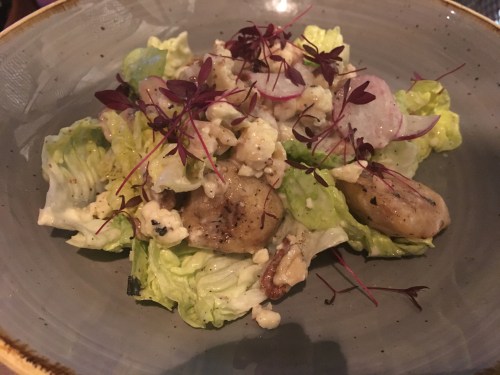 I was half expecting some miniscule portion, akin to the type you might get in a Chinese restaurant, but the slab of meat was large, succulent and falling off the bone and just delicious. Next time however, I might forgo the starter and head straight for the mains as the portions are quite huge. 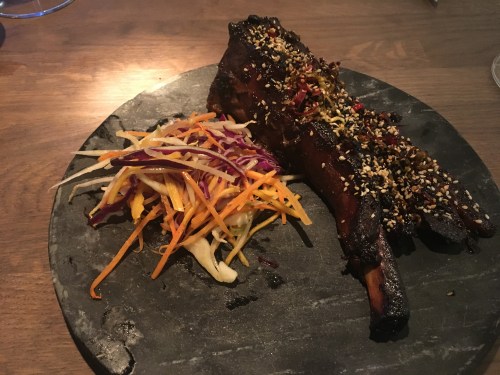 We opted to share a medium-rare porterhouse cut for our main, weighing in at 700g, with different sauces served on the side. I chose the burnt butter hollandaise, with ‘F’ choosing ‘chimichurri’, a piquant South American sauce of parsley, oregano, garlic and chilli.

The ‘king of the T-bones’, the porterhouse cut was cooked to perfection and was the tastiest steak either of us had eaten for a very long time. Although cooked on the bone, chef had kindly carved it for us off the bone, serving it on a cast iron skillet. 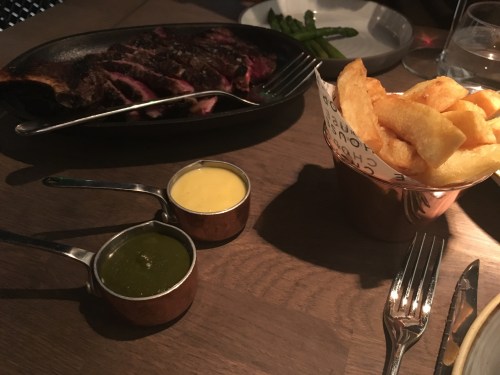 The Porterhouse – a sharing steak

We opted for a range of sides including the spring greens, asparagus, dripping chips and whilst I was tempted by the mac cheese, I decided that would have been just plain greedy.

We were both fit to bursting but a sucker for anything listed as salted caramel, I found a little more room for one scoop of ice-cream. It was the perfect end to my meal.

And it’s not just dinner that Chop House does. They offer an express lunch menu on weekdays, whilst every weekend brunch is served with dishes like steak and beef-dripping eggs and the Butchers Breakfast served alongside house-recipe Bloody Marys from 10am-3pm. On Sundays, the Chop House celebrates roast beef, with a special menu offered throughout the day when diners can enjoy various cuts of beef with all the trimmings.

I also can’t wait to book in for their ‘Corkage Club’ on Tuesdays and Wednesdays, where for a small corkage charge, you can bring your own bottle. With independent wine supplier, Vino, located next door, this is a no-brainer.

If you want to be part of the in-crowd, I’d make a booking pretty quick as Chop House is destined for great things. And if you do get to try it and like it as much as we did, vote for Chop House in the I-On Food and Drink Awards, which closes for voting at midnight on 6 October. At time of writing, they were top of the leader board in the steak category.

Kerry dined as a guest of Chop House

Chop House at the Arches