I was delighted to attend Solid Liquids’ first event of 2017, joining a group of gin lovers aboard the very purple Lochrin Belle canal boat. We spent two hours cruising the Union Canal, starting down from Akva in Fountainbridge. 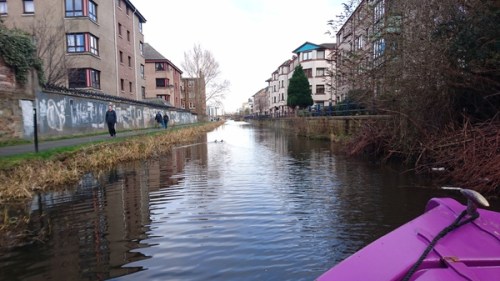 Cruising the Union Canal on the Lochrin Belle

Host Jamie kept the group entertained with facts, whilst barman Andrew poured our Scottish gins; we enjoyed five altogether, each neat then mixed into a cocktail. 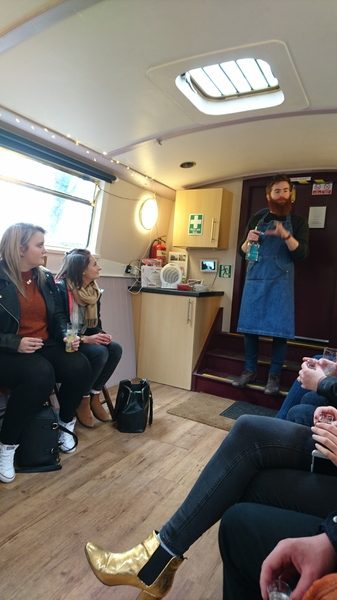 Jamie telling us about gin

Our first was Pickering’s orange top, which Jamie taught us how to taste like a professional with sipping and swilling. The cocktail was an easy-drinking tropical mix of mango puree and pineapple juice, garnished with a slice of fresh pineapple. Off to a good start. 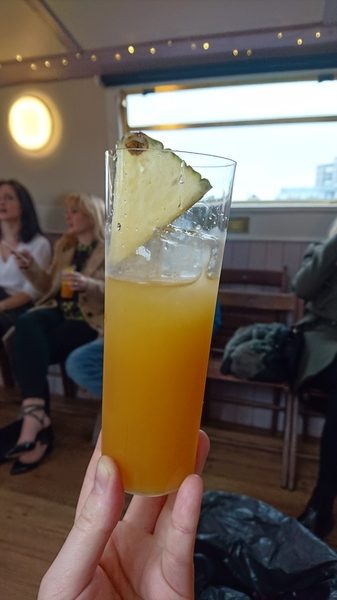 Sound good? The nice people at Solid Liquids have helpfully written up their cocktail recipes, and you can find them here. 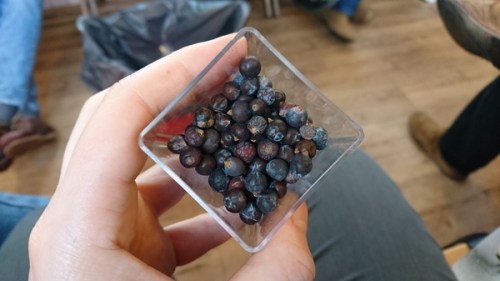 Whilst enjoying our Pickering’s concoctions, Jamie told us how gin was originally a Dutch drink, which gave rise to the term Dutch courage. Juniper was believed to give good health, so soldiers drank gin with tonic as its quinine warded off mosquitos. Of course, drinking before battle gave them fighting ‘spirit’ too. 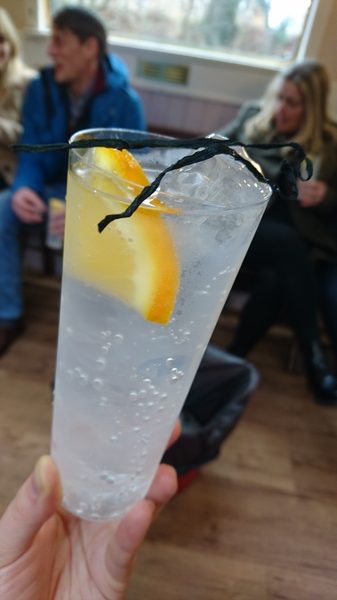 Next we enjoyed Shetland Reel as part of an Ocean G&T. It was made with wonderfully crisp Bon Accord tonic, garnished with fresh orange and thin dried kelp pieces. The gin had an aroma of herbs and spices and a lovely slightly salted taste. We enjoyed it with a bite-size morsel of garlicky mushroom pate on a more-ish oatcake, courtesy of catering company Inside Out Chef. 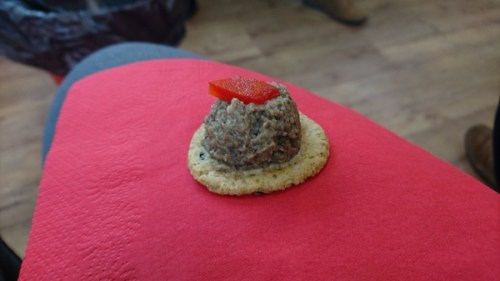 Mushroom pate from Inside Out Chef

As we made a U-turn somewhere past Corstorphine, we sampled a Minus 33 “gin.” It turns out gin isn’t considered gin if it’s less than 37% abv, but Minus 33’s creator decided after much experimentation that 33% brought out the flavours best. It was certainly a smooth drink, and delightfully enhanced by the Solid Liquids team with hibiscus syrup and a slice of dehydrated lemon. 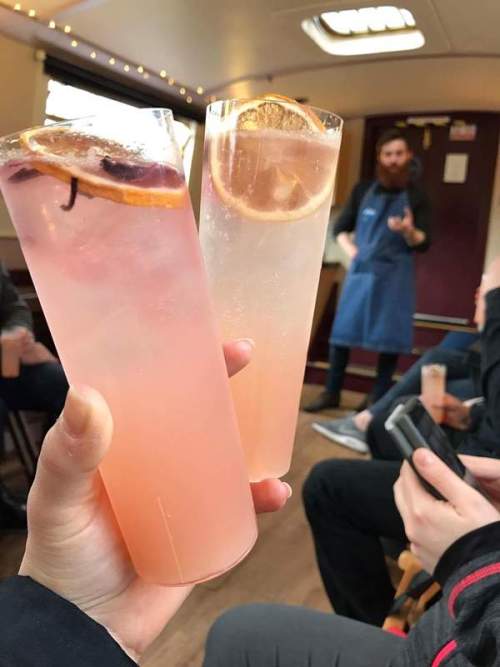 Minus 33 with hibiscus syrup 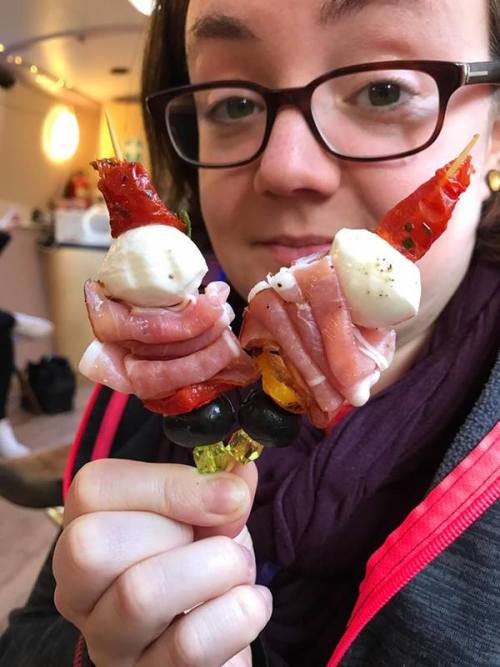 Our next gin, Makar’s, was presented in a beautiful seven sided bottle, representing its seven botanicals. Mixed with guava juice and garnished with a fresh basil leaf it was a little lost, but quite refreshing. 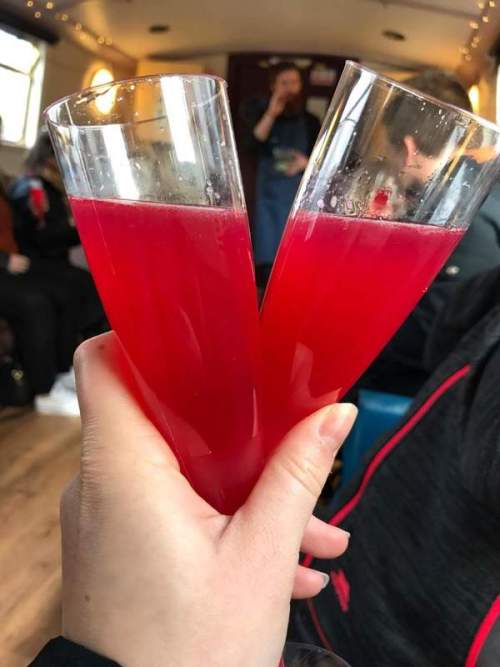 Makar’s with guava and basil

Now several gins in, we were grateful for our mini dessert; a sticky, zingy orange cake, topped with whipped cream and a wee raspberry. 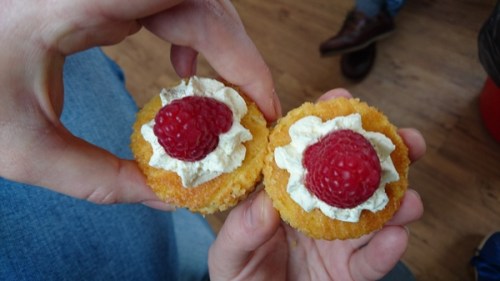 We finished with a serve of Arbikie, who create their spirits from grain grown on their farm. Now well practiced in sampling, we were allowed to choose the mixer we felt was most complementary but also to our tastes – a tricky choice, with a wide selection including Fentiman’s elderflower, Victorian cloudy lemonade, Seville orange and Bon Accord tonic. An array of garnishes were available too, and I enjoyed the dried fruit in particular for its zestiness and bite. 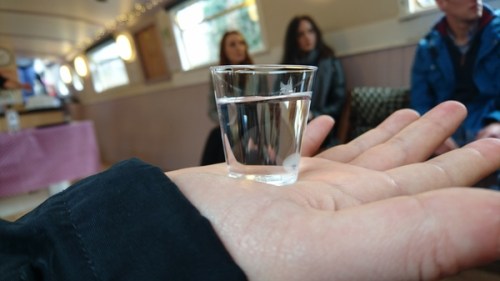 By now we were moored back at Fountainbridge, and I was left thinking what more could you ask of a Saturday afternoon than an opportunity to taste local gins with a pal, whilst gently cruising along a canal? The boats are run by volunteers and make for a novel location, and the gin was great refreshment, delivered with an informative angle. Highly recommended. 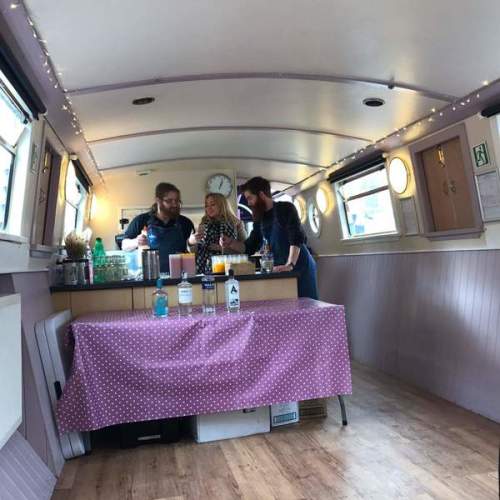