Cucina: contemporary Italian cuisine in the heart of Edinburgh

I have often popped into the G&V for a drink during the festival en route to see a show in George Square, but for some reason I have never made it to the hotel’s restaurant offering – Cucina. This all changed last week when my husband and I had a long overdue date night. 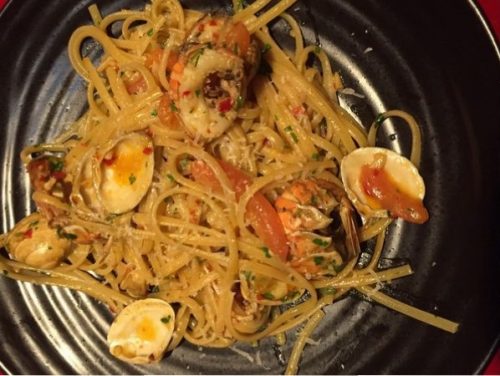 I’m obviously behind the times, as I haven’t been inside G&V since last summer, but love the new look as you enter with the massive white marble table which sits grandly in front of the bar, Epicurean. We popped upstairs to Cucina and it didn’t take me long to spot the gin terrace just outside. It’s a really cute little space that would be a wonderful haven during the Festival, where you can escape off the Royal Mile through its own tiny close directly onto the terrace and enjoy a Tanqueray and Tonic!

However, that night it was sadly a wash out, so we couldn’t put it to the test…next time. I loved the very modern prints on the pillars in the restaurant, which contrasted the botanical feel of the wallpaper on the walls behind. It all came together really well and made the space much more interesting and dynamic.

As you might have guessed by the name of the restaurant there is an Italian influence led by head chef Mattia Camorani, who previously worked with Michelin-starred chef Giorgio Locatelli. A new menu had been introduced a couple of days earlier, so we were keen to see what was on offer. The thing I love about Italian restaurants is the flexibility of being able to have a pasta dish as a starter, or as a main. This was certainly a handy solution for us, as we both wanted the sea bream for main, but when I spotted the linguine and langoustine I was more than happy to forego the fish.

But, let’s start at the beginning of the meal with the starters. I love fresh asparagus so picked the asparagus, parmesan, langoustine mayo and egg mimosa, while hubby opted for roasted sardines filled with almond, orange and sultanas on a bed of lemon and fennel. 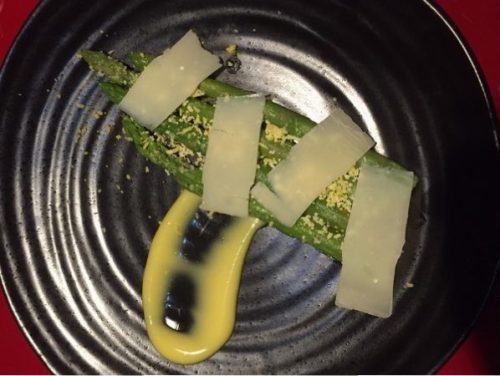 The asparagus was a very simple, fresh dish with shavings of parmesan. The mayo was very light and for me had a slightly lemony taste. While the fennel and thinly sliced lemon provided a wonderful textural contrast to the succulent sardines wrapped around the ground almonds and sultanas. 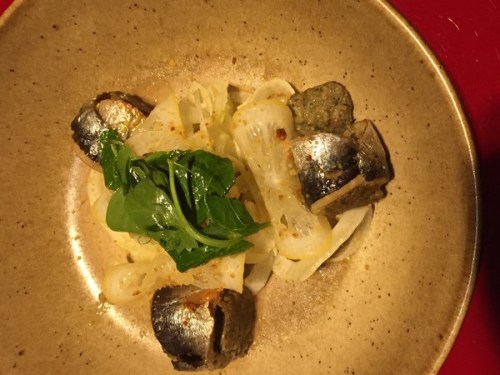 I had been worried I might have food envy with the sea bream, but have to say I was more than happy with my choice with the langoustines and clams tossed in linguine. The pasta was so fresh and combined with the seafood, a delicious light sauce coated the pasta to create the perfect taste of Italy.

As for the sea bream, it had been pan fried with a topping of black olive pate, spinach and balsamic vinegar dressing. This was served with colourful juliennes of radish and spring onion. The skin was lovely and crisp and the topping had a nice crunch to it, which complemented our side dishes of zucchini fries and broccoli. Both were very nice, however the broccoli in garlic and chilli was outstanding, but the portions could have been larger for the veg. 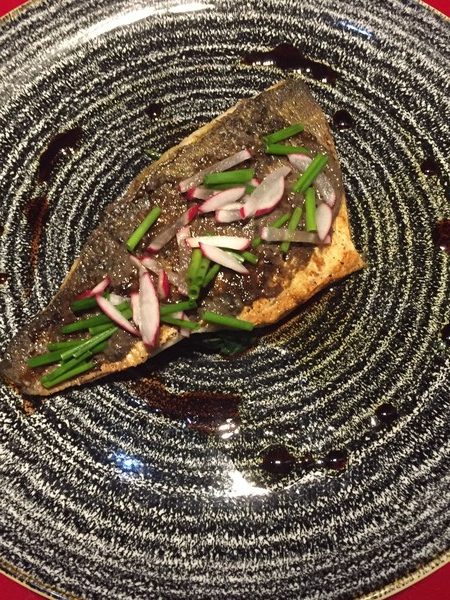 Having eaten very well up to this point, I was unsure if I could actually manage a dessert, but it didn’t take much persuasion from our friendly waiter. And instead of deciding to share one between us we went the whole hog and had one each. So, alongside the traditional Italian pudd of Tiramisu, we also tried the marinated strawberries, almond biscuit with a balsamic vinegar glaze.

The tiramisu was an indulgent creamy affair, that seemed to have an alternative take on the more traditional version I have eaten and made before. There was something quite more-ish about it, however the strawberries did not work for us. The effect of the marinade somehow altered the taste of the fruit, but the texture and after taste was almost like over ripe fruit when it starts to ferment. Despite not liking this part of the dessert, we really enjoyed the refreshing strawberry sorbet on the side.

We had a relaxed, leisurely evening and the staff certainly made us feel at home. It was a really enjoyable meal and a nice surprise for a hotel restaurant, I often feel hotels don’t quite get the mix of the food and atmosphere right to appeal to the local market, but this worked well and had a good crowd in for a dreich Thursday summer’s night.

Nicki was invited as a guest of Cucina.