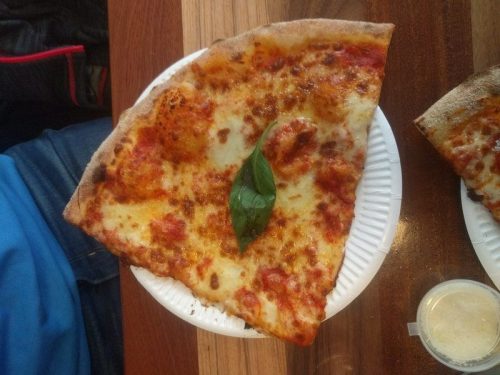 I’m already a fan of Civerinos. I love the ‘slice’ concept – more places should offer it – but I have also been known to enjoy their full 20” pizza. (Not alone!) Civerinos offer many varied toppings that keep me coming back, with a core selection and daily specials always available by the slice.

On this occasion, we opted for three slices between two, starting with a classic Margherita as a benchmark. Secretly, I thought my pal had gone a bit vanilla, but it was a quality choice. Rich tomato sauce, plenty of flavourful mozzarella and a token basil leaf for aromatics.

However, having made a first time visit to Solo Pizzeria a few nights before, I found Civerinos’ crusts weren’t as light, puffy or doughy; most likely due to different cooking methods and being held hot rather than served immediately. But that’s part of the experience, and they were still thin and crispy.

Our second and third slices were a little more adventurous. First, we opted for Porky’s Revenge, with pulled pork, spinach and sriracha. I had expected a sweet, weighty pig-fest and was a little apprehensive about how greasy pulled pork pizza might be. So I was pleasantly surprised with what arrived; the stringy pork spread across the slice was tasty without being dominant, with a mild kick from the sriracha, and fresh spinach providing a little texture. 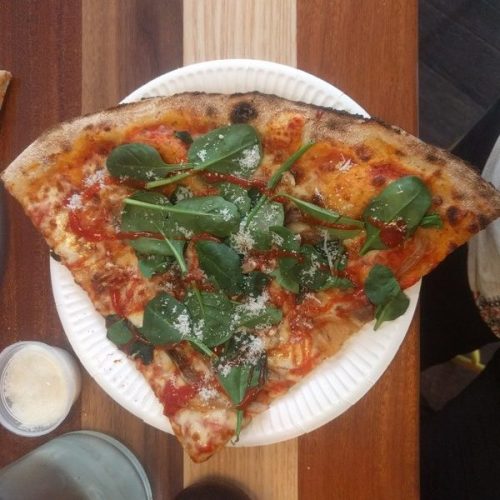 On the recommendation of our server, we also tried the Silence of the Lambs. Toppings consisted of lamb, potato, mint yoghurt and peas. I was skeptical about having roast dinner foist upon my pizza experience, but since Porky’s Revenge had defied expectation we went for it.

Much like the pulled pork, the lamb was shredded and well distributed, providing flavour without heft. The yoghurt was a considered drizzle; refreshing against the cheese’s saltiness and not too wet. The potato had been my greatest concern, as I expected thinly sliced boiled potatoes, which I’ve had on pizza before and find very odd. Instead, shards of crispy roast potatoes – think along the lines of parsnip crisps – were dotted around. The crunch was excellent and we enjoyed eating them off the top, dipped in the yoghurt. 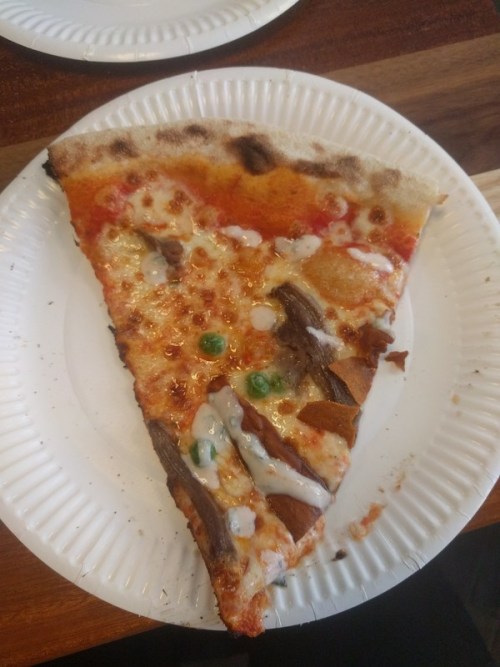 Silence of the Lambs at Civerinos

What will we be back for next time? Definitely the Veggie As, with roast beetroot, goats cheese and walnuts. And also The Rascal, with cauliflower, ricotta, harissa and prosciutto. Most likely as a 20” pizza, so let me know if you’re interested in grabbing a slice…