Dinner and drinks at Foundry 39 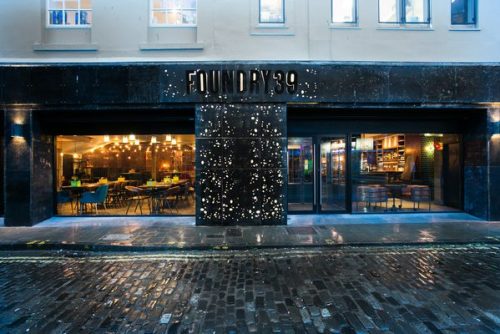 As soon as I arrived at Foundry 39, I felt at ease amongst the familiar on-trend fittings – wood, brick, steel, light bulb filaments – and the large menu of modern pub grub favourites, many of which caught my eye. The Black & Gold burger with black pudding, double cheese and American mustard mayo. Blackened jerk chicken salad. Smoked salmon pizza. Salted ricotta and Nutella pizza bites. Choosing was going to be tricky. 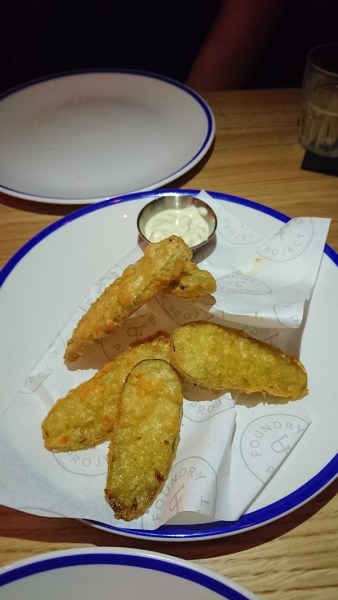 Following much debate with dining companion Charlotte, we opted for… none of the above! Instead, with a lot to catch up on, we started off with a couple of beers, accompanied by fried pickles and blue cheese mayo. Thin slices of gherkin – rather than the cornichons I had expected – made for a better batter ratio, crisp and piping hot with a sour interior, and pleasantly offset by the thick, complementary dip. 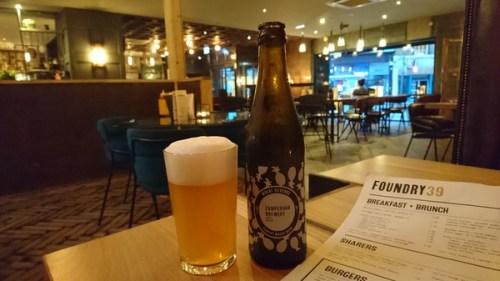 I was very pleased to enjoy beer from local microbrewer Campervan Brewery, part of an unexpectedly excellent beer selection. The Pineapple Wheat Revenge was wonderfully quaffable. 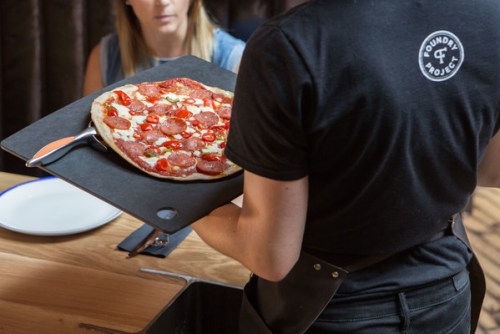 To follow, we shared the beef ragu and chorizo pizza and the Reuben burger, along with a couple more punchy American IPAs. The pizza had an impressively thin and delightfully crispy base, with a moreish meaty topping that was generous but not so heavy as to weigh down the dough. 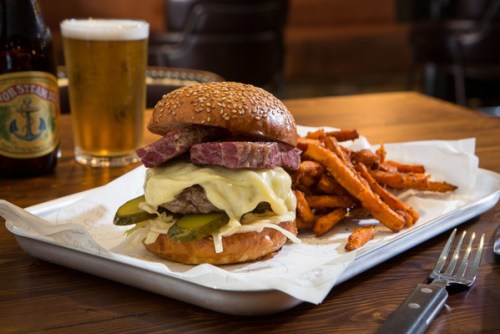 The burger consisted of a fantastic wedge of moist salt beef on top of a burger unfortunately too dry to judge its quality. The brioche bun however was soft and light and the melted cheese was plentiful, so overall we found it sweet, flavourful and enjoyable.

Of course, there were sides to consider. A must-have for Charlotte and I will always be sweet potato fries and we were not disappointed, finding them delicate and salted sufficiently to offset the sweetness without overpowering it. We were less convinced by the kimchi slaw, mostly due to being missold on the kimchi, which was decidedly absent in this dressing-free bowl of sliced raw carrot, cabbage and chilli. Still, it was a welcome contrast to the heavy meat of our mains… 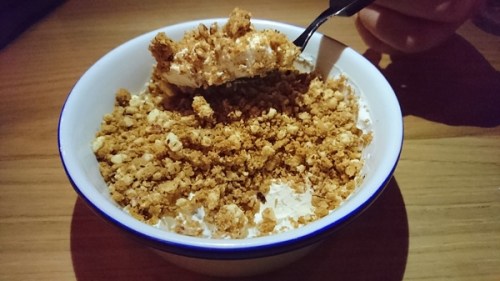 Also decidedly absent was our self-restraint. Despite little room at this stage, we plumped for a pear and hazelnut cheesecake with white chocolate crumb to finish. A sizable bowl arrived – one’s own personal cake, almost – which consisted of a lot of very sweet filling and an excellent topping. We particularly enjoyed the texture: close cheese, chunky crumb. 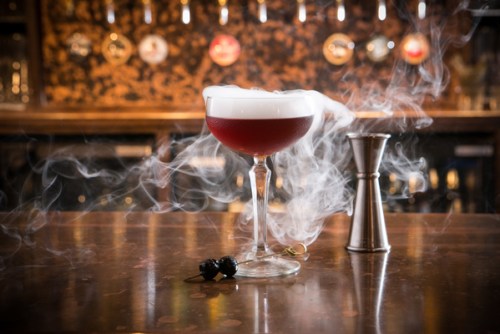 To wash down the cheesecake, of course, we had to try the cocktails. Charlotte chose a Smoked Cherry Manhattan (bourbon, cherry brandy, vermouth); all darkness, smoke and stone fruits and pictured above, whilst mine was a Captain Barbosa (spiced rum, VSOP, ginger beer, lime); tall, sour and sweetened with pineapple. Both were well made and rounded off the evening nicely.

Amy dined at the invitation of Foundry 39

All photos credited Ben Carpenter except pickles, cheesecake and beer