Hawksmoor, Edinburgh – Surf and Turf doesn’t come much better than this

Awaiting the arrival of Hawksmoor, Edinburgh was an understatement, especially as food critic Giles Coren, declares another of its branches as ‘Flawless. The best steak restaurant you’ll find’.

So, despite having already booked a table at one of the soft-launches on the first Saturday, I couldn’t resist accepting a bloggers’ invitation the following Wednesday.  When the food’s reported to be this good, it would have been rude not to.  I’d even taken a wee sneak peek at the menu outside the restaurant late one night on the way home from a cocktail masterclass at the Voodoo Rooms and I was positively drooling – although that might have been from the excess of cocktails and lack of dinner.  Waiting for the date to arrive was almost too much. 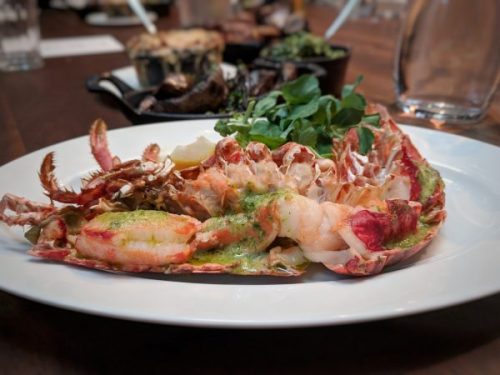 Surf. Half a lobster. Totes delish.

With six other restaurants in London and one in Manchester, this makes Edinburgh their eighth and newest venture. An opulent space with 170 covers, including a private dining space, there’s also a well-stocked bar, where diners can enjoy a pre-dinner drink and watch the Hawksmoor’s mixologists work their magic. Even if you’re not a beer fan, I can highly recommend their Shaky Pete’s Ginger Brew, a mix of Beefeater Gin, lemon, ginger and Pale Ale, which was akin to drinking a refreshing alcoholic ‘Slush Puppy’. Hawksmoor Edinburgh is situated in the stunning former Royal Bank of Scotland banking hall building on St. Andrew Square. For architecture lovers, it’s worth making a booking just to check out this beautiful building that has laid dormant for years; think high ceilings, rich dark woods, cool veined marble and soft leather seating, some in booths, others tables and chairs. 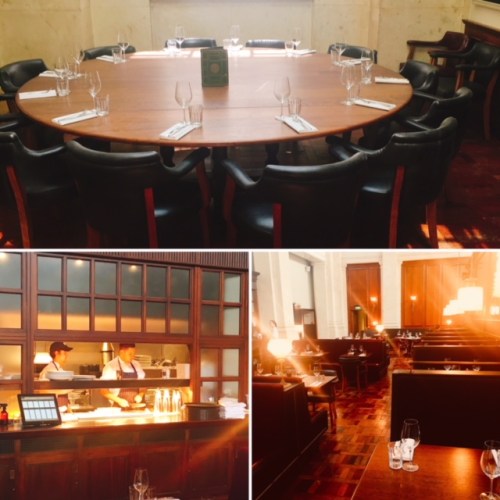 Do take time to lift your necks skywards, away from the inviting food and check out the original etched-glass windows that depict the commercial interests and customer base of the Bank, which originally called the building home. They were created by Scottish artist Sadie McLellan and have been protected in the new renovation.  They are a thing of beauty.

The first diners to christen The McLellan (private dining) Room (named after the artist), 12 of us sat around a dark wood table that just haemorrhaged 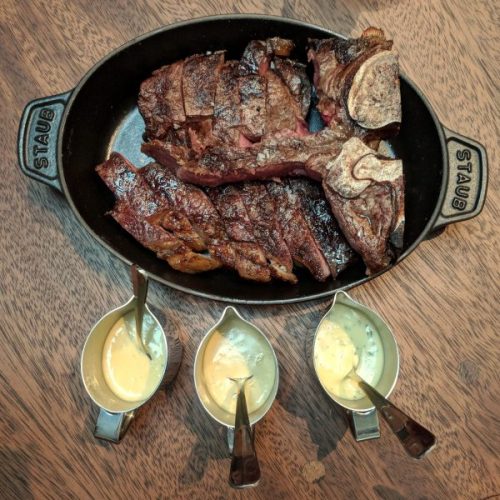 Porterhouse and a selection of sauces. Perfectly cooked.

food all night. Hawksmoor really is a meat and fish eaters’ paradise.

With a menu drawing on the amazing produce that Scotland has to offer, with seafood from around the Scottish coast and beef from grass-fed native breed cattle from both sides of the border, the menu features ingredients from passionate small-scale local producers including hand-dived scallops from the Isle of Mull, bread from Edinburgh’s Twelve Triangles, seafood from Stevie Fish of Fish Brothers, and cheeses from Ian J Mellis.

Steph, our incredibly personable Australian waitress took us through each of the courses, passionately imparting the knowledge that each of the suppliers had shared with staff during their pre-launch training. The wealth of information she imparted, was vast and she went over and beyond the normal course of duty, answering our endless questions. And Emma, our wine waiter, had picked some delicious wines to accompany each course. 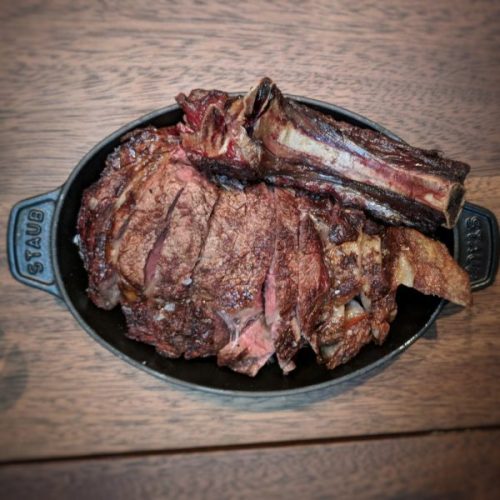 Bone-in prime rib. I wish there was a ten piece coin for scale: it’s a beast!

A banquet from start to finish

Our feast started with hand-dived scallops roasted with white port and garlic; Amstrong’s smoked salmon with crowdie and soda bread; Langoustine scampi with tartare sauce, which I let Caroline and Ailidh of Plate Expectations be the devourers of.  I meanwhile indulged on the non-fishy options, juicy, sweet heritage tomatoes on toast, with whipped vegetarian Graceburn, a soft, raw goat’s cheese that is derived from a Persian Fetta recipe. So simple yet so tasty and the tomatoes actually tasted like tomatoes used to when you were a child. 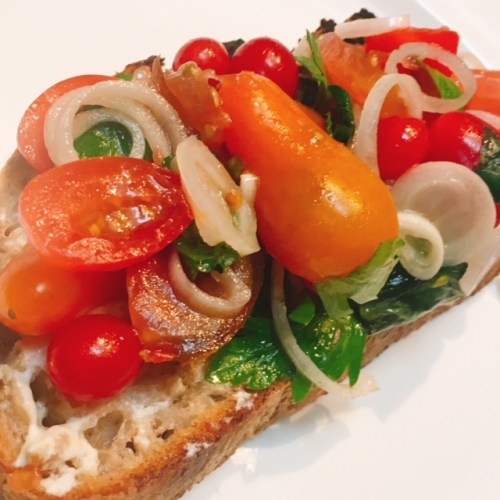 The Heritage tomato salad are what dreams are made of

There was also a clean and simple salad of thin Kohlrabi slices, an often overlooked vegetable that worked perfectly in a salad, mixed with celery hearts and slices of Parmesan.  Emma, our wine sommelier, had matched the starters with a Chilean, Tara Chardonnay 2015, which being unfiltered, had a cloudy appearance but had a lovely buttery finish.  I could have drunk this all night.

The stars of the show – the steaks

Before opening their original restaurant in Spitalfields in 2006, aiming to be the UK’s best steak restaurant, the owners, Will Beckett and Huw Gott, travelled the world in search of the perfect steak, from Kobe in Japan to Argentina’s Pampas by way of Italy, Australia and Texas. And their verdict? That the best steaks come from carefully reared cattle right here in Britain.

All Hawksmoor steaks are sourced from 11 breeds from 700 farms across the UK and are 35 days aged, except for the fillet, which only gets 7 days. The Highland rump, which I had tried the previous Saturday, was my personal favourite, and it seemed the majority of the table’s, is sourced from farmer Iain MacKay from Torloisk Farm on the Isle of Mull.  Described by Steph as having a ‘gamey’ taste, she was spot on. It’s not always available but when it is, do try it. 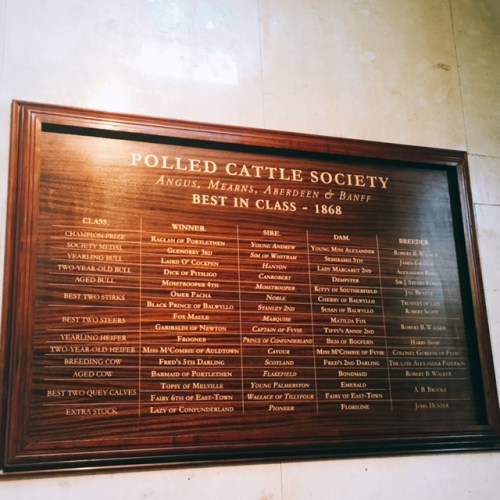 Don’t know your t-bone from your Porterhouse, just ask

Once again our table overflowed with food.  Steph again patiently took us through all the different cuts explaining the difference between each. Their staff are incredibly knowledgeable about the different cuts, so if you don’t know your T-bone from your Porterhouse, just ask.

We were treated to the ultimate Hawksmoor experience, apart from one vegetarian blogger, who dined on a spice roasted cauliflower, IPA raisins, almonds, and yoghurt.

On our menu was Hawksmoor Bone-in prime rib, Porterhouse, Chateaubriand and Highland Rump steak, which were served with triple cooked chips, steak and bone marrow sausages, beef dripping fries, macaroni cheese made with five kinds of cheese, half a lobster, heritage tomato salad (I can’t get enough of this), creamed spinach, juicy roast field mushrooms – all served with a choice of their signature sauces: peppercorn, bone marrow gravy, anchovy hollandaise, Stichelton hollandaise and bernaise.  In all honesty, none of these steaks really needed a sauce as the flavours are so intense but it’s always nice to have something to dip all those chips into, apart from ketchup!

The finale – desserts with hidden pleasures

We were fit to bursting by this stage but somehow still managed room for puddings. Maybe it was a consolation prize for losing the big game that was playing that night! 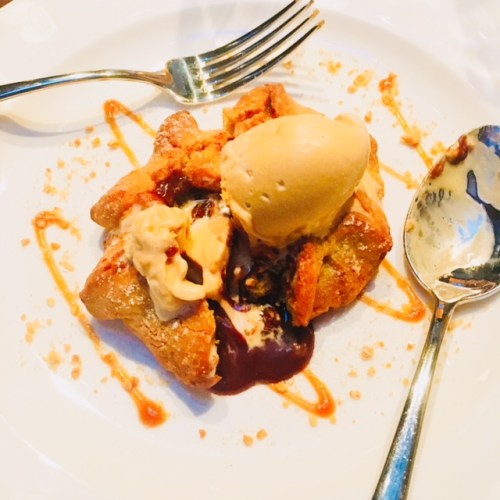 The peanut butter shortbread is a dessert with hidden pleasures

My peanut butter shortbread, with salted caramel ice cream and Original Beans chocolate wasn’t quite the delicate dessert I thought it might be.  Instead a rather rustic, thick shortbread, revealed its hidden pleasure, a chocolate and peanut sauce that oozed out, when you cut into it.  Meanwhile Caroline’s choice of the pineapple and coconut pavlova, pineapple sorbet and coconut ice-cream, was a far lighter affair and probably what I should have opted for but there’s always next time.

Whilst there’s likely to be a lot of criticism about yet another London restaurant/chain/brand opening up in St Andrew’s Square, when you’re doing things as well as Hawksmoor are, you’d be daft to ignore them.

Hawksmoor really lived up to my expectations and more and if surf and turf is your bag, I’d book a table PDQ. It serves fabulous food, presented by knowledgeable and really, personable staff, in a setting like no other.  It needn’t break the bank either. They have a well-priced ‘Express Menu’ of 2 courses for £25 or three courses for £28 (available Monday-Saturday until 6.30pm and after 10pm and all day Sunday), as well as their a la carte and on Mondays, it’s Wine Club Mondays where you can bring your own bottle for just £5 corkage. 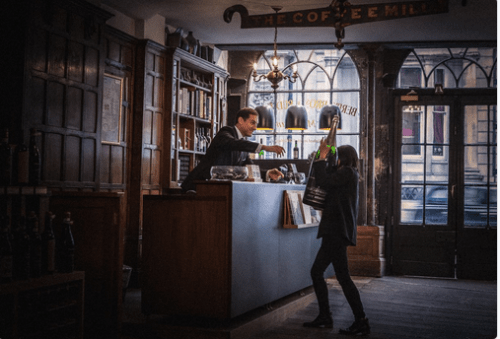 To visit once in a week, is a treat but twice, whilst plain greedy, shows just how good it was and I can assure you, it won’t be long before I’m back again.