Cocktail Master Class at the Voodoo Rooms: Eat your heart out Tom Cruise

They say every day’s a school day and so it was when I attended a cocktail master class at the American Bar at the award winning and very beautiful Voodoo Rooms, one of Edinburgh’s hidden gems, that’s steeped in history – be sure to check out the graffiti on the windows of the ladies’ loos, which dates back to 1875. Who needs Tom Cruise when you have the Social Bitches and me to mix you up a cocktail or six?

A very exclusive event hosted for myself and my partners in crime, The Social Bitches, it was a fun packed two hours, full of tips on how to make classic cocktails and ones with a twist, as well as some educational facts on the spirits used and the history of the drinks we tasted.

The demonstration was hosted by Voodoo’s expert mixologists and we were lucky enough to have the attention of three of the team:  Rosie Paterson, Voodoo’s general manager and also a brand ambassador for St Germain elderflower liqueur; Steven Aitken, a brand ambassador for Arbikie; and Liam, who when he’s not mixing cocktails is rather clever, studying for a masters in something very intelligent but escapes my memory after the amount of cocktails we learnt to make. 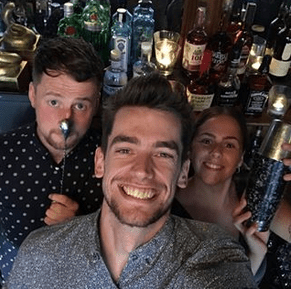 Introducing the expert mixologists at the Voodoo Rooms, Steven, Liam and Rosie

The setting for our cocktail making class was the American Bar, an intimate wood-panelled space where the back bar displays the fabulous array of interesting spirits that are the key ingredients for the cocktails that we were to make.  Larger groups can of course be accommodated, up to 16, with everyone, normally in twos, getting an opportunity to mix their own variations of a classic cocktail.

We started off with a welcoming and refreshing drink of a St Germain Spritz, served with champagne, as my partners in crime are rather partial to the latter, although the normal serve would be with Prosecco or soda, as Rosie, brand ambassador for this spirit took us through the format for the evening and explained the different cocktail making tools that are essential to any mixologists including the Boston tin (the shaker); the ice; the Hawthorn strainer, the £2 tea strainer that they get from Tiger; and the different measures used. Voodoo’s classes are more than just drinking as much alcohol as you can but are instead a more educational affair, which when you’ve finished, will make you appreciate the skills of your individual cocktail mixologists and bartenders next time you order your preferred serve. It’s not an easy job and Voodoo’s mixologists have years of experience among them.

Our second drink, explained by Rosie, was the classic daiquiri, made with white rum, citrus juice (typically lime juice) and sugar syrup. 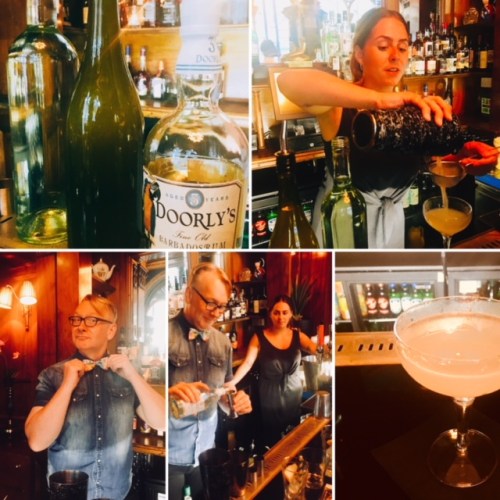 A classic daiquiri expertly mixed by one half of the Social Bitches, Derek, expertly taught by Rosie

Daiquiri is the name of a beach and an iron mine near Santiago de Cuba. The drink was supposedly invented by an American mining engineer, named Jennings Cox, who was in Cuba at the time of the Spanish-American War. It is also possible that William A Chanler, a US congressman who purchased the Santiago iron mines in 1902, introduced the the daiquiri in New York in that year.

Rosie explained that when making a cocktail, the alcohol is the last ingredient to go into your Boston tin, which means that if you get the measures wrong, it doesn’t end up being an expensive mistake.

She mixed us one, using 1/2 shot (12.5ml) of sugar syrup or gomme, 1 shot (25ml) of freshly squeezed lime, 2 shots (50ml) of White Darley’s rum, 3 years old, shaken with ice, and strained into a coupe glass and served with no garnish and then it was our turn at having a go, with Derek, the first to take to the floor nervously.

Next was Tommy’s Margarita, showcased by Steven. This classic tequila cocktail was created by Julio Bermejo in the early ’90s at his parents’ restaurant, Tommy’s Mexican Restaurant in San Francisco where it’s still offered. 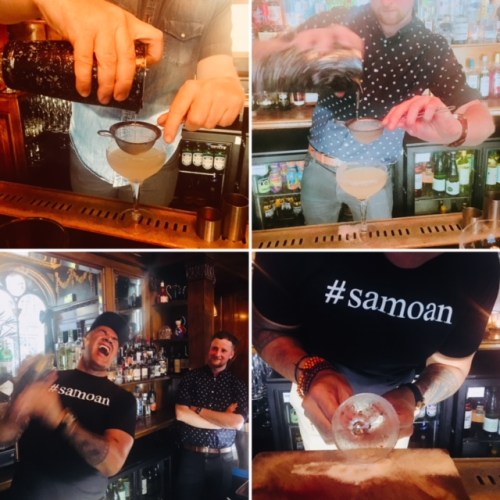 Made using 1/2 shot of agave syrup (12.5ml), 1 shot of lime juice (25ml) and 2 shots of Tequilla, Tommy’s Magarita is served in a salt rimmed glass, which Steven showed us how to perfect, salting only half the rim.   This time it was Isaac who took to the floor and he did a pretty good job of impersonating Tom Cruise with his shaking skills.

Our fourth drink, was the classic Piña Colado. In Voodoo’s version, Liam used a variation on the traditional recipe to make this sweet cocktail made with 1 shot of 3 Year Old Darley’s Rum; 1 shot of Koko Kanu Original Jamaica Rum with Coconut Flavour; 2 1/2 shots of full fat milk; 1 shot of pineapple juice, 1/2 shot of coconut syrup; 1/2 shot of lime juice, it is usually served either blended or shaken with ice. Liam garnished ours with pineapple leaves, three maraschino cherries and some dehydrated pineapple pieces.  The piña colada has been the national drink of Puerto Rico since 1978 and who knew that it’s national day is 10th July.. 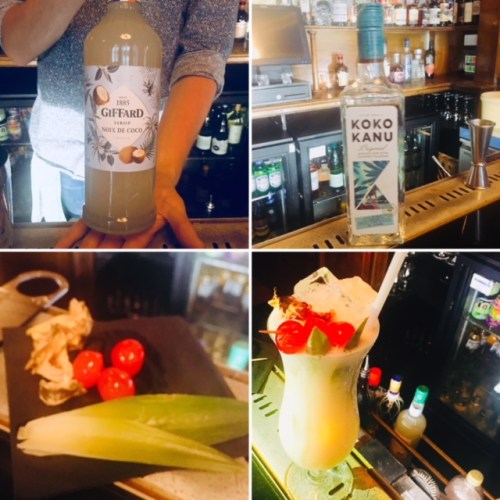 An Espresso Martini – guaranteed to wake me up

Then came the classic Espresso Martini, expertly mixed and served first by Steven and then Derek. It only seemed proper  that Derek should perfect this one, as it happens to be one of the Social Bitches favourite, go to drink on a night out! 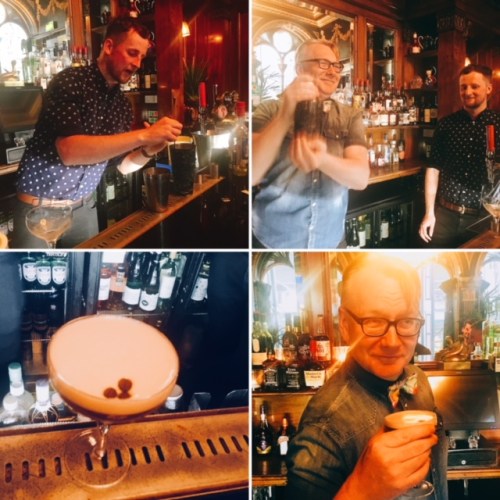 In cocktail terms, the Espresso Martini has a relatively short history with the drink believed to have been first created in 1983 by London bartender Dick Bradsel. According to Dick, a famous model entered the Soho Brasserie where he was working, and asked him to create a drink that would “wake me up”. As there was a coffee machine next to where Dick was serving drinks, he decided to combine the coffee with vodka. Naming it the Vodka Espresso, the original recipe featured vodka, sugar syrup, two types of coffee liqueur and freshly made espresso.

At the time, any cocktail served in a V-shaped glass was known as a martini, so Dick later renamed his drink the Espresso Martini. In 1998, Dick was working at the Pharmacy Bar in Notting Hill so renamed the drink once more to the Pharmaceutical Stimulant. The drink is now known by these three names around the world, with slight variations on the ingredients. 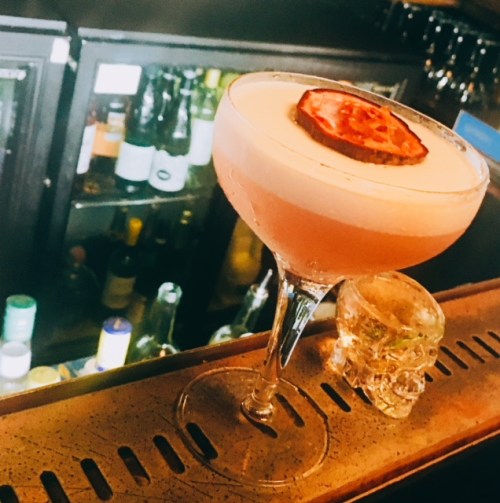 We were really given the star treatment at this event and whilst we may not yet be as slick as Tom Cruise in the 1988 film Cocktail with our shaking skills, I think we can safely say that we may know how to confidently make one or two decent cocktails well and can bore anyone who will listen about the finer historical details of these fabulous drinks. There’s more to just drinking you know!

The Voodoo Cocktail Master Class cost £35 per person for two hours and must be pre-booked and are hosted in the American Bar or Speakeasy at the Voodoo Rooms. The team can host up to 24 at each class, which is exclusive to your group so would be perfect for the sophisticated hen and stag groups (for those with an inquisitive mind rather than those set on getting blind-drunk); corporate groups or just a birthday or anniversary celebration.

Thank you to Rosie, Steven and Liam at the Voodoo Rooms for hosting us.