Differences and Discoveries: Eating in Japan

These days the Japanese are as familiar with pizza as we are with sushi. But at its core, the Japanese approach to consuming food is entirely different to ours; from preparation to presentation, ingredients to utensils – even how you order and pay. And if you’re ready to embrace it, eating in Japan is a delicious adventure. 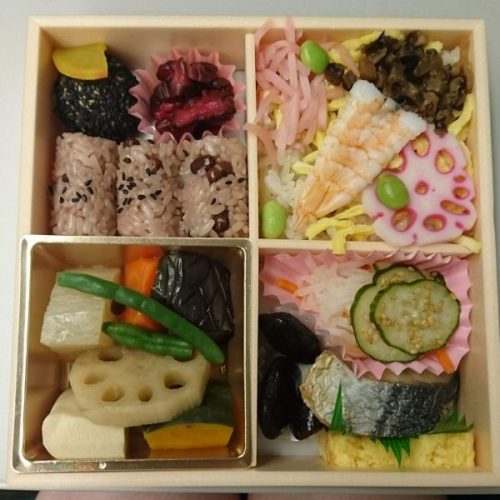 One key difference between restaurants in the UK and Japan is how specific Japanese restaurants are, at every level. They offer one type of food, reflecting the kind of cuisine the chef has specialised in. You won’t find tempura, curry and ramen side by side and menus are short: quality over quantity.

For example, one of the best meals on our recent trip to Japan was at a restaurant that specialised in tempura. Recommended by Edinburgh Foody founder Danielle, Tempura Endo Yasaka in Gion, Kyoto offers three set menus comprising six courses – a culinary journey with a focus on ‘amazingly light yet succulent’ tempura. 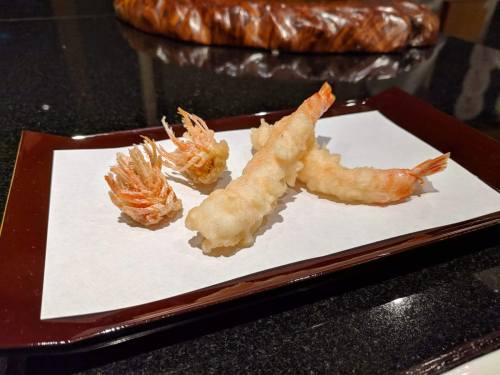 Shrimps and their heads

The highlight was the ‘course’ consisting of a dozen pieces of tempura. Each one was cooked fresh in front of us by one of two chefs, to be eaten consecutively (once cooled!) with the correct condiment: salt, green tea salt or vinegar dipping sauce. We learnt that you add grated radish to the sauce to help it stick to the light batter, and that you don’t mix and match your accompaniments. I found the salt too intense, but the green tea salt delivered a more balanced combination of umami and bitterness.

The tempura itself included a mix of seafood and vegetables. Two prawns each were served with their heads battered separately, producing a crunchy contrast to the soft bodies. Sea urchin wrapped in seaweed was gritty and intense. A small fish served whole was surprisingly palatable. Mushroom, eel, sliced green pepper and mushroom stuffed with minced shrimp were all delicate and flavourful. And throughout, service was elegantly attentive and charmingly unobtrusive. 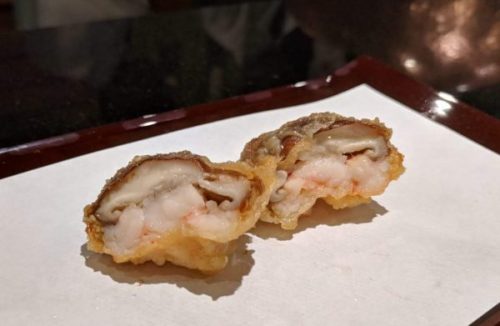 Meanwhile, on the following night in an equally specific restaurant, this time focusing on ramen, service was absent. Instead, we ordered from a vending machine in a small doorway.

Waiterless service may be good for speed (and overheads) but we also found it an enjoyable quirk of Japanese efficiency – even it doesn’t overcome the language barrier. Meals are ordered before you sit down by selecting one of the choices written on the many buttons. (English option not guaranteed.) In exchange for payment, the machine spits out tickets, which you give to the chef as you sit down. Cooking behind an open bar, he or she will you pass over your meal when it’s ready. And unlike in Britain, this sort of fast food still carries an air of respect for the chef, the meal and the diner. 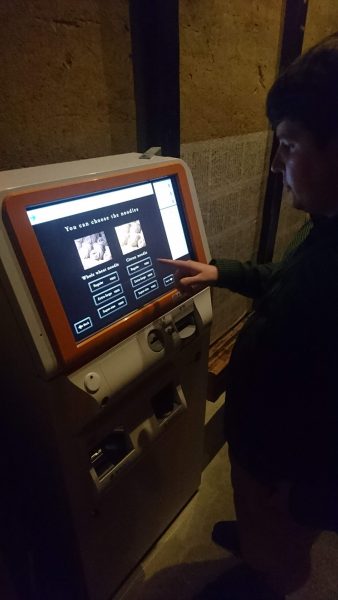 Ebiken are another good example of this. A sort of bento box for train travel, their healthy contents have an aesthetic appeal that would put any Ginster’s pasty on the East Coast service to shame. Before boarding our trains, we would go to a dedicated ebiken shop in the station to choose from numerous colourful faux-wood boxes.

Ebiken illustrate the importance of presentation in Japanese food, with each box’s selection balanced across colour, texture and flavour to create a satisfying meal. Divided into sections containing rice, salted fish, pickles, steamed vegetables, tofu and eggs, many items have a sweet or tangy flavour and all are intended to be enjoyed slightly chilled or at room temperature. Ideal. 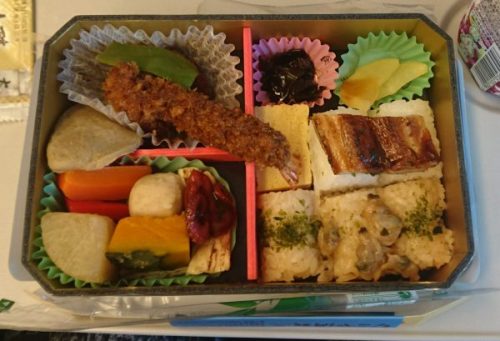 However many times you travel to Japan, what you eat that will amaze and delight. Previously we had discovered tsukemen, a type of ramen where the noodles and broth come separately, and the broth is a strong dipping sauce. At the end of the meal, hot water is added to the sauce and it’s drunk like soup. I wondered what new things we would try on this trip. I particularly enjoyed my first experience of ochazuke: rice topped with flaked salmon, shredded nori and puffed rice. Over everything you pour green tea, to create a tea-rice soup. The savoury tea adds a gentle flavour to the rice, with the stronger tasting fish cutting through. Definitely one I’ll be trying at home. 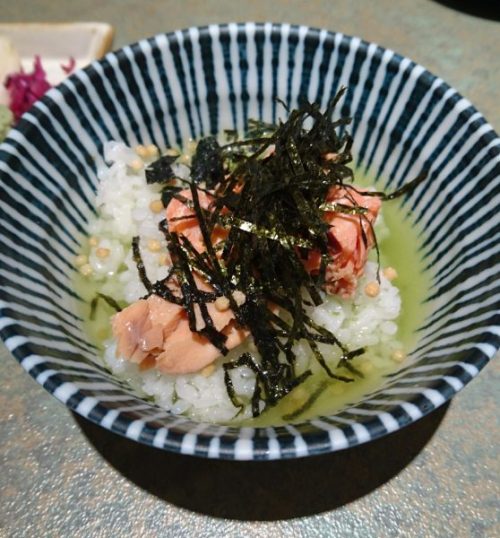 Not everything we ate was sophisticated. For example, Kushikatsu is a dish native to Osaka that we tried in neighboring Kobe. It essentially translates as ‘fried things on sticks’ (kushi = skewer, katsu = deep-fried) with different skewered foods fried in a fine breadcrumb coating. This included asparagus, cheese, egg, beef, salmon, pumpkin and weiner sausage – all served with yellow mustard! Who can argue with those combinations? 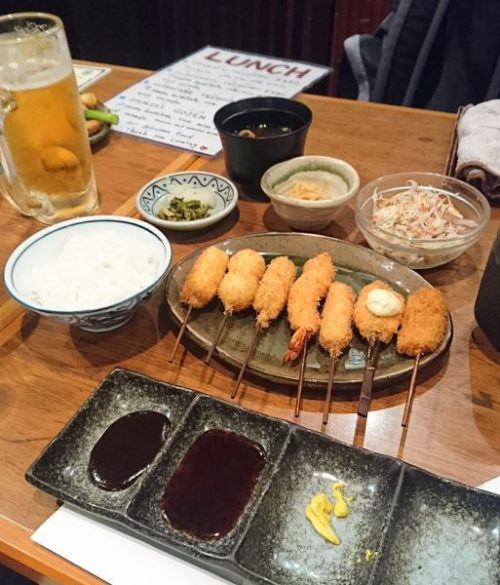 One combination I have questioned in the past is takoyaki. A pancake made with octopus, cabbage and ginger, served with a Worcestershire-like sauce, mayonnaise and nori, it’s chewy and tangy. Whilst it wouldn’t be a first choice again, it was a satisfying street food experience with a mix of textures and plenty of flavourful sauce. (Although those spheres did not make for clean eating!) 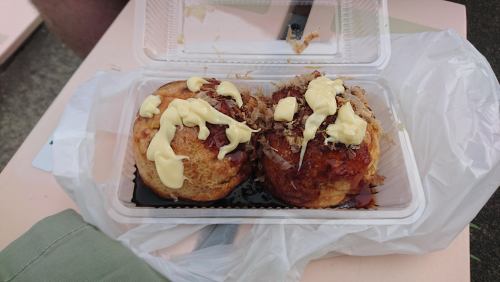 A totally new one on us was natto. Introduced to us by family friends, it came in maki sushi rolls described as comfort food. A pale brown paste of fermented beans, it immediately tasted exactly like instant coffee to us – a hilarious and unlikely comparison for our Japanese friends.

In our three weeks in Japan, we only ate one thing that we found truly inedible. Even the slimey, starchy gloop often served over fish was more palatable than the turban shell sashimi we tried. Thin slices of white cartilage, it had a most bizarre bite at the end, a crunch almost, and a very bitter aftertaste. Pass. 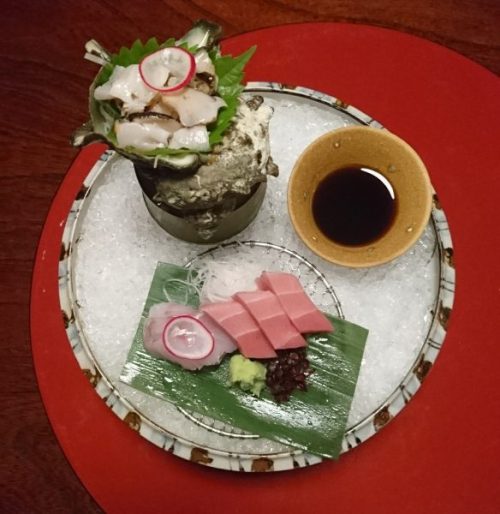 Anyway, I could go on – about the cooking class and its omlettes, about my new mantra “what will we eat with rice today?”, about ‘kappa-bashi’ cookware street in Tokyo – but this blog is long enough. Perhaps another day, or in person. Until then, I highly recommend a trip to Japan and encourage you to be brave with what you eat, wherever you are – we ate a lot of delicious things unrecognisable to Western eyes before we spat out that turban shell sashimi!