No foodie will want to miss the screening of Chef’s Diaries: Scotland on Saturday, 5th October 2019, which sees the renowned and ‘ever-hip’ Roca brothers (Joan, Jordi and Josef), travel around Scotland discovering the cuisine of this country. 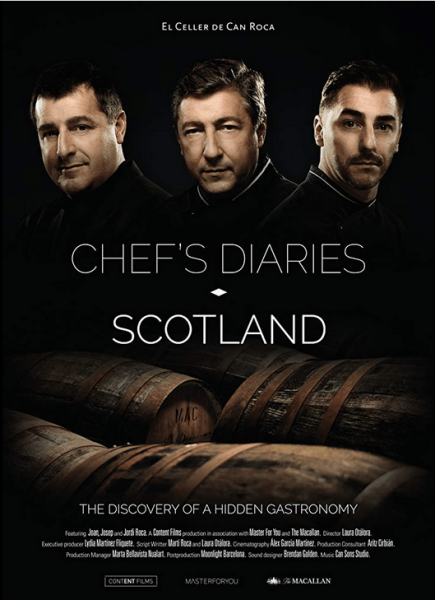 I’ve been lucky enough to experience the magic of one of the Roca brothers, Joan, back in October 2017, when Estrella Damm treated food writers and bloggers to a gastronomic experience at Colstoun House.

However, for those not familiar with the Roca Brothers, they are behind the 3 Michelin starred El Celler de Can Roca in Girona, near Barcelona.   The film sees them take on new challenges and their surprise at discovering more about this ‘raw diamond’.

Following the screening the audience will enjoy tapas created by chef Michael Innes who has worked with the Roca brothers at El Celler de Can Roca.

The 2019 Edinburgh Spanish Film Festival presents a total of 17 feature films and 8 short films in Spanish over the months of October and November.

Don’t miss out, get your tickets now. www.edinburghspanishfilmfestival.com