The Broughton – rising from the ashes of The Phoenix

The family that runs The West Room in Edinburgh’s West End, and the Seafood REstaurant in St Andrews, has opened a new restaurant and bar in Edinburgh: The Broughton. The unit was once The Phoenix, a place I’ve never been to, partly because it had a bit of a reputation (by which I probably mean it was open late). Now, this two-level unit is a rather cosy and elegant bar and restaurant. Christopher and I visited last week. 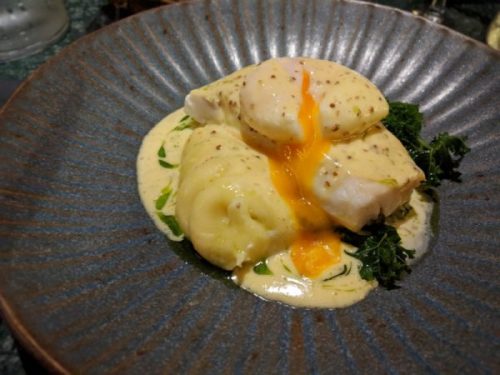 It was a quiet Wednesday in November (a month when Wednesdays are quiet) when we visited. The Broughton is busy at the weekend and their Sunday roast is popular already. The bar was doing decent business despite being mid-week.

We got a table for two with a good view of the room and settled in to comfortable chairs, resting our elbows on the glossy, green stone table top. We picked a bottle of picpoul de pinet (which turns out to be one of their most popular grape, along with the pinot grigio) and settled into choosing from the menu.

At first I was going to have the fish cake to compare it to one I had recently that didn’t impress me but after playing with the idea of ham hock terrine, I decided to go with the soy and ginger cured salmon instead. It was soft and salty and fresh and delicious. 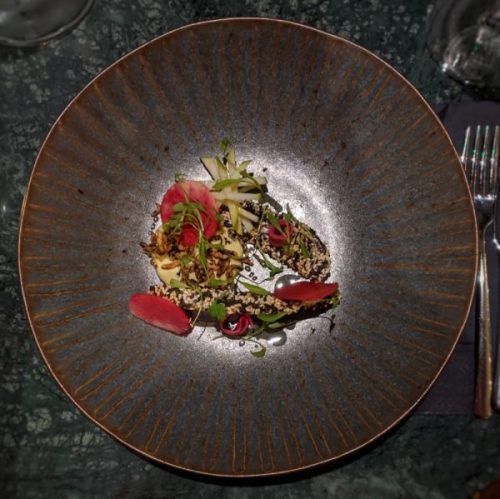 Christopher started with the Cheddar hash brown which was a lot more elegant but just as soothing as it sounds. Crispy on the outside it still had texture on the inside. 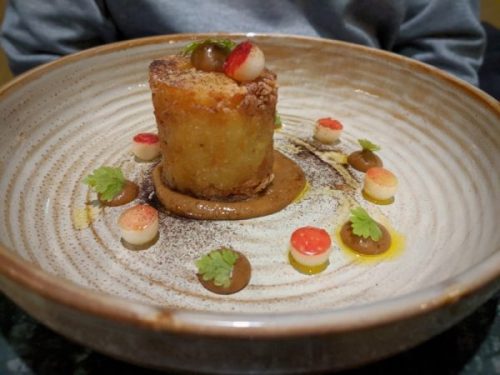 Elegant and soothing: it’s the cheddar hash brown. A very popular dish, and I understand why.

We also had the sourdough with whipped butter – such a treat for people who tend not to have butter at home. I love good bread and butter.

For mains, I was torn between the lamb rump and the smoked haddock. The latter won: it was served on the silkiest crushed potatoes I’ve ever had, a poached egg balanced on top and and a creamy mustard sauce.

Christopher had the wild mushroom risotto (minus egg and parmesan). We had a conversation about taking things off a dish, the two of us. The chef puts something together that’s balanced and just-so. Then you go, yeah, but can you take this or that off. Of course it changes the dish. And if you take a poached egg off, you’re removing a lot of creamy delishiousnes. I think you should take the dish as it is, if possible, but if uncooked egg makes you ill, and you like risotto, what do you do? 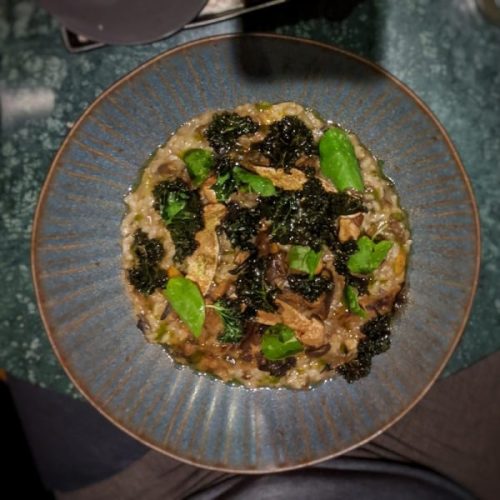 Mushroom risotto – imagine a poached egg on top. Also imagine there isn’t a phone shadow at the top of the plate. Please.

I went for the blackberry Pavlova which was elegant, cool and fruity. There’s something about meringue, cream and fruit that just works. 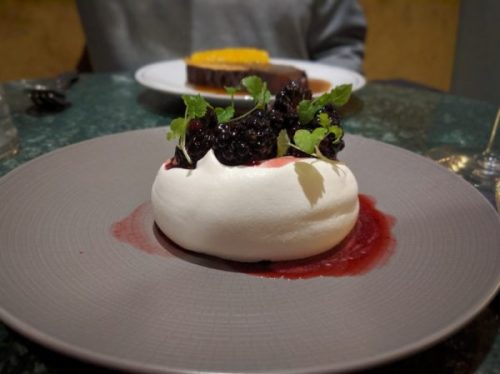 Blackberry Pavlova in front – yes, that’s mine, thank you – and sticky toffee pudding (sans ice cream) in the back.

We rounded off our very pleasant meal with a cocktail – mine’s a dry Manhattan, please – and relaxed before setting off out into the cold night. We had a lovely night and were so well looked after by Darius and his team. The food was lovely, the service was friendly, and we felt ever so welcome. I’ll be back! (I have already booked a table.)

Caroline and Christopher dined at The Broughton’s invitation.