Self-styled ‘future farmers’ The Free Company are based out in Balerno, where they run fantastic supper clubs offering seasonal set menus. They’ve been established since 2017, but I first heard of them the other week. Where have I been! 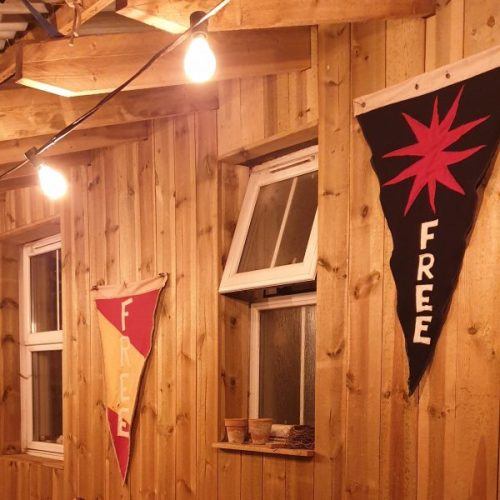 Back to their roots

Each ‘series’ of dinners runs for two months, three times a year, with guests invited to pay what they think the meal of homegrown organic produce is worth. It’s no surprise that the food is excellent quality, as the young collective focuses on ‘holistic regenerative agriculture.’

While this may sound like a zombie apocalypse survival strategy, in reality it means a ‘no-dig’ approach to permaculture. They instead rely on the relationships between their animals and their garden vegetables to reduce their carbon footprint. Pretty cool stuff. 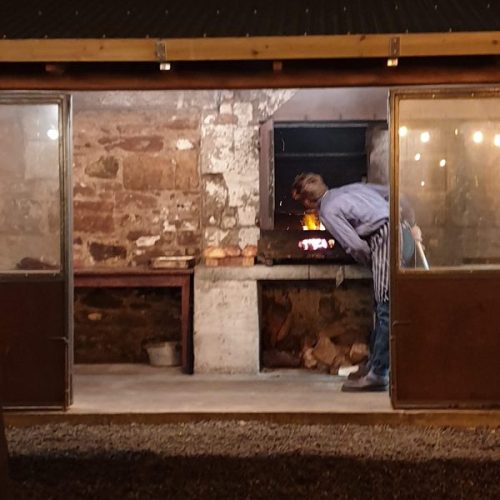 Baking bread at The Free Company

Last week we went along on a recommendation to their winter dinner series. Arriving on a dark, wet night to the glow of fairy lights and a fire in the centre of the courtyard, we were given a warm welcome from host Angus. Ushered into the toasty bar, we were impressed to find Escuabac and tonic, and Black Isle Organic on draft. Drinks have set prices, but you can keep a tab until the end of the night.

Soon, canapes were brought round. As I told the chef on the night, I think my first and last mouthfuls were the finest of the evening. The first was an umami explosion: a square of doughy focaccia, fried in rendered pork, was topped with mushroom duxelle and fine shavings of St Andrew’s cheddar. The fat-soaked bread had retained a slight crunch at its crusty edges and the rich, savoury mushrooms matched its ooze, before the final punch from a tang of cheese. 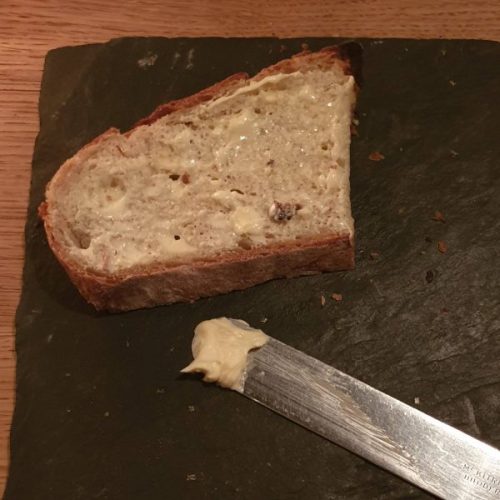 Moving upstairs to the long dining room, we were seated by our hosts at one of two communal tables made by an East Lothian furniture maker, Honors. We were served a slice of freshly baked bread and honey butter, which is one of the most delicious things I’ve ever eaten. The pale whipped butter had distinct honey notes but it wasn’t overwhelming or sweet; it was heavenly. Once my fellow diners had taken their share, I had no shame in slathering my slice with every ounce that remained.

The first full course that followed was different for meat eaters and vegetarians. As the veggie, I had beetroot four ways. Several thick slices had been roasted until soft and juicy and were beautifully arranged. In amongst were thin slivers, which were pickled, fermented and raw. Dotted in between were linseed crackers, a tiny slice of cheese and a garlicky salsa verde. 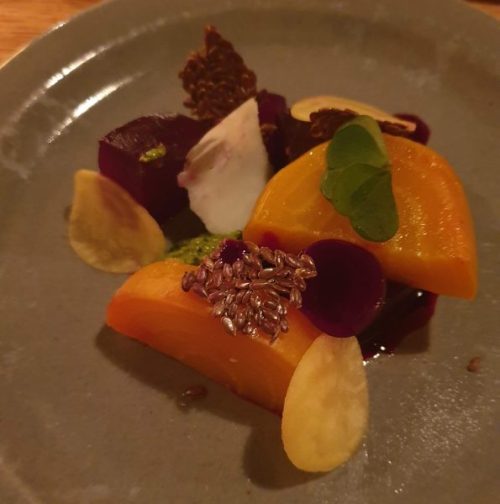 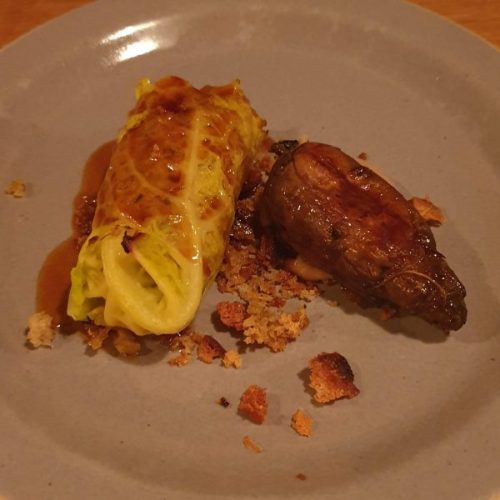 Even the pigs are homegrown

Next, we both enjoyed a combination about which I was very excited: leeks, apples and cheese. The leeks, one of my favourite vegetables, were soft and fleshy, with a firm charred skin. They were topped with home-smoked ricotta and fine shavings of salty Parmesan. It was very satisfying. 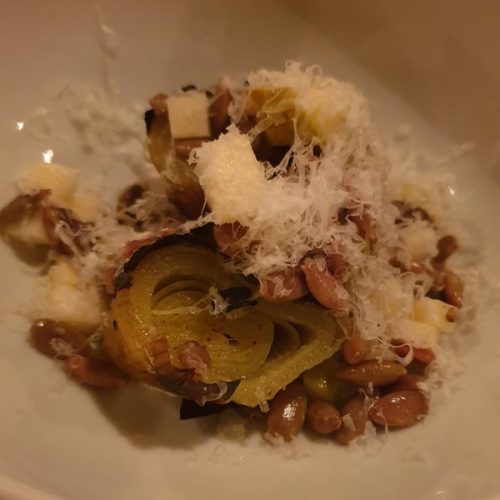 The third course was a fine piece of pork belly for Raymond, from the farm’s own hand-reared pig club. It came with a piece of thick, salty crackling that gave a hearty ‘snap’ under pressure. Raymond raved about the accompanying turnip gratin, too. 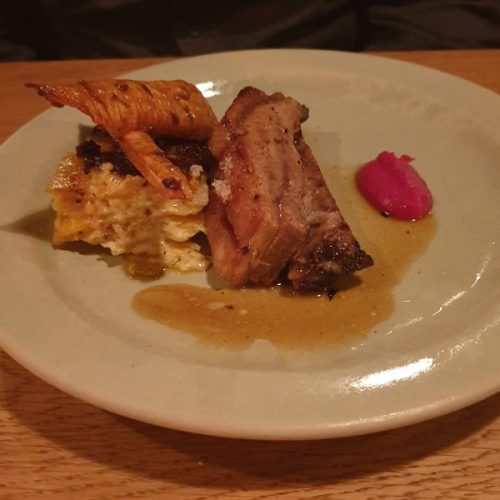 For me, a slab of celeriac had been roasted in butter. It was well-cooked, soft but not mushy, and very flavourful. I was less of a fan of the handful of hazelnuts, as they slipped everywhere – I would have preferred a crumb – but a sweet cracker made of sunflower seeds provided a complementary texture, whilst piped goats cheese made for a sharper pairing. 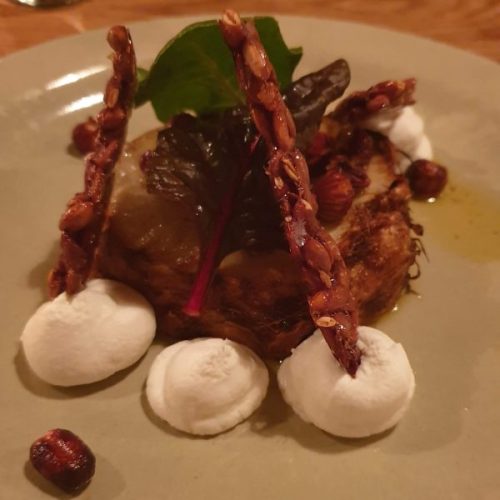 To finish, we had a marvellous pear clafoutis; all of the joy of a pie, with none of the dryness of pastry. The clafoutis was drizzled with berry syrup and a dollop of creme fraiche pooled beside it. On top, crunchy sugar chunks were a great contrast to the softness of the flan. But the pears were undeniably the star of the show; more than sweet, they were delicately fragrant. It all came together to make a well-rounded mouthful, and my second favourite of the night. Bookends. 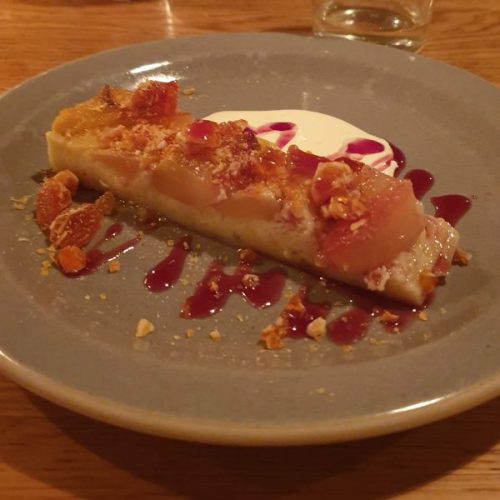 Whilst we didn’t chat to our neighbours, from whom we were just a little far apart, the communal dining room was a surprisingly cosy space. Throughout the night, the team were hospitable and provided great service. So we look forward to returning in the spring, and in the meantime, making sure everyone is better informed than I was about The Free Company.