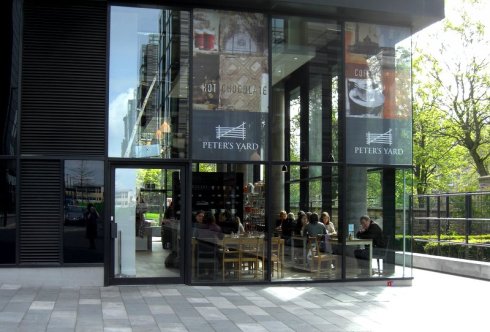 For those of you based in Edinburgh, you’ll have probably come across Peter’s Yard Cafe and Bakery when walking through the Meadows or coming through the new Quarter mile development. It’s a sleek glass building with a distinctly Swedish feel to it. Inside, there is plenty of wood, comfortable seating and a relaxed atmosphere. Peter’s Yard opened in 2007 and its reputation grows with every month. Just recently, master baker Dan Leppard writing in the Times, placed the bakery in the top 10 of small bakeries in Britain.  I was keen to find out more. 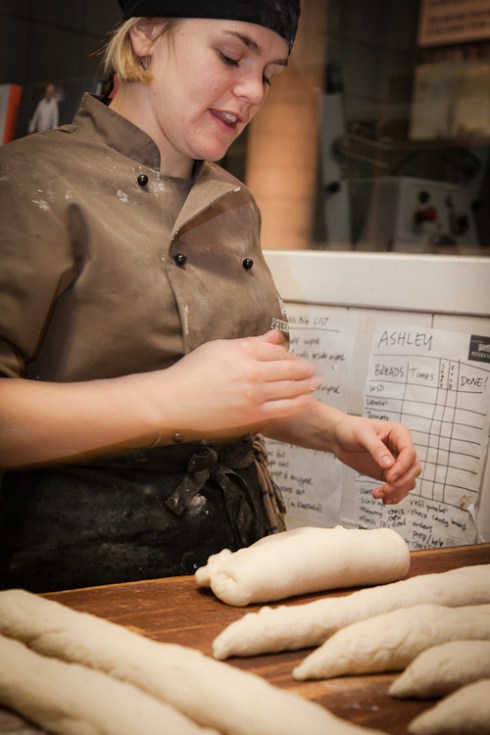 One morning recently, I arrived at 7 am to watch head baker Georgie Crisp at work. Georgie is passionate about what she does. She admits that getting in to work at 4 am does rather affect her social life, but being head baker more than makes up for it – it is simply her dream job. After completing a general catering course, she started to explore breadmaking. On a two-week stage with Mark Lazenby at Cinnamon Twist in Helmsley, she realised she had found her passion.

Much of bread making is in the preparation, you need to plan and make ahead. Georgie has several different sour dough “mothers” in unprepossessing buckets ready to add to the bread flour. Each need careful feeding each day to ensure it keeps alive.  Sour dough starters are used in all the rye-based recipes. For other breads including baguettes, fresh yeast is used. The baguette dough is made 12 hours before it is needed and placed into a special proving cabinet to gently grow over night.

There is a large French-made cooker with different ovens set at pre-programmed, tried and tested temperatures ready to accommodate a particular recipe. The bread is steamed as it cooks helping a good crust form – Georgie leaves the door of the oven open for a few minutes at the end of the baguettes’ cooking time to make it just that bit crisper. I was very taken with the special “roller blanket” which ensures you can deftly put your bread into the oven without using a peel. 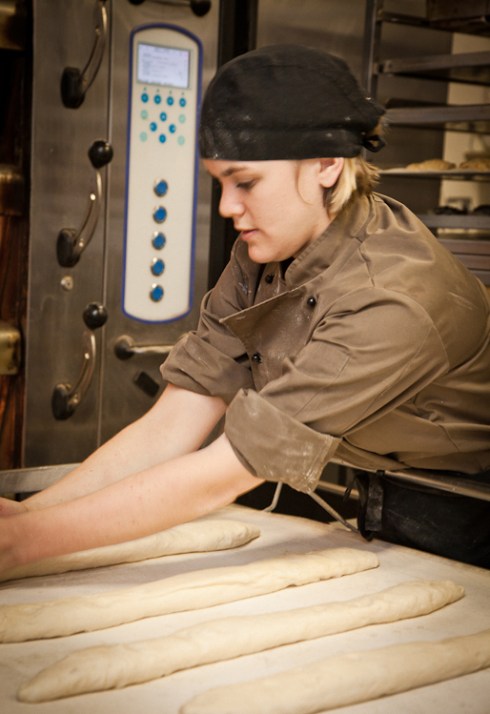 Placing the baguettes on the roller blanket

In short time that I am in the kitchen, Georgie makes baguettes, foccacia, sweet buns with vanilla filling, cardamom buns and pizza dough and up until 2pm she will make an amazing range of items  including crispbreads (now those you can order online). 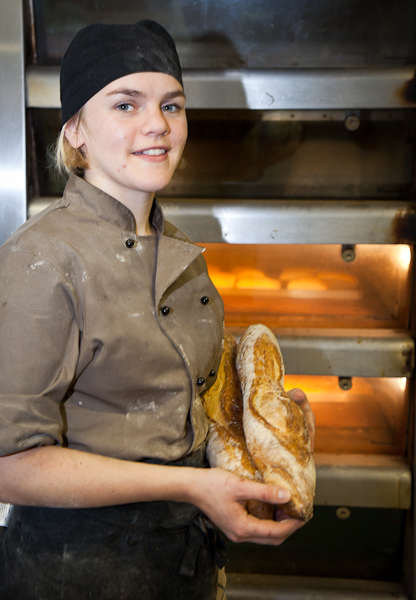 George and I agree that baking is magical.

Georgie is certainly a magician and Peter’s Yard probably the best bakery in Edinburgh. Visit soon won’t you? And please leave me at least one bun …

The best seller, and my personal favourite, is the cardamom bun. For me, cardamom is the spice that really sums up Swedish cooking  and in this recipe it is the star ingredient. It’s a long, tricky process to make the bun. A basic dough is made and left to rest,  butter, sugar and spice is added and kneaded again. The dough is folded and  threaded through a machine (rather like a laundry press) to make it thinner and thinner, and is folded and thread through again. A filling of cinnamon, butter, treacle and syrup is spread over the dough. Then Georgie cuts it into strips each weighing 85 grammes and deftly twists the pieces before being rolled into a spiral. After another short rest period, they’re baked. 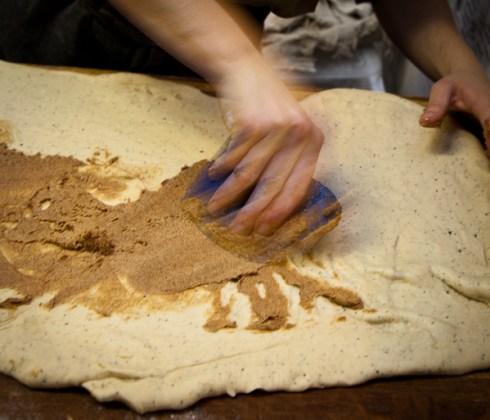 Spreading the filling on the cardamom dough 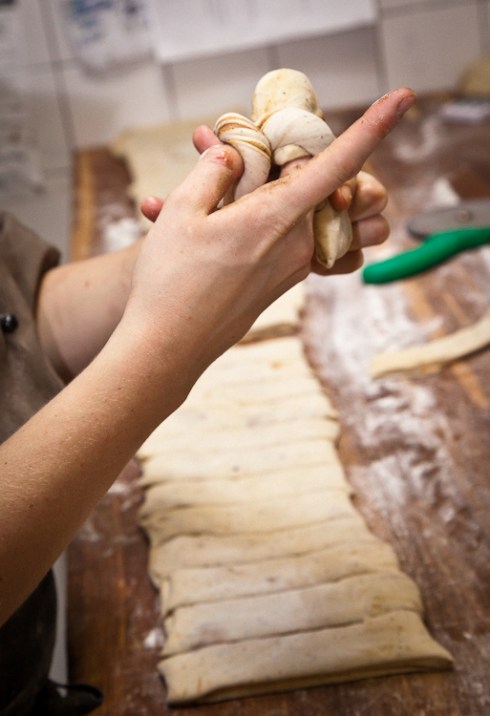 Twisting the dough into shape 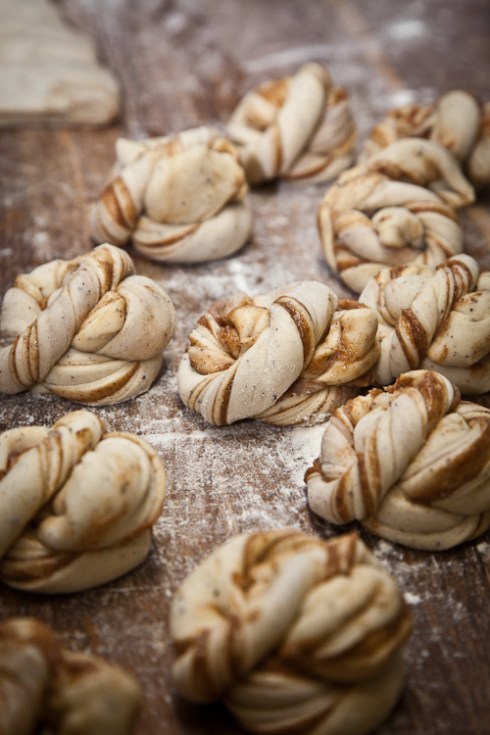 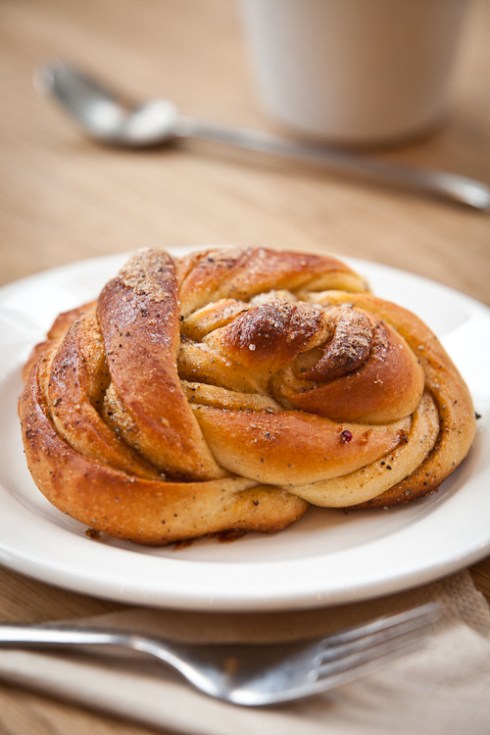 Photographs by Brendan MacNeill except exterior shot. A very big thank you for Peter’s Yard inviting me into the kitchen.

Check out other artisan bakeries in Edinburgh.