Imagine learning to cook, hot, spicy Indonesian food at 40 degrees centigrade. It happened to me in Manila, capital of the Philippines.

Alas, I’ve not been on an exotic vacation, just a trip down memory lane. I’ve just discovered a cutting from the “Daily Telegraph and Morning Post”, dated 25 July 1962. The author, Jacqueline Rose met up with television cook Pete Alfonso to learn how to make a genuine Indonesian dish. A television cook in 1962?

A little more delving leads me to more information about Mr Alfonso. He was a charismatic Dutch-Indonesian who ran Cafe Indonesia well known for jazz and good food. 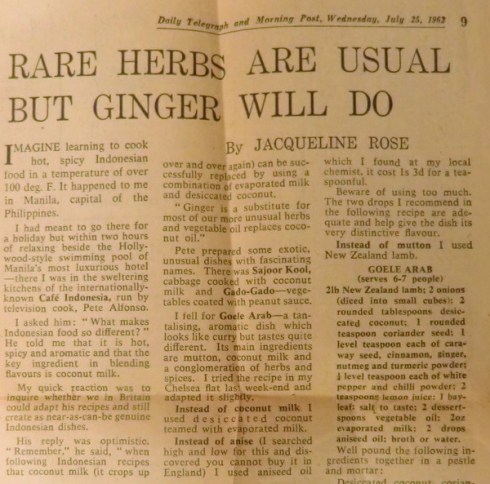 Easy to relate to a cookery course in a far-flung place perhaps, but reading on, you realise just how far along the culinary road we have come and how we take ingredients  for granted.

Pete explains that Indonesian food is hot, spicy and aromatic and the key ingredient in blending favour is coconut milk. “This can be successfully replaced by using a combination of evaporated milk and desiccated coconut. Ginger is a substitute for most of our more unusual herbs and vegetable oil replaces coconut oil”

Back in her Chelsea kitchen Jacqueline attempts a recipe called Goele Arab and explains “I searched high and low for anise and discovered you cannot buy it in England. I used aniseed oil which I found at my local chemist. It cost 1 shilling and 3 pence for a teaspoonful” Luckily she warns against using too much – just a couple of drops as it gives it a very distinctive flavour – I bet! She uses the recommended evaporated milk and desiccated coconut mixture and New Zealand lamb rather than mutton(!).

In the clipping, the recipe she cooked is called goele arab. I think this is probably gulai arab – a sumatran style stew. I found a modern alternative. Interesting too to note that Jacqueline included just a 1/4 teaspoon of chili – not very hot and spicy!