Norman Musa is a determined man. His mission is to get thousands of people cooking Malaysian food before the summer is out. 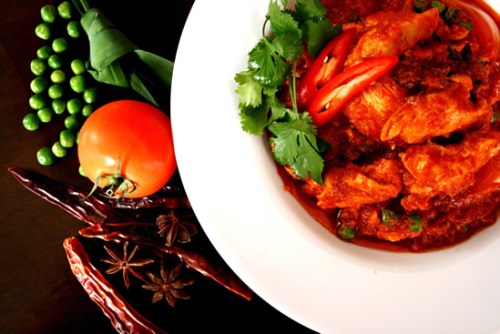 I had a chat with Norman just as he was set to take part in the Malaysian Food Festival in London, just a stones’ throw from the Olympic Stadium. Here the Malaysian team will be feeding at least 500 people a day over 9 days.  Including a stop in Edinburgh, he’s spending the summer giving demonstrations and masterclasses at festivals all over the country.

I am not that familiar with Malaysian food. Listening to Norman explain what his native country is like and how the food the food looks and tastes was inspiring. It sounds mouthwatering: exotic, colourful and full of flavour. It’s a cuisine that deftly combines Asian, Arabian and European cooking with influences from Portuguese, Arab, Indian, Chinese, Thai and Indonesian cooking. I’m really looking forward to getting to know it better.

Norman’s focus is Nonya food. This is closest to Thai food with spices, coconut and chillies a feature. Oh, and lemon grass. Here in our conversation digressed a little as I just had to add that my cat always nibbles the lemon grass plants I have in my greenhouse. Norman was so taken with this that my cat Henry will feature on his Facebook wall.

I was lucky enough to take part in his masterclass  Foodies Festival in Edinburgh supported by Supported by MATRADE, Malaysia’s trade promotion agency & Malaysia Kitchen. 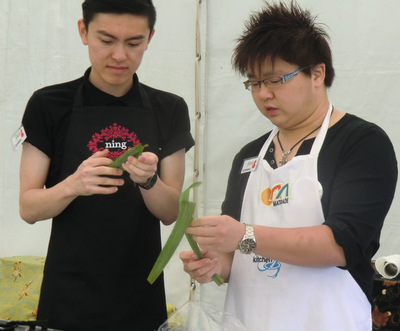 Twenty or so eager participants were welcomed into the Malaysian tent to find all small gas stoves, utensils and ingredients set out for us. Norman explained how we were going to cook. Roti Jala which are delicate savoury pancakes traditionally served during Ramadan and Gulai, a Malay Chicken Curry, with ginger, spices, coconut and tamarind. We were introduced to the ingredients including pandan leaf which give the curry its own unique flavour.

Norman is a natural teacher, and everyone seemed very eager and confident they could cook the curry and pancakes. I have to say I was so absorbed in my cooking that I wasn’t taking too much notice of the rest of the class but a quick glance showed how much fun they were having. To make the pancakes you need a gadget which is rather like a plastic cow’s udder in shape – the nozzles let the mixture drip through slowly, you then have to “just” swirl the mixture onto the hot pan! 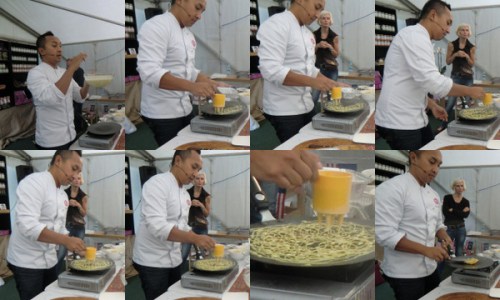 How to make Malaysian Pancakes

How Norman got started

Born and brought up in Butterworth, Penang, Norman is the Executive Chef of Ning restaurant in Manchester. He came to the UK in 1994 to train as a quantity surveyor at the University of Portsmouth and despite his family having a restaurant and food stall he found was rather lacking in cooking skills. Luckily his mother was on hand to walk him through dishes on the phone (the phone bills must have been interesting!).

After graduating he worked as a Quantity Surveyor and continued his new found passion for cooking and dreamt of running a restaurant. In 2003 Norman moved Manchester and the dream became a reality and he set up Ning Retaurant and soon after a series of Cookery Courses.

He’s visiting many other festivals over the summer, check out his website for details. I hope you get to take part in a masterclass too! 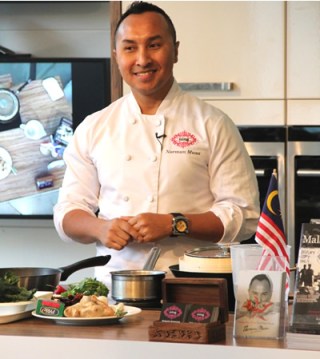 Thanks to Norman Musa and Andy Spracklen for the photographs in this post  ©normanmusa. The pancake demo and pandan folding pictures were taken by Edinburgh Foody.