Blythe of Lunchquest send me a message. “Had I heard about Restaurant Day?” I had not. I looked at their webpage and discovered that it is a”food carnival created by thousands of people organizing and visiting one-day restaurants worldwide”. Blythe issued me a challenge. “Why don’t you do something? I’ll be taking over Giovanni’s with two of the Total Food Geeks”.

And so it began. 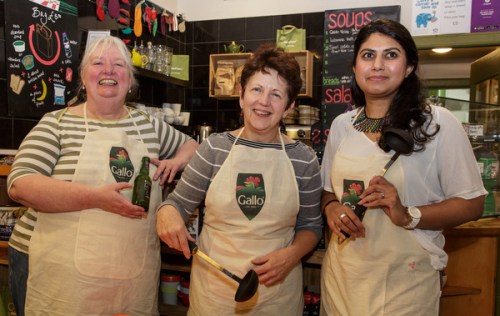 Coming up with an idea isn’t always easy 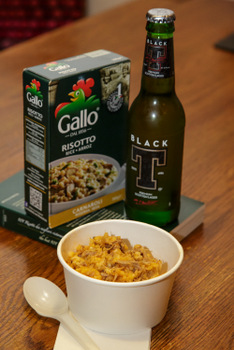 Having agreed to do something without thinking it through was perhaps not wise. Would I be able to host people at home? If not, where? What could I serve?

It wasn’t until I was invited to a Risotto Masterclass organised by Gallo Rice at the Edinburgh New Town Cook school, that an idea began to form. Chef Mattia Camorani from GBV (formerly Hotel Missoni) showed us how to make three different risottos: turkey ragout, pumpkin and sage and mushroom. I don’t know whether you consider risotto difficult or easy to make? Here we learnt many tips. The larger the pan the better so that the rice cooks evenly; don’t add garlic it can overpower the ingredients and even it is not necessary to stir the risotto the whole time. I include one of his recipes below for you to try.

I cheekily asked Jason Morrison, MD of Gallo in the UK whether he would consider providing the rice for a Restaurant Day pop up. The response was enthusiastic. So it would be a risotto pop up!

Who would let us take over for the night?

A few years ago, Graham and I spent the most wonderful evening in Belfast at an event where 2 bloggers took over the kitchen and provided a sublime meal. It is only now that I realise just how much work that they must have put into it! Michael Deane, well-known restaurateur kindly offered one of his kitchens. Who could we possibly ask in Edinburgh?

There’s a very special cafe in Edinburgh called Union of Genius. This is a soup cafe, nicely located not far from the Meadows and the Museums of Scotland.  Union of Genius has been very dear to us ever since we were part of the Kickstarter project to raise funds to establish their commercial kitchen. I approached Elaine who said yes immediately “I think its a wonderful idea”. Not only that, we would be able to use the pots, cutlery and glasses they use made by Vegware.

The cafe is small, but I confidently thought “We’ll fit 20 people in, no problem! 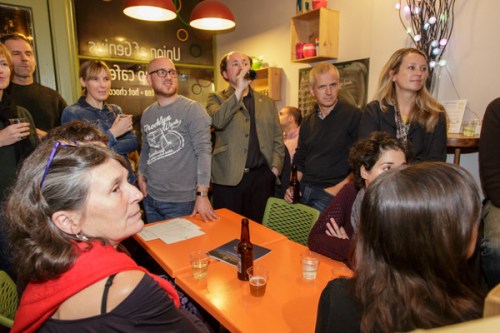 I seem to have a captive audience!

I’m not quite sure now how I persuaded our able helpers. But soon, Lea, Meena and Brendan promised to help and of course, Mr EF himself didn’t really have any choice. We decided that any proceeds would go to charity, and what better one than the Trussell Trust who partner with churches and communities to open new foodbanks nationwide? With over 420 foodbanks currently launched, their goal is for every town to have one.

With that in mind, we approached some more companies to see whether they would help. Drinks were provided by Tennents Lager – their new Black T lager and Ammoun Voyages who created wonderful holidays donated some beer they had created to launch their new company. Eat Fish who provide fish on subscription sent us some Orkney Scallops. The duck was provided by Gressingham Duck. I recently had the chance to try out some recipes with their produce and still had a whole duck in the freezer. 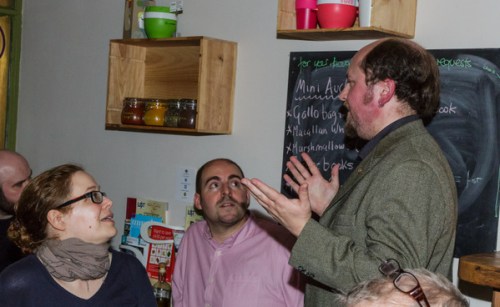 Watch out Caroline, Blythe might be lining you up for another challenge

How long it really takes to cook a risotto

I can quite believe that a risotto takes 16 minutes from start to finish. But, there’s quite a bit of preparation that needs to be done before you get to that. 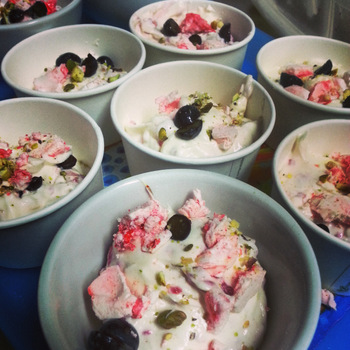 Onions take a long time to cook down

Mattia instructed us to chop the onion small, not much larger than the rice grain. Even so, cooking the onion for 20 people slowly so it would soften without colouring seemed to take an extraordinary length of time. But, this really is the key to a good risotto.

Its the stock that makes all the difference

I made both duck and vegetable stock earlier in the week and froze it to use on the day. Everything was ready to go. However, despite having left the stock to thaw, they were still blocks of ice. Now what? Judicious use of the microwave and heating in a saucepan got us back on track.

Use the largest saucepan you can

Chef Mattia’s words came to haunt me. Unless I had a wide paella pan, I wasn’t going to be able to cook for 20 people in a shallow layer. Suffice to say, we had to use what we had, stirring all the while to avoid the mixture getting stuck.

Finally it all came together, and packing it into a specially insulated box, we head for Union of Genius, about half an hour later than we said we’d be. Bruce was waiting for us.

Are we really going to fit everyone in?

The next hour was a blur as we learnt how the soup kettles work, found out where everything was and sorted out drinks. The outside tables were brought into the cafe and we realised just how tight it was going to be. Hopefully, our guests would understand? They were certainly going to get to know each other well. We discussed timings, and the items for the auction and soon the guests started to arrive.

Drinks distributed, I started serving the risotto, pots were distributed hand by hand to ensure everyone got what they ordered. A little calm descended. Was it quiet because they liked it or not? Graham busied himself in the kitchen preparing the scallops, then Meena worked on the dessert. Seconds of the risotto were soon requested – it must be alright then!

Our mini auction of foodie items raised additional funds for the Trussell Trust before our guests tucked into Meena’s “Leith Mess” a creamy, rose scented dessert with meringues and raspberries. 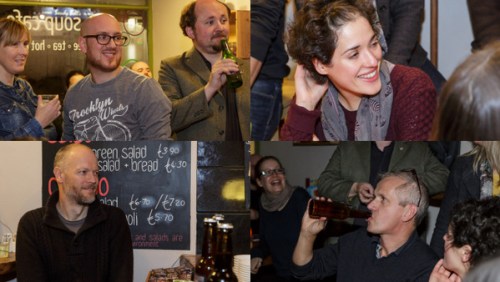 The smiles say it all

What’s in it for me?

It was such fun. I applied my new planning and organisational skills learnt on my professional baking course in a different setting. Granted we left the kitchen at home in disarray, but I’ll just ignore that!

Astonishingly, there were only 5 pop ups in Scotland for Restaurant day, and even fewer in England. Why not have a go yourself, the next Restaurant Day, it is such fun! 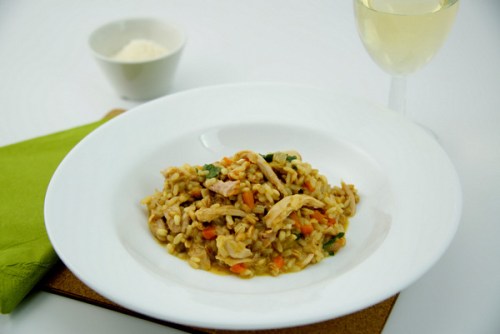 To all our supporters, we could not have done it without you. We raised £350 for the Trussell Trust.