The Sheep Heid Inn has a long and illustrious history. It’s one of the oldest pubs in Scotland (the oldest, maybe), it has a skittles alley and a beer garden. It is nestled in the village of Duddingston, in the shadow of Arthur’s Seat. It’s been there for a long time (651 years!) and is a well-known Edinburgh attraction. There’s beer, there’s food, there are charming surroundings.

When I went last Monday to look at the new menu, I hadn’t visited for years. Why hadn’t I been? Partly because I’m not over on that side of town often. But also because my memory of the Sheep Heid Inn was of a run-down, very pubby pub. A lot has changed since I was last there, and not just the menu. 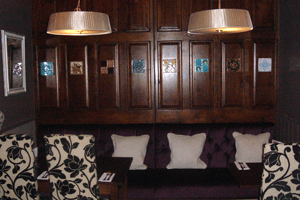 The upstairs restaurant is comfortable and inviting.

The Sheep Heid Inn had a complete re-fit in November 2011. The new decor is neutral and comfortable. The upstairs dining room is inviting and warm. During the week, most people choose to eat downstairs where there’s a really nice little room between the bar and the skittles alley. (Yes. The skittles alley is a very good reason to go to The Sheep Heid Inn. Have a drink, a bowl of chips and throw those wooden balls down the skittle lane. If you’re lucky, you’ll hit some skittles.) 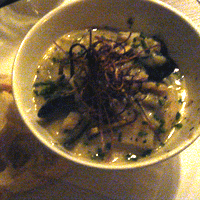 The perfect dish if you're hungry or looking for comfort.

I started one of the kitchen’s very special specials: Cy’s cullen skink. It was good! Filling, smokey, delightfully peppery and finished off with mussels in the shell and crispy leeks. It was the perfect soothing dish and I’m not surprised it is one of the dishes they sometimes offer as a special snack-bowl in the bar. I’d have it every time. I blame the fact that I was too full to have pudding on the skink’s greatness. But don’t worry – I had a thorough look at the dessert menu and will talk about that later.

The Sheep Heid Inn is owned by a chain – Mitchells & Butlers – but the individual restaurants are given quite a lot of autonomy. The Sheep Heid Inn is a local pub that serves neighbours and visitors alike. Because it’s so close to Athur’s Seat, it gets a lot of visitors at the weekend: walkers come for lunch and families drive over at the weekend. They are so busy at the weekend that if you want to visit, you’re best booking a table. On a Sunday the kitchen serves a Sunday roast with all the trimmings. Book a couple of days in advance to make sure you reserve a spot.

In the summer, they have plans for the barbecue in the beer garden and events and festivals will start this spring. The Sheep Heid Inn Beer Festival will not stop just because the management changed. A local restaurant/pub like this needs to strike a balance between new and traditional. Follow them on Facebook and Twitter to stay up to date with the latest specials and events. 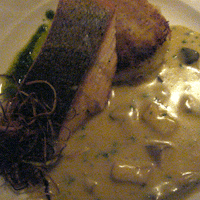 A generous salmon fillet with bubble and squeek, wild mushroom sauce and a touch of basil oil.

For my main, I had salmon with bubble and squeak and a mushroom sauce. I was quite intrigued by the sea bass on the specials menu, but stuck with the salmon. It was generous and tasty and more than I could finish. The specials on the day that I was there included pan fried sea trout on sauteed wild mushrooms and a Parmesan encrusted white bean and pancetta cassoulet, veggie and non-veggie haggis, neeps and tatties with a brandy pepper sauce and crispy duck breast with confit duck and celeriac lasange. Rather more exciting and tempting than you normally expect from a pub. One the standard menu are all the things you’d expect: burgers, steak, beef and Guinness pie, mussels of the day (sauces vary. nice idea), and a couple of vegetarian options. There’s a good variety on the menu and even without the specials I would have founds things I wanted to eat. With the specials I was in a serious quandry since I couldn’t have everything. The specials menu is what makes The Sheep Heid Inn exciting for food.

To my great regret, I don’t seem able to eat as much as once I could. No really, it is a sadness. There was lemon tart, creme brule and treacle and ginger tart on the dessert menu, and bitter chocolate cheese cake on the specials. Home made bitter chocolate cheese cake. Mmm. The special dessert is made by the resident pastry chef, Meehan, so there are some very special things on offer. I’ll have to come back for dessert… 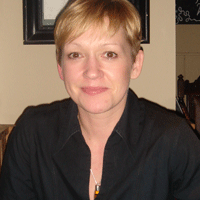 I’m nosy so I talked Sharon, the manager, into letting me visit the kitchen and say hello to Richard, the chef, and some of his team. Much magic happens in the kitchen and it’s always interesting to see one. The Sheep Heid Inn kitchen isn’t the biggest in the world so they don’t take bookings for groups of over ten. Space dictates how many plates they can get out at the same time. The restaurant is so cosy and intimate that groups bigger than that would be rather annoying to other diners, I think, so it’s a good idea to cap the table size.

The Sheep Heid Inn has had a lick of paint and a new menu and drinks list. They do sensibly priced supper and lunch menus during the week so there’s something there for most budgets. There’s a car park if you prefer driving to walking and the 4, 42 and 44 stop nearby. Those are all good reasons to go, but warm service, a really pleasant ambiance and good food are even better. If you haven’t been for a while, it’s time to visit again.

If there’s anything in particular you want to see on the menu, why not suggest a spcial? The Sheep Heid Inn is running a competition: suggest a special and be in with a chance to win a free meal. Find out more on their website.