All aboard the Northern Belle

It was an extraordinary sight, several train passengers embracing staff as they left the train. But there they were on the platform at Waverley one Summer evening.  But then it had been no ordinary trip. We’ had just spent the day experiencing Orient Express hospitality on their Northern Belle train. 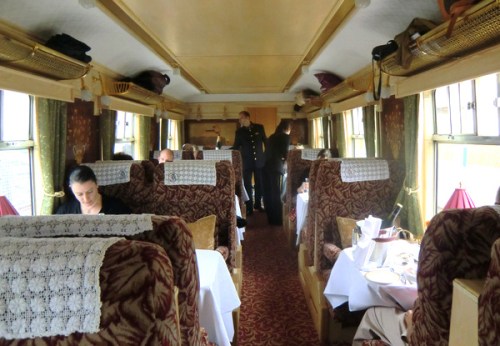 Great service on the Northern Belle

For some passengers it was the culmination of a trip that had started in London, included a stay at the Balmoral Hotel with an evening at the Edinburgh Tattoo. For others it was a very special day trip. We wended our way sedately to Oban ensconced in our carriage, the Duart. 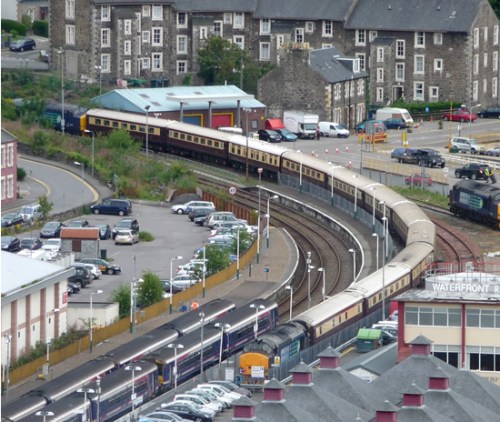 The Northern Belle in Oban

Part of a select group, Mr EF and I were there to experience the hospitality and to launch the Duart, their most recently refurbished  carriage. Each carriage on the train is different and has been lovingly restored and embellished. We felt more as if we were sitting on a comfy sofa than a train albeit a posh one . I have to give a mention to the loos – if only all were so delightful! 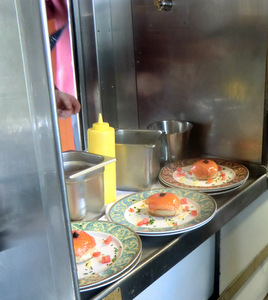 Prepping brunch in the kitchen

With my food hat on (of course), I was intrigued to find out what it is like to cook on a train for up to 250 people at a time. I was lucky enough to meet head chef and his sous chef in the kitchen to find out a little more. As you might imagine, space is tight. When I visited they were in the process of serving the brunch. Even though all the prep is done in advance, assembling the dishes in the serving area is a real exercise in logistics as you can see. Chef explained how everything has its place and showed me where all the ingredients are stored, slotted in to the tight spaces available. He also hinted that he’s hoping for an upgrade to the kitchen next year to make it more easy to work in. 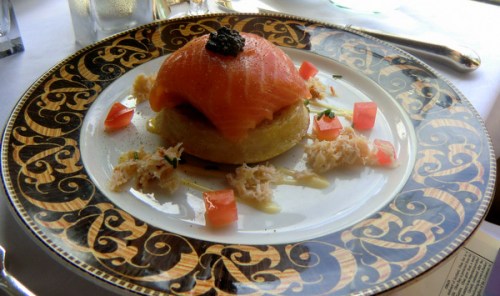 Brunch on the Northern Bellie

They aim to purchase products locally but due to the itineraries this can be a challenge. I would have loved to have seen Scottish crab to accompany the Inverawe smoked salmon rather than some from Whitby on the menu. As you’ll see from the photos, the food was generous, tasty and copious served with a fine selection of wines (or champagne of course!). 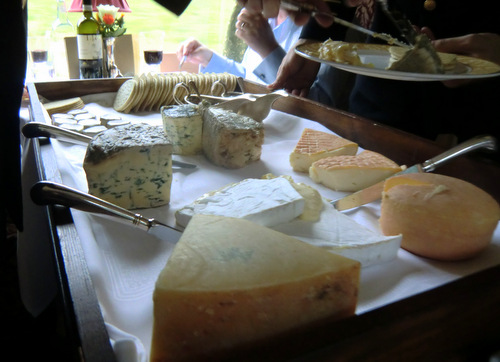 So back to the reason for all the hugs. The service on the train is truly exceptional. The staff are friendly , helpful and ready to chat. Their passion for the train is palpable. We were very well served during brunch, lunch and dinner ( I told you we were spoiled) as the wonderful scenery went past. A particular highlight for me was the fabulous array of cheeses served on a specially adapted cheeseboard .

Chatting to passengers later, each one had a story to tell. They’d been given the trip as a present for a Golden Anniversary; a young man was a passionate train enthusiast another man had entered a competition with his Building Society and had won a prize. Everyone was on board for a special occasion.

Once arriving in Oban we had a tour of the Oban Distillery and spent time exploring and enjoying the dry weather before our return journey began and time for our evening meal (just in case we were hungry!).

About the Duart Carriage

Originally part of the Royal Household train in the 1960’s, Duart was purchased by Orient-Express in 1999 and began its transformation to become part of the Northern Belle rake in 2008. The carriage required a total refit and having been stripped back to its shell, a team of dedicated and skilled British craftsmen began the careful process of rebuilding the carriage to the renowned Orient-Express standard.

The marquetry was entrusted to Dunn & Son, a British family owned business, who have been creating marquetry since 1895, crafting the delicate artwork for the Titanic, Queen Mary and Queen Elizabeth cruise liners, as well as restoring the marquetry on the Northern Belle’s sister train, the British Pullman.The marquetry design for Duart shows Duart Castle on a wood panel at each end of the carriage, with six other panels along the walls depicting an intricate pattern of flowers found on the Isle of Mull.

Duart joins the fleet of individually designed and historically named carriages of the Northern Belle; Alnwick, Belvoir, Chatsworth, Glamis, Harlech and Warwick, each named after the magnificent estates that inspired their design and have a link with the trains annual schedule.

There are many different journeys you can take on the Northern Belle and the British Pullman. Visit the website for more information. 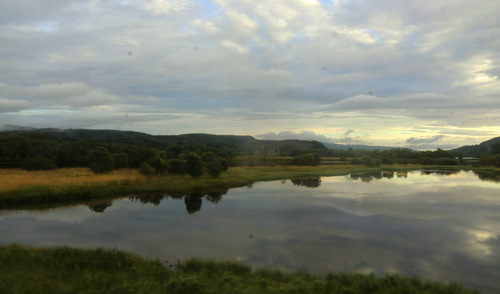 View from the Northern Belle