In this fast paced world of travel, there’s something rather romantic and civilised about train travel.

I’m obviously not talking about commuter trains, but reliving the Golden Age of travel and taking a steam train on a scenic journey through the Scottish countryside, all in the comfort of a beautifully refurbished vintage carriage. My mother, who celebrates a rather momentous birthday in November, has always hankered after a trip on the Orient Express. Sadly my funds don’t quite run to that. So I was delighted to accept an invitation from ScotRail to take one of their summer trips on the Royal Scot Steam Train, which departs from Waverley to Tweedbank every Sunday, until 25 September 2016.

For the first time since 1969, travellers are able to enjoy the beautiful scenery of the Scottish Borders from the easy comfort of a railway carriage and for those wishing to splash out, a premier dining experience. Standard class travel is available too but refreshments aren’t included, although they can be bought on-board.

Escaping the madness of the August fringe, it was worth the early start. A complete surprise, my mother thought we were heading to church. Highly unlikely! Our fellow travellers were also celebrating big birthdays, anniversaries, or were just Walter Scott or steam train enthusiasts.

Boarding the Royal Scot, we began our journey at Edinburgh’s Waverly Station, named after the famous novel by Sir Walter Scott. With a puff and a hoot, we were off passing through the beautiful countryside. Reliving the Golden Age of Travel

The journey was time to take stock and relax as we were served the Great Scottish Breakfast; and ‘great’ aptly describes it. There’s a lot of it so make sure you come with an appetite.

Starting with a glass of Prosecco, we were offered chilled orange or grapefruit juice. This was followed by a choice of half a fresh grapefruit; a selection of cereals; honey crunch granola and natural yoghurt; or porridge served with a nip of Scotch Whisky. I opted for the porridge which was beautifully creamy and satisfying. 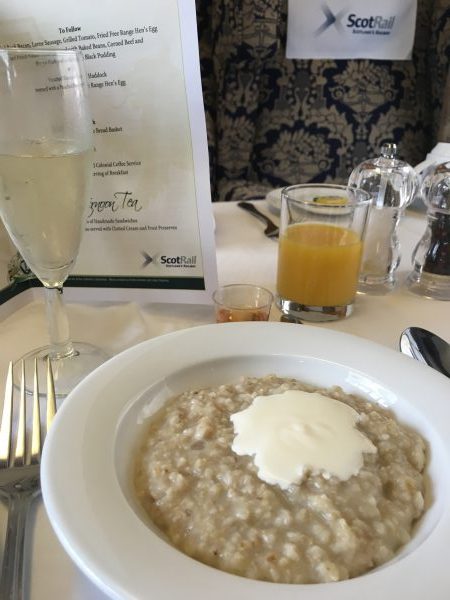 Porridge served with a nip of Scotch Whisky

The bread basket had a choice of white and wholemeal toast, oat cakes and morning rolls, together with a selection of marmalade, fruit preserves, honey and Marmite. And if you have any room, a second serving of the bread basket is offered, this time with the addition of pains au chocolat and croissants.

All credit to the very friendly crew, who did a stupendous job of welcoming us and serving silver service throughout the journey, giving it the air of the Golden Age of travel.

In between, we passed through Brunstane and Newcraighall on the city’s eastern edges, before heading due south via Shawfair and Eskbank to the green fields and forests of Dalkeith and beyond.

Old mining villages such as Newtongrange and Gorebridge were up next with  the journey taking us through the picturesque scenery of some of Scotland’s former industrial heartlands.

And then it’s was on to a lovely rural stretch passing sweeping plains of open farmland before moving into the lush valleys to the north and south of Stow.

We then reached Galashiels, one of the largest towns in the borders and renowned for its textiles and the wonderfully named local football team, Gala Fairydean Rovers (nicknamed ‘The Braw Lads’).

And just a few minutes later came the end of the line, Tweedbank, across the winding River Tweed which, 17 miles to the east, marks much of the border between Scotland and England.

All along the route we were greeted by waving steam train fans lining the banks, taking photographs.

Ending our journey at Tweedbank, just a short distance from Scott’s beautiful 19th century home, Abbotsford House, we disembarked for an informative tour of the house and gardens. This can be pre-booked. Our return journey was the opportunity for more relaxing and some delicious handmade sandwiches, followed by warm fruit scones with clotted cream and fruit preserves and a good English staple of a pot of tea or coffee. No dinner was required that night following the feast served by ScotRail! 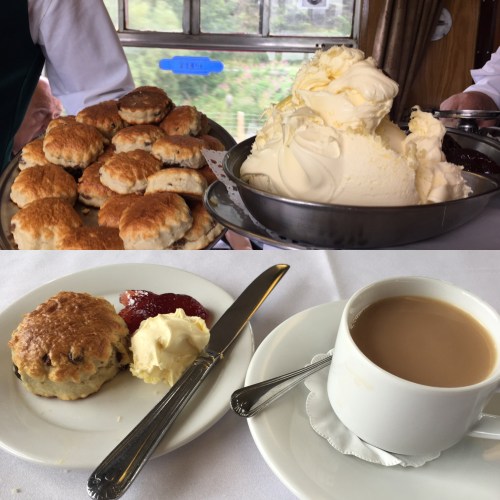 So for the cash and time poor, this was certainly a memorable ride and whilst it wasn’t quite the Orient Express, was a fabulous way to celebrate an early birthday treat for one old lady on an ‘old lady’!

The ScotRail Summer Steam Train Trips are running every Sunday until 25 September, with a morning and afternoon trip to the Scottish Borders.
For further information and to book train tickets and organised excursions, visit: ScotRail or call 01483 209 888
Prices for the ScotRail Summer Steam Trip:
– Premier dining experience on Borders Railway: £130 including fine dining
food & drink
– Standard class: £55 (adult), £40 (child 0-16), £150 (family: 2 adults, 2
children). Refreshments aren’t included, but you can buy sandwiches, snacks
and drinks from the buffet on board.
Kerry travelled as a guest of ScotRail