January. We’re full of good resolutions. I’ll exercise more or eat less,give up drinking, save money after the Christmas excess. Goodness it makes January a boring month. We’ve found something that will brighten you up and something that could well be good for you. 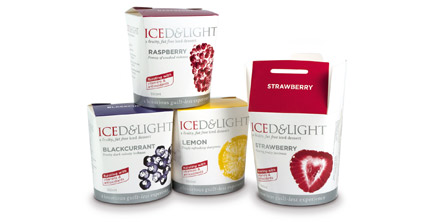 Cue arrival of a box of delights – six different flavours of IceDelight – a range of fruit ices from Belhaven Fruit Farm.

The packaging is stylish, modern and inviting – it also announces, astonishingly, that the fruit ice could be one of your five a day fruit and vegetable portions.

The texture is silky smooth and almost creamy. The flavour is full and rich and the high percentage of fruit really comes to the fore (40% of raspberries for example). Really fruity flavours – more tasty than a sorbet we thought. Really nice and smooth texture.

Whereas you might eat dairy ice cream as an accompaniment to a dessert, Ice Delight asks to be eaten on its own. If you do want to eat it with something, we’d recommend something complimentary – a classic combination of strawberry and rhubarb is proved again with the Strawberry flavour. 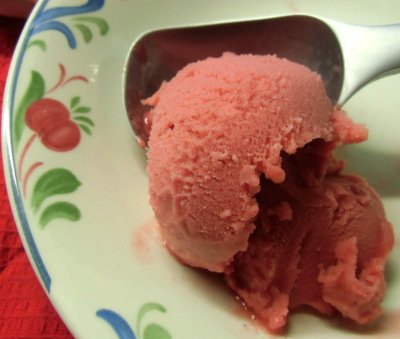 I asked A and J to help me taste.

A enthuses “This would really encourage me to eat it. Seems too good to be true – a delicious desert with low calories and that goes towards your five a day. A pudding that is good for you. I’ll take it!

A on Raspberry  and Lemon:  “The raspberry was the winner for us. You can really taste all the real raspberries that have gone into it, not a hint of artificial flavours which is always a major bonus. The lemon was the least favourite. They haven’t managed to make it as smooth as the other flavours, so it was a bit crunchy by comparison”.

J on Blackcurrant: “We loved the colour and the taste was very good. Because it is tart we think we would eat less of it in one sitting. We thought it would also be lovely with sparkling wine or topped off with vodka. If you say it is ice-cream, people may be confused…I sure was. Maybe it is more like sorbet.

J on Strawberry: “We really liked the taste and my wife doesn’t usually go for strawberry. The texture was more to our liking because it was more reminiscent of ice cream. The only drawback is it was a little too sweet for me”.

I tasted Raspberry, Strawberry and Gooseberry. I have to agreed with J’s wife, I’m not usually a fan of strawberry flavours but this was delicious. The Raspberry was definitely the winner, rounded and very creamy. Gooseberry might not be the first thought for a flavour for fruit ice, but it’s very delicious and it’s more subtle taste would partner well with flavours such as ginger.

Both J and A are rather confused by the name. A sums it up “A gimmicky name with its iced delight / iced and light play on words. I think it would have been better to play up the fruit farm provenance of the contents, as that’s what’s the best bit.

Our verdict: A must try dessert. It’s now available at Waitrose and other farm shops.

How it all began

The IceDelight story began back in 2007, when a spectacular summer left Belhaven with a bumper crop of fruit. They froze some of the berries and during the quiet winter months, they set out to produce something new with the surplus. In pursuit of an iced dessert they set off to Tuscany where Italian ice-cream-makers taught them the secrets of their craft. During the next few months experiments with thick dairy ice-cream, pure fruit sorbets, and everything in between resulted in the new fruit ice.