Union of Genious – how to kickstart a soup kitchen

How it all started

Elaine Mason had a dream to set up a café selling soup whilst working as a geologist. Threats of redundancy focused her ideas and as any budding entrepreneur should, she did her homework. She offered soup to her husband’s colleagues over a 10-week period free of charge in return for their comments on her soup recipes. She quickly found that they loved the soup and in particular the more unusual flavours. She knew she’d got her recipes correct. 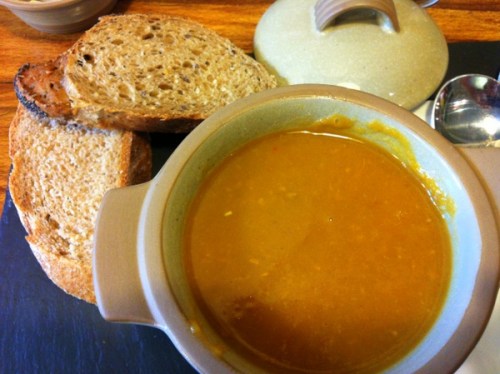 Soon after, Union of Genius was born. It’s located near the University of Edinburgh on Forrest Road. There are just few seats and a steady stream of customers – around 100 visit each day to choose from the soups on offer.

It’s enjoyable sitting there watching customers come in. They look at the board and exclaim over that day’ s choice. Each has a personal favourite. There’s also something else that’s rather unusual. Many customers arrive clutching brown paper bags for all the world as if it’s some secret society and the price of entrance is in the bag. A card is stamped as they hand over the bag. This is not a “Buy 10 coffees and we give you one free deal”, but a loyalty scheme with a difference. It’s part of an important commitment on Elaine’s part. She’s invested in compostable cutlery and packaging which alas, is all too expensive. By encouraging customers to bring back their rubbish rather than throw it away at work where it could go into landfill, she recycles it and rewards participants for their loyalty and recoups some of the cost.

The Soups
I’m standing in the kitchen as Elaine makes today’s soups. On the shelves are tens of pots of herbs, spices, flavourings and stocks. There are several pots of oups bubbling away and the smell, as you can imagine is enticing.  Elaine makes the soup by hand in batches of 20 litres, so even with 6 soups on offer some do sell out and much humming and ha-ing goes on over that’s person’s second choice. Each day, 3 seasonal soups are offered, currently Caldo Verde, Celeriac  and Sweet Potato and three further soups. There are always soups that are vegan and most are gluten free. The recipes are often pure inspiration, but other times are prompted by favourite cookbooks. Elaine shares her plans to try a chestnut and chorizo soup inspired by the recipe in the Moro cookbook and we’re very proud to have her recipe for one of the newest soups Thai Spiced Yellow Pepper below.

The soups are not only sold in Forrest Road but by a growing number of cafés across the city (all delivered by Pedal Power no less). The quality, taste and provenance is all really important. To complement the soups are breads from Do Re Mi (chosen after trials with many bakeries across the city), products from Lovecrumbs, Love Pure Cakes, Coco of Bruntsfield, the Chocolate Tree and Artisan Roast. A true Union of Genius.

I ask Elaine if anything has surprised her. “Yes”, she says. “I thought my market would be mostly women, but there’s a large following of men who buy the soup. Also the number of people prefer to eat gluten free food is astonishing – we have two types of gluten free bread and cakes to satisfy demand”. 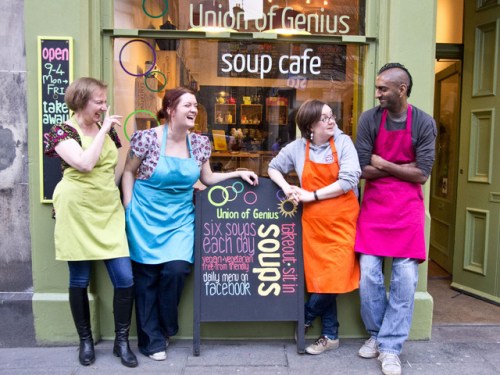 The growing demand for their soups both in the cafe and from other businesses has prompted the plans for a commercial kitchen where they can increased the amount of soup made whilst, at the same time, being able to maintain the quality and the personal touch.

They’ve found the premises, but the equipment needed to achieve this goal costs around £10,000 . What it will allow them to do is to make each soup fresh, chill it down for a minimum of 12 hours for the flavours to develop then test and season it just before delivery. It is important that every soup is made from scratch – no pre-mixed pastes here – and made by hand every single time.

Fantastic news. On 10 February the original target was met. With 283 backers raising £20,650 the commercial kitchen is now up and running and supplying even more places in Edinburgh. 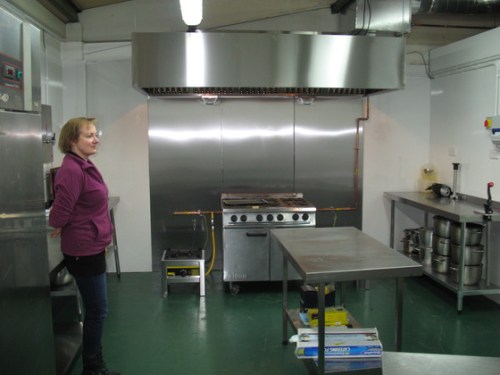 This will make around 4 litres. This is one of Union of Genius’ newest soups; it went on the menu only last week. Traditionally, Thai cooking involves fish sauce, but Elaine likes to ‘veganise’ recipes where possible, so she has substituted the fish sauce for tamarind and soy.