I caused an incident last week. I was enjoying the magazine I’ll describe in a moment so much that I’d taken it along to Centotre (now Contini’s) in Edinburgh where a group of us meet on Friday mornings. Brendan  and Mike were as captivated as I. I later tweeted them the details of where to purchase the magazine in Edinburgh. Next thing I notice is a flurry of conversation on Twitter between Analogue Books (alas now closed) and Brendan and Mike. Brendan had got to the shop first to buy the only remaining copy just as Mike was phoning the shop. The phone was handed over to Brendan and I can only imagine what expletives might have been exchanged.

So what had caught their imagination? 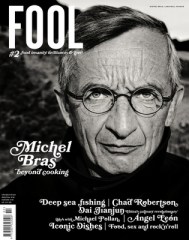 Fool Magazine recently won the Best Food Magazine 2013. In her round up of foodie gifts Ruth Reichl brought it to my attention, and sight unseen I ordered a copy from Sweden. It was probably the photo of Michel Bras that did it – I had particularly enjoyed the film on the months up to his retirement Step up to the Plate (Entre les Bras) at the Edinburgh Film Festival.

I had expected interesting stories, but hadn’t quite appreciated how absolutely absorbing they would be and how the fabulous photography enhanced the words.

Issue 2 of Fool Magazine “Below the surface” Food, insanity, brilliance and love. 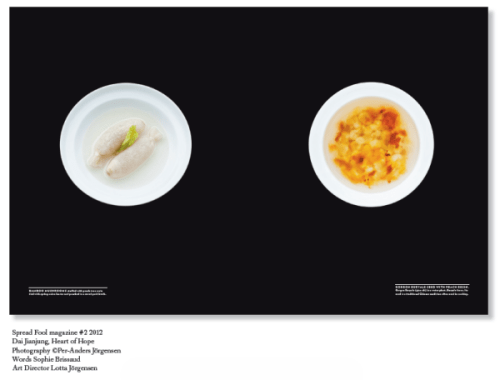 The writing is beautiful and by authors all over the world. I’m guessing that they must have written in their own language and talented translators have been at work. Topics are varied. We discover chef Angel Leon who grows his own plankton for diners; Dai Jianjun a passionate advocate of traditional Chinese agricultural growing practices and foods and how deep sea fishing is threatening many species. And of course the article on Michel Bras doesn’t disappoint.In the “Iconic Dishes” article signature dishes are portrayed including Michel’s famous La Gargouillou, first created in 1980 and still on the menu. Fascinating topics made me want to learn more.  Just two article jarred, a New Zealand chef searching for the perfect taco in California and Andrea Petrini’s article on Bells and Balls belongs in a different type of publication. 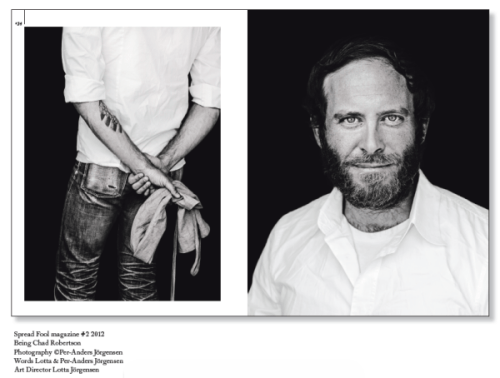 This is a magazine for the thinking foodie. One who is curious about food in the world – it doesn’t include recipes, it seeks to inspire, it’s something to be handled and treasured.

Other food magazines that caught our eye

More publications that are well worth seeking out. 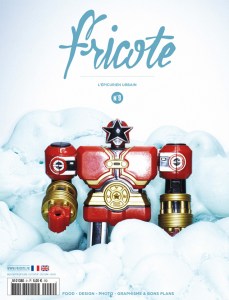 This magazine is in both French and English. It’s style is quirky ever so slightly geeky – possibly an acquired taste but it grows on you.. Articles range from food in films to how to cook an egg complete with off the wall illustrations.

Based in London, The Gourmand takes inspiration from  restaurants, bars, cafés, stalls and ingredients that are increasingly available to us. Topics are wide from Mark Hix’s library to ambergris as an ingredient. Illustrations are fresh and photography pleasing.

Hot Rum Cow
A quarterly magazine for those fascinated by wines, spirits and beer produced in Edinburgh.

The theme of the current issue is “Before and After the Apocalypse . Writing from Michael Pollan and Tony Bourdain mixed with recipes and opinions. A really good read.

Dubbed a magazine for small gatherings. This American magazine has a broader focus, not just food. It’s stylish and dare we say a lifestyle magazine.

A stylish magazine all about Chinese Food. Written with passion, it has a much broad topic range than you might imagine

All photos with the exception of the Fricote cover are included with permission from Fool Magazine. Thank you.

Some of the magazines are now stocked in Edinburgh at Stag Espresso at the Warburton Gallery, 1-2 Victoria Street, Edinburgh.