I’m not one to gush, butohmygodgotoAizlerightnow.

Just stop. Drop whatever you’re doing  and book your dinner at Edinburgh’s new dining experience, Aizle. It’s a charming place, with a well thought-out concept, staffed by talented people who are creating and serving fantastically fresh, deliciously dynamic food. You won’t be sorry. (Unless, of course, words like “experience” and “concept” in relation to food set alarm bells ringing for you…) 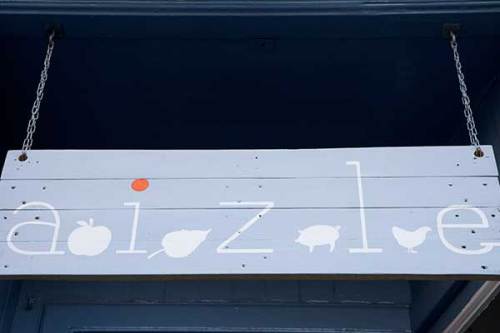 Subtle signage but a memorable meal

What’s so awesome about Aizle then? Firstly, there’s no menu per se. Instead, great food just turns up in front of you. The only dinner-y clue is a blackboard which lists tonight’s ingredients: pumpkin, ras el hanout, truffle, crab, mussels, chickweed, skate, sea aster, parsley root, Clash Farm pork, apple, honeycomb and gnudi. We had no idea what order these items would be served in, which would appear together or, for that matter, what some of them even were. 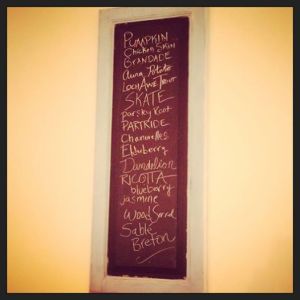 I’m excited. As someone who will try anything (including, once, fermented yak’s milk), I have every confidence that the chef will make the best decisions for my taste buds. He knows his ingredients better than anyone. And tonight, those ingredients are on that board because they’re the best of what’s available seasonally and locally. It’s a dream.

Die-hard menu fans need not despair – there is a drinks menu. And it looked great. But by now we were beyond menus, so we opted for the matched drinks. By the same principle of the chef’s knowledge being in my plate’s best interest, the bar staff should know which wines will best suit my glass. And as Aizle is run jointly by a chef and a mixologist, what better way could there be to appreciate both arts. 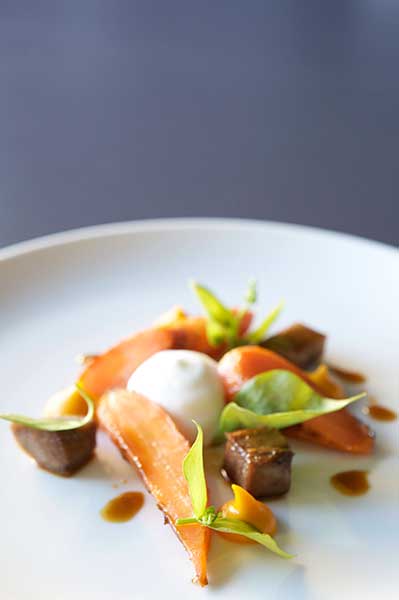 Not actually the starter Amy had, but gorgeous, no?

Our starter was a feast in three parts. There were a pair of rice crackers with cucumber gel, crab, chilli and chickweed (a leafy plant that grows in the wild); it was all light and delicate.

Then there was a couple of hearty pieces of intensely cheesy Parmesan shortbread, with shaved truffle and honeycomb, which thundered across your tastebuds.

Lastly there was a small glass jar of velvety pumpkin soup, containing a few soft pumpkin chunks and topped with a milk froth, delicately spiced with ras el hanout. (Ras el hanout roughly translates as ‘the best in the shop’ and is a lovely mixture of fresh Middle Eastern spices.)

The dish was accompanied by Barney’s red rye beer. Not one of my favourites – I find it a bit underwhelming – but a good local choice, perfectly satisfactory for the dish we were served. My appetite? Consider it well and truly whet.

To follow we had gnudi – like gnocci but made with ricotta. We can all agree that replacing a carb with cheese is genius. But just in case those little balls of soft ricotta weren’t enough, they came with a Parmesan foam. Excellent. The accompanying scorched baby leeks were charred to bitter perfection, providing a good flavour and texture contrast. A sea-salty balance was achieved with a scattering of mussels. To wash it all down we had a delightfully bright, mildly sour Chilean Chardonnay.

Next up was a plate of skate, which none of us had tasted before. It had a lightly fishy flavour and its dense, white-ribs, which easily flaked into strips, had a very meaty texture. Saltiness was delivered by caper berries, a sweeter, grainier version of the caper, and samphire-like sea aster. Parsnips gave the dish a sweet earthiness and with it we enjoyed a glass of Catarratto, an Italian white wine made from a Sicilian grape. 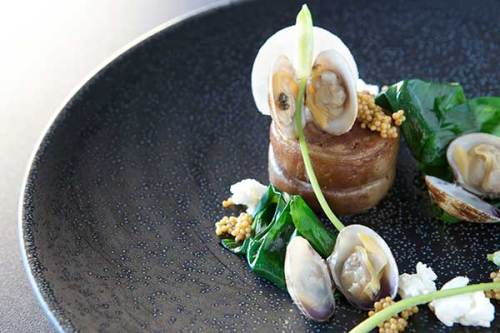 Our main consisted of pork cheek with a side of pork terrine, topped with scratchings.  The richness of the meat was offset with a combination of radishes. Some were fresh and some were pickled in the form of choucroute,  similar to sauerkraut. A bitterness was provided by an unexpectedly complementary burnt apple sauce and a Chilean Carmenere,easily the best red wine I’ve ever tasted – its depth and body gave it a real wow factor.

Pudding consisted of caramel ‘fluff’ (it was more like a texture with a caramel flavour than your typical foodstuff), a streusel (a type of walnut/cashew crumble) and tubes of pastry cream (like a more solid, less sweet creme patisserie). Around the plate were tiny, delicate, pink apple blossoms and a sweet apple gel, as well as a stand-out apple and celery ice cream. An interesting combination; the semi-savoury flavour and simplicity of the celery really cut through the apple.

I felt the dessert was rather large, given everything else we’d eaten but that didn’t mean that any of it went to waste. Nor did it prevent each of us from enjoying an accompanying beverage: one pretty apple cocktail, one charming whisky cocktail in a miniature carafe and one very pleasant, well-balanced sweet dessert wine, Domaine des Baumard. 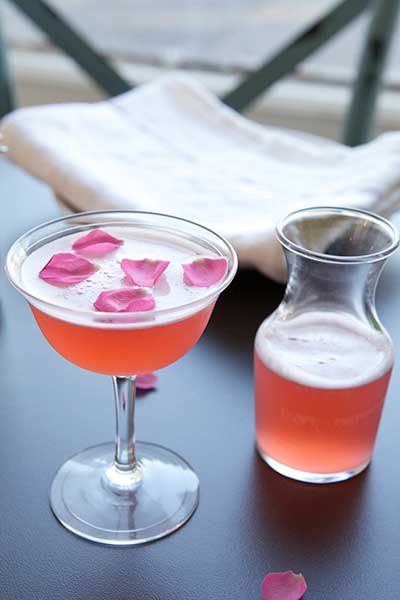 We put this thing to bed with coffee. For a fixed price of £3 each we got several small cups of beautiful floral Chemex coffee, so good that no milk was required (which is very unlike us). The only letdown was the answer to what kind of coffee beans were used: ‘Italian.’ Given the expansive knowledge of the other ingredients, I had expected a slightly more in-depth response.

The meal is a fixed price of £35 and for that we had five courses. Bargain! Each course offered a decent portion size without leaving you wanting more. Our matched drinks were a further £25, for which we got a beer to start, three outstanding wines and a cocktail or dessert wine to finish. Currently Aizle only opens for dinner, which seems reasonable. How could you appreciate all that skill in a quick lunchtime sitting?

It’s fair to say we certainly didn’t regret our lack of choice – in fact, we fully embraced it. And we were richly rewarded. Every morsel that passed our lips was a considered combination of flavour and texture. If you don’t like the concept, fair enough, but in terms of creativity, quality and presentation, Aizle sets a high standard for dining out.