Recently Tesco announced how much of the food it sells goes to waste. The majority of it was bread. Even artisan bakeries have bread that’s not sold. So what can be done with it? When I was training in France, you can imagine how much bread we made. Some went to local needy organisations, the rest went to a factory where it was made into breadcrumbs. The proceeds went to charities. Here in Edinburgh, the Real Junk Food Project runs events providing tasty dishes from products that would have been thrown out.

We were excited to catch a glimpse on TV of bread being made into beer at the Hackney Brewery in London. A while later, we saw the recipe in the Real Bread Campaign newsletter shared by Toast Ale who were set up by Feedback, an environmental organisation that campaigns to reduce food waste. The idea was born. I really, really wanted to make beer from toast. 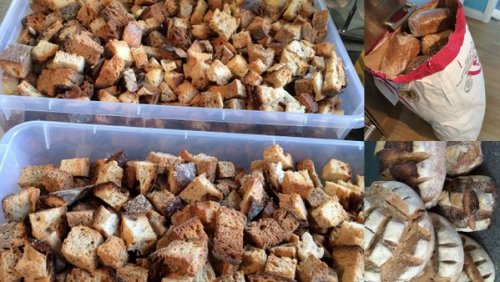 Preparations are under way

Stewart Brewing have a rather nifty Craft Beer Kitchen. You can sign up to go along and make beer to your own recipe (such a great gift I’d suggest). Count on around 3 hours to make the beer. Stewart Brewing’s chief brewer Jonny was as keen as us to have a go. Having looked at the toast beer recipe, he told me we’d need 7.5 kg of toast to make the beer. Not only that, but we’d probably need to make that toast from 12 kg of bread.

Bakery Andante saved me a selection of their artisan breads.

Reading the instructions it suggested toasting, then crushing the toast. I decided that I’d cut the bread into small pieces to make toast “croutons”. It seemed a good idea at the time. But one glorious thing about artisan bread is that it has a good thick crust. The first challenge was to cut up the bread! After 3 long hours I had cut and toasted the bread in my domestic oven. There were points when I thought, why did I start doing this?

At the Craft Beer Kitchen 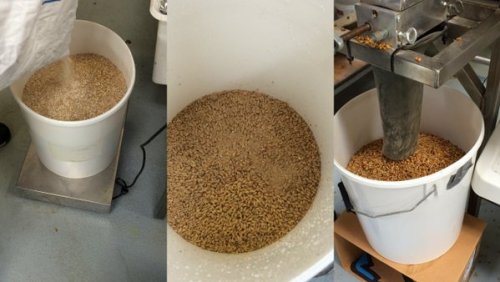 Weigh and grinding the grains

Stewart Brewing have some nifty software. You decide style of beer, the ABV and even the colour (toast colour of course) and it generates the recipe.  Here you’ll need to excuse me, I know very little about brewing beer. Suffice to say it was great fun.

We weighed the grains and steeped them in hot water with the toast. Then it was time to add the malts:Munich, Dark Crystal and Cara Malt. We then drained the grains whilst adding water at the top. 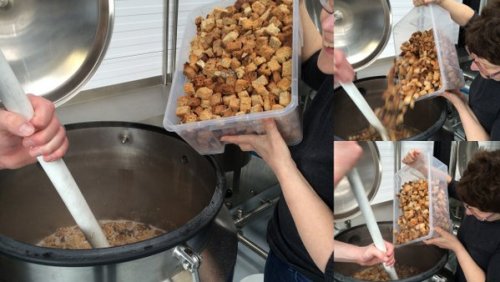 Adding the toast to the mixture

Chosing the hops was fascinating. I am not a fan of very bitter things and the aroma of some of the hops were was really astringent – a characteristic of American hops in particular. We kept to home grown hops and plumped for Kentish Hops. Our aim was to create a well rounded, golden beer. 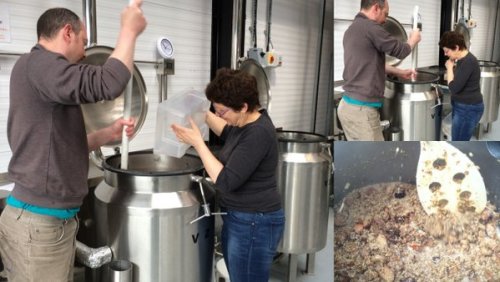 Our selection of malts and grains 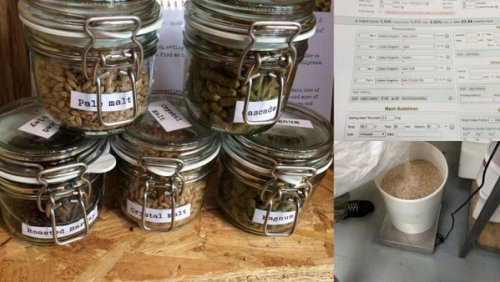 Malts and the recipe

And now to the boiling stage. 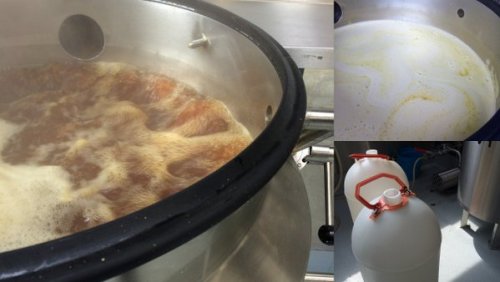 Our final step and this stage was to cool the mixture and to fill the containers for it to gently mature for 5 to 6 weeks. 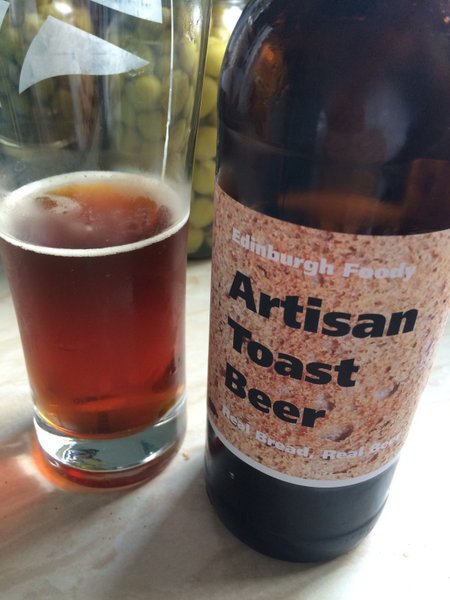 After 6 weeks, Stewart Brewing bottled our beer and added our Artisan Toast labels. We loaded up the boxes, stopping by Bakery Andante to give them a share. We then cracked open the bottles to celebrate my farewell from Edinburgh Foody and off to new adventures in Gloucestershire!

It’s a beautifully rounded beer with just a touch of toastiness on the palate.