The right time for Tempus?

Update 2016: This restaurant has now closed.

Nice. Everything about Tempus and our experience there was nice. Service, food, drinks, setting. All nice. Which begs the question – is nice enough?

Tempus is reached through the George Hotel bar, a grand room with high ceilings, loud with the chatter of patrons bouncing off all the hard, shiny surfaces. It’s nice. But the restaurant area has less atmosphere. It’s cavernous, long and dimly lit by gaudy chandeliers. And it just can’t shake the feel of a hotel restaurant. Yet that doesn’t mean Tempus and its new menu aren’t without merit. I didn’t find anything to really excite me, but I certainly had a nice time. 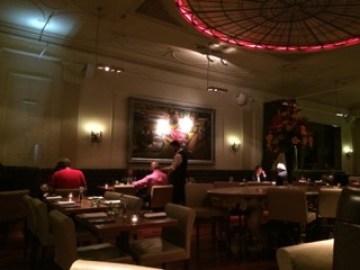 We started with the Isle of Mull crab cake with Arran mustard hollandaise. Hey, it was nice and there weren’t any leftovers. But the overwhelming flavour was the zing of lime. It wasn’t unpleasant, providing a fresh contrast to the base note of crab, but it was somewhat overpowering. There was visual evidence of other ingredients, such as herbs, but they seemed to add little to the mix. The hollandaise didn’t help in that department either, due its miniscule quantity. Nonetheless, the cake was well cooked with a lovely breaded coating and the accompanying poached egg was spot on. Nice.

Isle of Mull crab cake. Off to a nice start.

Moving on to mains. My dining pal settled on the fish and chips straight off the bat. It’s always good to try a classic. Soon a sizeable hunk of delicately battered moist cod arrived and it was definitely the star of the plate. Meanwhile, the accompanying chips were stacked like Jenga bricks. An appetising golden brown on the outside, they were not as fluffy in the middle as we hoped. There were also redundant drips of balsamic across them and a few fingerprints on the white plate. Not so nice.

Concealing my fish envy, I turned to my choice, chicken ballotine. It was joined by carrots, kale and a lemon thyme jus. Again, nice, but not a ‘hold the front page’ experience. The chicken tasted like… well, chicken (there was no evidence of seasoning) and it’s fair to say the veg were well cooked – neither under- nor overdone. Unfortunately, the jus was all wrong. Too salty, too peppery and with an almost burnt flavour. And the cardinal sin of Masterchef had been committed: the jus was poured all over the food. Everything looked brown and sloppy. Always put your sauce in a jug! However, my side of onion rings was perfect. Crispy on the outside, juicy on the inside. 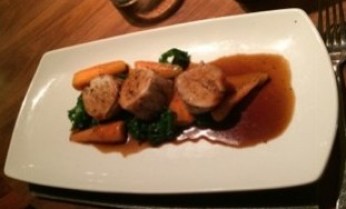 To finish we shared the chocolate orange tart with pecan brittle, which was all that stood out on the dessert menu. Everything else is what you’d expect (nice): cheesecake, sticky toffee pudding, tarte tartin. At least the starters and mains are more inventive: fresh peas as a starter, three kinds of fish main, a polenta cake for the veggies.

You’ve probably guessed what we thought of the chocolate tart. Yeah. It was nice. It had a slightly bought-in feel to it (perhaps the reason why the desserts seem more run-of-the-mill?) with a bland, doughy pastry and not much depth to the chocolate filling (thank goodness for the zing of orange). The brittle was more sugar than pecan but it was a good texture complement, along with a blob of creme anglaise.

Do you think they fell out and had to be separated?

So here’s how I see it. I’m a food snob who loves to eat things she’s never had before. Dishes packed with unusual flavours which are both dynamic and well-balanced. But that’s me. Not everyone eats out just for the food, right? Some people want to go as a treat, have someone else cook and catch up with their pals in a nice setting. They don’t want out-there flavour combos or a menu that challenges their preconceptions. They just want to have a nice time. And y’know what? Tempus is a great place to do that.