Get warm with Gran Steads

I am writing this with a gale howling outside. It’s January, its almost dark even though it’s three thirty. I’ve had far too much caffeine already today. What should I have to drink?

We talk quite a lot on this blog about alcoholic drinks. Beer seemed to pop up quite a bit during 2014. This month, there are those hardy souls that are giving up such beverages. With the lower limits for drinking and driving also now in force, what options do we have? There are non-alcoholic beers. The amusingly named Hee-Haw lager (Hee-Haw means nothing in Scots) recently launched Tennents packs a lot more punch for taste than many. There are drinks from well-known brands such as Fentimans and Fevertree and there are the smaller independents including Gran Steads.

Caroline and I first discovered Gran Stead’s Ginger Company a couple of years ago. At the time, the branding failed to stand out. I was happy to discover this is now updated and there are more flavours in the mix. 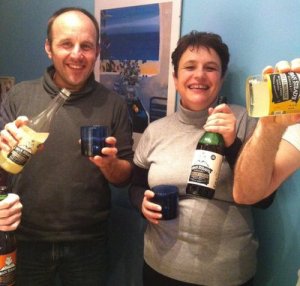 With the help of four visitors staying with us from France, we launched into our tasting. When they’d got over their disbelief that these drinks were not purely to mix with alcohol (which of course they can). We tried Blackcurrant with a Zing, Lemonade with a Zing, Traditional Still Lemonade, Mellow Ginger and Reduced Sugar Fiery Ginger. We quickly realised it probably had not been the best idea to try them randomly, as the ginger-y-ness varied widely and the stronger ones overwhelmed the more subtle flavours. The bottles were rearranged. The contents re-tasted.

Two favourites quickly emerged. Having drunk far too much Ribena when young, I am no longer a big fan of blackcurrant drinks. However, I loved the subtle blend of blackcurrant and ginger. I am converted. This bottle was swiftly emptied. 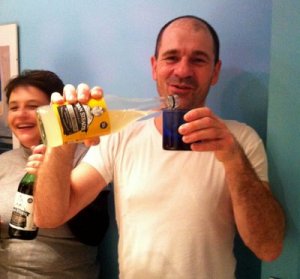 The Mellow Ginger is smooth, very warming and tasty. This turned out to be the original Gran Stead recipe. It’s dark brown in colour reminscent of the colour of Cola. It’s not overly sweet and has just the right amount of ginger. We all kept coming back to this one

The Fiery Ginger came a close second. Here, less sugar is added and the fiery ginger hits you with a little “oomph” but in a good way. The flavour we weren’t so keen on had no ginger at all. The tartaric acid added the drinks seems rather prominent in the lemon flavours.

Did you know? In Britain, Bartenders put out small containers of ground ginger for people to sprinkle into their beer in pubs in the 19th Century- apparently how ginger ale was born.

Christiana Stead (who current owners the Knox family affectionately refer to as “Granny”) was born in the 19th Century and lived in a picturesque village called Middleton-in-Teesdale in the North of England. Her non-alcoholic ginger drink recipe, used to create Mellow Ginger, has been delighting generations for over 150 years.Gran Steads is made in Sussex, there are stockists in Edinburgh and Scotland and you can also order online.