Just Burgers and Beers: Got Beefs?

I’ll admit it. My favourite food in the whole world is the humble, everyday sandwich. I can’t get enough of ’em. And really, a burger is just a beefier take on the sandwich, isn’t it? So if there’s one thing I’m always happy to sample, it’s a burger. Lucky for me, I was recently fortunate enough to be treated to one by the nice people at Just Burgers and Beers.

As soon as I arrive, I know I’m in good hands. There’ll be no alarms and no surprises here. The place is decked out in the appropriate style for a burger joint these days: wood panelling, low-hanging exposed light bulbs, metallic surfaces. The menu plays the game too, with tongue-in-cheek names for burgers stuffed with anything and everything your groaning arteries might desire. Excellent. 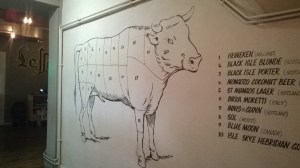 It’s a nice touch that each burger also comes with a beer recommendation. Personally, I would love to see less space devoted to those beers mass-produced by multinational corporation Anheuser-Busch InBev, such as Heineken, Amstel and Peroni. But they’re safe choices for the constant stream of tourists that JBB’s Royal Mile location caters for and there is an homage to local, Scottish brewers with offerings from Innis and Gunn, Stewart’s and Williams. And on its size alone, I do have to respect the selection JBB offer.

On to the grub. In case you’re wondering, JBB does sell other things in spite of its name. Some of the alternatives were summarised for me on a sample platter of various toppings and sides. I wasn’t impressed by the very salty chicken wing and felt the seasoning of the beef chilli was nothing more than average. (But perhaps as an avid consumer of Union of Genius’s vegan chilli, I’m biased.) The coleslaw’s fine cut carrot and cabbage smacked nicely of lemon and pepper but was far too wet. The highlight of the plate was a sweet and juicy pulled pork, infused with malty undertones from a beer marinade. 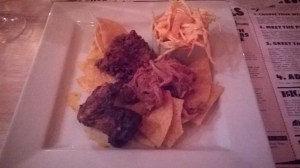 To follow I opted for the ‘Mac Attack’ burger, a beef patty topped with cheese and bacon and joined by a deep fried macaroni cheese fritter. (To be honest, I wanted to see if such a thing was possible and if I would survive consuming it.)

But it was bad news, ‘burghers. Compared to others I’ve had in Edinburgh I thought the burger itself was overcooked; devoid of any meaty juices which left the meat tough. The mac ‘n’ cheese fritter’s dry, salty coating was too thick, making it bigger than the beef patty and leaving the two elements feeling very separate. Inside however the cheese sauce was rich and the macaroni was soft and comforting. I’d have been happy with a thinner, uncoated dollop on top of the burger in place of the cheesy rubber that was stuck to the patty. The cheese topping did contain little shards of crispy bacon though, which were a great texture contrast.

Fortunately, my dining companions were more impressed by their burgers. The ‘Dirty South’ was topped with pulled pork which kept its beef patty moist, whilst the ‘Joe Pesci’ with Milano salami and provolone cheese was something you could actually fit in your mouth all at once. It made for a more well-rounded eating experience than my half beef burger/half macaroni fritter. So maybe it’s me; perhaps I should just learn to stick to simpler offerings. 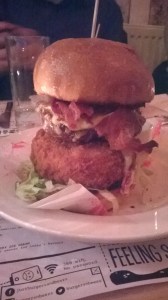 Mac Attack: get stuck in

Unfortunately, other elements were also lacking. The sauces were simply awful. We were given a grain mustard that was reminiscent of a sour paint stripper and a very synthetic-tasting chipotle mayo. I was very disappointed by the chips and curly fries too. Fine in and of themselves, sure, but clearly not prepared fresh; they were betrayed by a pale uniformity usually characteristic of bought-in frozen fries. The saving grace of the sides were the fantastic onion rings. Huge thick circles of crisply battered joy that were full of real flavour.

But context is everything, right? Just Burgers and Beers will never want for custom with their Royal Mile location – and their fast-food fare is far superior to some of the other options on the High Street. Us locals know our burgers though, and where to get our fix.

Amy dined at the invitation of Just Burgers and Beers.