The story of the creation of Kinnettles Scottish tea would be worthy of a film with two strong women in the lead, a handsome young couple and long neglected walled gardens across Scotland taking staring roles. 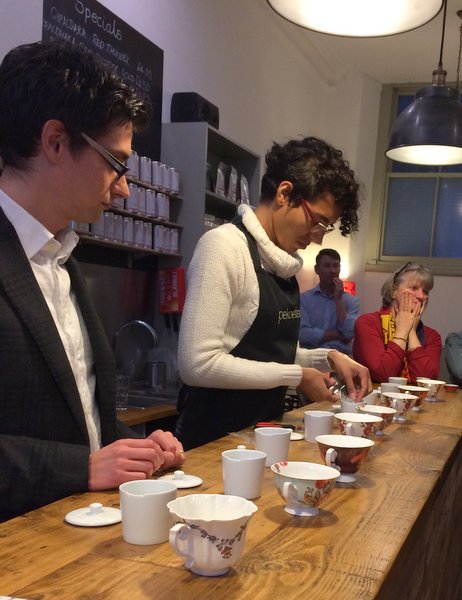 But first, imagine how lucky I feel to have tasted the new tea – there is just 2 kilos available this year! 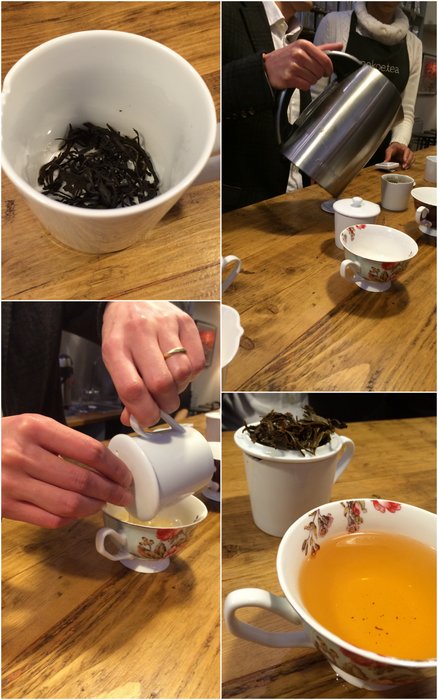 Unlike many other tea companies, PekoeTea imports many of their teas from source, and take great pride in the provenance and sourcing of every tea in their range. Edinburgh-born Jon Cooper, 33, studied electronics with music before setting up PekoeTea in 2005 with his wife Esther. Jon’s research into supplies of tea from source, rather than buying from UK wholesalers which is standard practice, proved fruitful as he was invited to China to meet some tea experts, and has visited them several times since. PekoeTea are still doing business with them today.

Jon lined up special tasting cups white with lids in front of pretty tea cups. Boiling water is poured over the leaves and left to stand for 3 minutes (5 minutes if a tea pot is used) then strained using the special lids into the tea cups and the leaves set aside. A high quality tea such as this can be brewed a second and third time but is never left on the leaves. John explains that the Kinnettles Gold sits somewhere between a black and green tea and has a taste completely different to any other in their extensive range.

We drink the golden liquid without milk. It’s incredibly refreshing with a slightly spicy hint and dryness. There’s a sweetness and you continue to taste its subtle flavours as it lingers in the mouth. Simply wonderful. If anything, the second cup was even more delicious again brewed from the same leaves.

How the tea came to be created 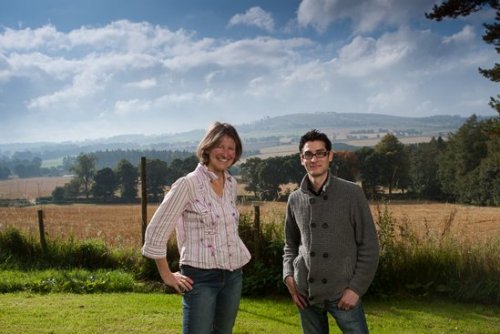 From an early age Susie Walker-Munro she accompanied her parents to various visits India, Pakistan and China; and when not travelling, family holidays were spent in Scotland with her extended family. She moved to Scotland permanently in 2003 to her husband’s family farm at Kinnettles.

In 2007, Susie read a magazine article about tea being grown at Tregothnan in Cornwall. The soil pH, the south-facing aspect, the plants, primulas and rhododendrons at the Cornish tea garden were all the same as at Kinnettles. In a true Ah Ha  moment, she felt sure if tea plants grew well in the Himalayas and Cornwall, that they would grow well in the Strathmore valley. 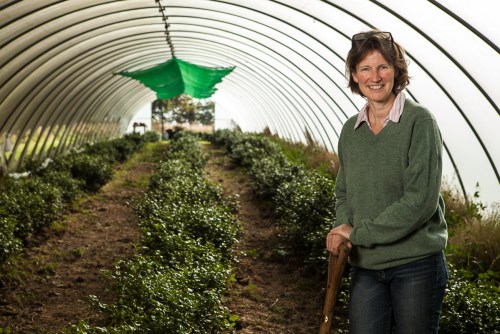 The tea is currently grown in polytunnels

That same year, Susie purchased cuttings from Tregothnan in Cornwall and her tea journey began. Like any new project there were ups and downs, and the cuttings did not thrive, so in 2010 she started growing cuttings in poly-tunnels.

The assamica bush indigenous to India is not suitable for Scotland, as it is does not like frosts and requires warmth. In 2013 Susie travelled to Darjeeling to spend a week at the Makaibhari tea garden to see the sinesis bush which would be suitable for our climate. She picked tea, spent time in the factory learning about processing and observing how the organic way of farming is so important for the tea. Lessons she brought back to Scotland. 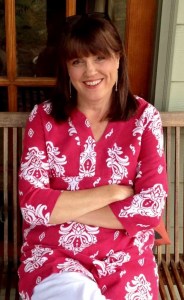 In 2014 Susie realised her limitations in processing tea and felt she had come to an impasse, so consultancy was sought from Beverly-Claire Wainwright of Teacraft, who had just returned from Sri Lanka to Scotland.

Susie is determined have a viable business and to be able to afford to pay people to pick and process the tea. Beverly has helped to make this happen. By tweaking Susie’s techniques, setting up rigorous note-keeping and suggesting different ways to get the best out of the leaf, she has taught Susie to make a tea that works for the leaf.  It was also very important to grow from seed to establish good strong plants rather than use cuttings. This is how Kinnettles Gold single estate tea was created.

Currently Susie and Beverly are working together to expand tea growing in Scotland. Susie and eleven other walled-garden owners in Angus, Fife and Perthshire are importing tea seed from Nepal. Walled gardens provide a perfect micro-climate for tea-growing. In January 2016 the tea seeds will be planted in all eleven walled gardens, with Beverly’s guidance. It is hoped tea will begin to be recognised as a viable Scottish crop.

Beverly Claire Wainwright started her career in tea after volunteering in Sri Lanka and where she subsequently became involved in turning a tea estate round – starting from the basics to building a tea factory. When Fortnums ordered 15 kilos of tea everything was being done by hand in small quantities – a tea processing factory had to be built which she achieved. She is currently helping with a tea project in Mississippi.

Taste the tea for yourself 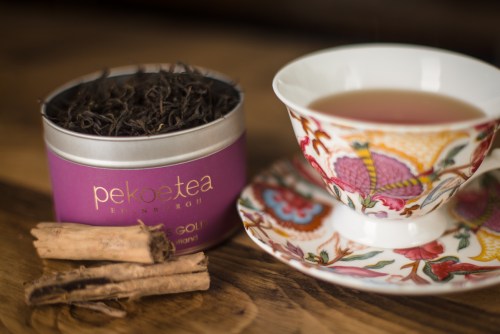 With just 2 kilos of Kinettles tea available this year, if you want to try some head to Pekoe very soon. The tea is available for pre-order online to be distributed on Friday 20th November 2015.

The tea will retail at £2500 per kg. One and a half kilos of Kinnettles Gold is being packaged in numbered limited-edition 20g tins priced at £50 each. The remaining 500g is being kept for sampling and referencing. For a perfectly-brewed cup of Kinnettles Gold, visit PekoeTea in Stockbridge where a limited number of cups will be available at £15 per serving.

Personally, I cannot wait to enjoy another cup and who knows, that film might just be made!

Photographs of Susie and Beverly courtesy of Mitchell Magregor PR.